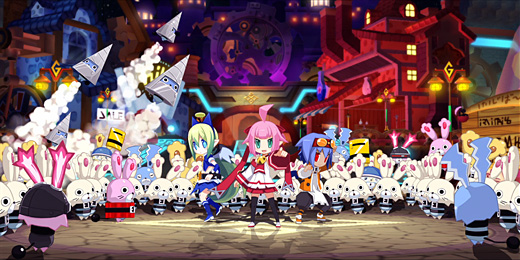 HIGH Charming an entire group of enemies at once, turning them all into adorable bunny creatures!

LOW Do "something" do get a better ending? What does that mean?!

WTF So many bath scenes!

I thought my experience with Japanese role-playing games (JRPGs) had inured me to their flights of fancy—the bizarre plots, the random settings, the excessively sexualized female characters. I had gotten used to it for the most part. I even began to accept that as I started each new game, I was inevitably going to be submerged in strangeness. There was no use fighting it. Then I booted up Mugen Souls

and discovered that I was going to be playing as Chou-Chou, a god not simply satisfied with having created the various worlds of a galaxy, but who also wants the denizens of those worlds to bow before her awesome perfection. How does she intend to go about this? By flirting with them!

It was then that I realized I would have to reset all of my definitions for craziness.

A brisk and wacky JRPG, Mugen Souls follows Chou-Chou on her journey to bring seven planets (each one representing a stereotypical video game setting) under her rule, gathering teammates as she goes by using her powers of transformation to better conform to her subject's fetishes.

(Note: none of what I just wrote is a joke.)

Mugen Souls's greatest strength is probably the fact that the storyline is presented in such a breezy and upbeat fashion that it's almost possible to completely overlook all of the creepy things going on in the text.

After descending to one of the planets, I was disappointed to discover how stripped-down the game is from a content point of view. Each one is broken up into three maps that are almost entirely linear. There are no secrets to discover, or rewards for exploration, just respawning monsters that wander around aimlessly while looking to pick a fight. Other than moving from one scripted plot sequence to the next (all helpfully noted on the in-game map), there's nothing to actually do—I played through the game twice and didn't see the barest hint of a sidequest anywhere. 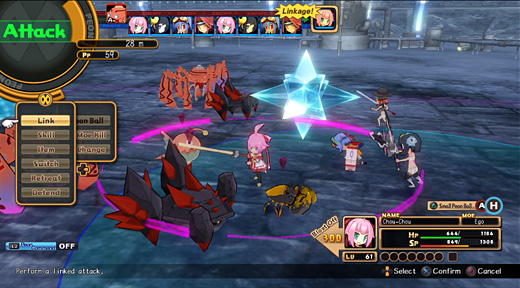 The one additional task posed to players is to flirt with the map itself, and thereby convince it to move closer to the next map, allowing movement between them. It's a cute idea, but hampered by some bad game design. To woo the various key spots on the planet, players are required to either flirt using a specific personality type, to have defeated a certain number of monsters, or to make an offering of gold equal to the price of a certain item or weapon. It's this last one that causes problems, as most of the items whose price the player is asked to match aren't available for purchase until long after that area has already been cleared. The only option is to guess a random amount of gold—with a forced fight being the punishment for any wrong guesses.

On the upside, the game's combat engine is both fascinating and surprisingly deep. Each turn-based battle takes place in a small arena, with the player being free to move their characters around and attack within a certain radius. Two elements separate Mugen Souls from the average JRPG combat experience—the Moe Kill system, and just how largely character placement fits into the proceedings.

'Moe Killing' is how the game allows the player to use Chou-Chou's flirtiness to instantly defeat foes. Each time her turn comes up she can charm anyone within her attack range by choosing from three menus of different flirting techniques. The player must decide which actions to take based on a wide variety of criteria—each enemy is assigned one of eight different personality types, and transforming Chou-Chou into the same type offers an immediate affinity boost.

However, it's not simply a matter of being a ditz with the flighty enemies or being a masochist to woo the whiny ones; combat is complicated further by every enemy having a number of different "mood" states. While acting bipolar to a normal bipolar enemy will result in a huge boost, if the enemy is sad or agitated the attempt will backfire. It's a surprisingly complex system to get a handle on, but it's more than worth the effort—each enemy has three status bars that the Moe Kill adds to, and if an enemy's bar is filled positively they either instantly transform into a follower or a valuable item. If the negative bar fills up, all of their stats massively increase, turning them into a far deadlier foe.

Enemy placement also plays an equally transformative role in combat—in addition to basic attack range considerations, each combat field is littered with magic floating status crystals. Any PC or enemy standing close to one feels its effects, from health regeneration to movement limitation, all the way up to complete imperviousness to attack. Using these crystals becomes an important part of gameplay when combined with the game's other unique system, the "blast off." 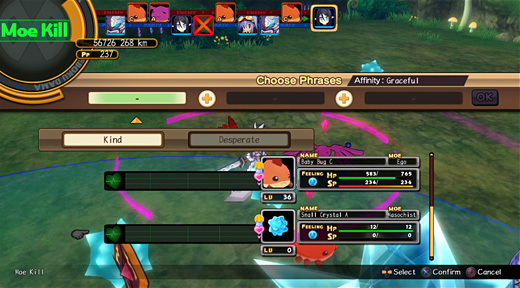 While physical attacks just damage opponents, every spell or special attack has the potential to send opponents caroming around the field—and because the player gets to decide exactly how much force they want to strike with and what angle they want their enemy to fly off in, Mugen Souls is equal parts JRPG combat and billiards sim. This kind of extra strategy is unusual for the genre, but it adds a lot of depth, and kept the fighting interesting for the entire length of the game.

Speaking of length, Mugen Souls isn't that long, unless the player wants it to be. In this respect, the game is unique in just how much importance it places on its 100-level challenge dungeon, the "Mugen Field."

While a player might make it through the entire game without ever having a level 100 character, in the Mugen Field, things can quickly escalate beyond all reason or sanity. Players "bet" a certain amount of points when starting out in the dungeon, and this amount determines what kind of monsters will be encountered, and what level those monsters will be.

There's something inherently satisfying about taking level 1 characters hitting for 50 points of damage per attack and grinding them into level 4000 characters who are more than capable of dealing 5 million point super attacks, but Mugen Souls fails because it never adequately expresses a purpose for that kind of absurd character advancement. The monsters in the main quest never increase in power, so with just a few hours spent in the Mugen Field a player will be at a point where any one of their dozen main characters could beat the entire game without any trouble at all. I appreciate the option of massively over-levelling, but other than tracking down and killing couple of post-game secret bosses for an achievement, there's no real reason to spend the ridiculously amount of time it takes to do so.

is one of the craziest JRPGs I've ever encountered, with great character design and truly bizarre humour on display. While the combat system may be one of the most interesting in the genre, the game just isn't long enough or deep enough to give the player a chance to explore its interesting innovations. Flirting monsters into submission was an innovation I never expected to come across, and the game's story certainly has a lot to say about its unique main character, but the game just isn't up to delivering on the implied scope of its premise. Without the kind of stage this story requires, all players are left with is an amusingly iconoclastic oddity, worth trying out, but not falling in love with. Rating: 6.5 out of 10.


Disclosures: This game was obtained via publisher and reviewed on the PS3. Approximately 90 hours of play was devoted to single-player modes (completed 2 times).

Parents: According to the ESRB, this game contains fantasy violence, language, mild blood, partial nudity, sexual themes. It's a game largely about dressing in costumes to appeal to people's fetishes. That's just… yikes. There's some mild swearing as well, minor injuries depicted in cut-scenes, and some incredibly scandalous costumes. The sexualisation of the characters I mentioned above may also be an issue. While issues of romance and attractiveness are treated in a light and playfull manner, it's impossible to overlook the fact that every character in the game is slotted into a category based on what particular fetishes fire their libido. A lot of the conversation in the game revolves around who is attractive to who, and which of their physical attributes/personality traits is responsible for those feelings. Also, everyone's breasts are extensively discussed, to the point of a seeming fixation on the part of the developers. And speaking of, this is the big one—one of the characters has a pose in which, during conversations, a nipple seems to be exposed. I've been assured that what we're seeing isn't actually nudity, but rather a bit of oddly-coloured reflected light. I can only speak to what it appears to be, however, and the game definitely seems to have nudity in it.

Deaf & Hard of Hearing: All of the game's voluminous text is subtitled, and all you'll be missing are the voice actors' performances.