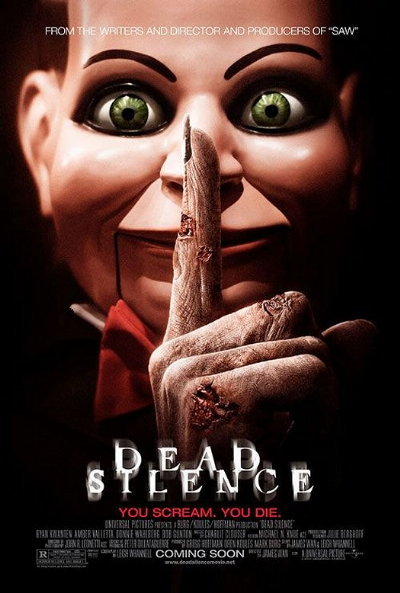 This isn't going to be a review per se. In that I'm not going to go over the acting or the direction or the production design or any of the things about the movie that work. No, I'm just here to point out a couple of story points that not only don't work in the film's favor, but actually render it dramatically incoherent and in the end, totally unsatisfying.

That's right, I'm going to be giving away the ending of both this and Saw, so if anyone reading this hasn't seen either of those, and wants to go in fresh, please save this for later.

Dead Silence concerns a ventriloquist so insecure about her talents that when someone dares to question her ability, she murders him and turns him into a giant flesh-puppet. Then, when a possee tracks her down and kills her in retribution, her ghost pulls a Freddy Krueger and decides to murder every single family member of every person involved in the assassination over the next sixty years, she's so thorough, in fact, that we discover her firm belief that life begins at conception.

With his wife mysteriously murdered just moments after a creepy dummy arrived at his house, our hero Jamie returns to his hometown, which, not coincidentally was famously haunted by the spectre of the murderous ventriloquist mentioned above.

Jamie arrives at his father's stately manor and meets his new step-mother, who informs him that his father has had a stroke and is now wheelchair-bound. This leads to the flim's one really effective scene: Jamie has a conversation with his clearly-dead father while his 'step-mother' stands next to the father, operating him like a ventriloquist's dummy. It's creepy, and it's effective, and it sets up an ending that it never bothers to deliver on. See, the film doesn't seem to know that it's amazingly obvious that daddy is dead and the wife is the ghostly ventriloquist. This is a problem, because the character of 'step-mother' serves literally no purpose in the script other than to, at the end of the film, be revealed as the villain. She doesn't impart any information to the hero, or uncover a clue, or seem overly concerned about all the murders. Nope, she's just there for a reveal at the end.

And what a reveal it is – thinking that he's saved the day, Jamie comes across a book depicting the 'Perfect' dummy, realizes that it's his step-mother, then spins to see her approaching. She says something very stupid and then kills the hero. Movie over.

That's something of an abrupt ending, no? If it sounds familiar, it's because it's the EXACT SAME ENDING as the last ten seconds of the movie SAW. In that film, a corpse stood up, revealing that he wasn't dead, said something stupid, then slammed a metal door, leaving someone to die of thirst. In that film, though, the abrupt ending worked because it was a real surprise. By establishing the killer first as a corpse lying in the middle of the room, and then making sure that the dead body served a dramatic purpose, it's kind of a shock when he reveals himself.

Because those same filmmakers failed to in any way, shape, or form divert the audience from the identity of the villain – only the mechanics of her ressurection are in quesiton – this ending feels like a cheat. We've known all along who the bad guy is, so we spend the entire film waiting for a showdown between her and the hero. Instead of this showdown, we get a summary execution. It's akin to making a Nightmare on Elm Street or Friday the 13th film that ends at the seventy-five minute mark, with Freddy or Jason murdering the last character just as the big chase scene/psychedelic showdown is about to begin. It's both an unsatisfying and utterly bewildering ending that leaves the audience feeling completely cheated.

It's too bad the filmmakers didn't craft a proper resolution to the film, rather than just rip themselves off to save time. Oh well, it's still a better movie than Scarecrow Gone Wild.

And on an unrelated note, next season on Lost, if they keep doing fast-forwards, will they acknowledge that a film has been made about the adventures on the island, and if so, which celebrities will hilariously cameo playing the characters in the film-within-a-show?