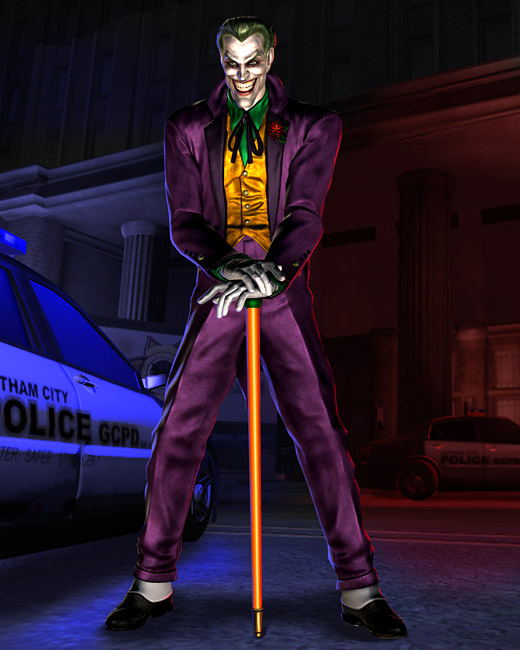 HIGH People want to play a game as Batman. This game allows them to do that.

LOW The fatalities are universally terrible.

WTF Here's a memo, Midway. I own this game. I'm not standing in an arcade with people in line to play. So, if I want to pause the game so I can look up a website to find out how to do Batman's… ugh…"Heroic Brutality"… then I should damn well be able to pause the game.

Speaking as a fan of the Mortal Kombat series, allow me to say this—we don't come for the fighting. The fighting is secondary. If we wanted good fighting, we would play Street Fighter, or Tekken, or Virtua Fighter. We accept the fighting only insofar as it adds weight and consequence to the kills. That's right, this is the one place where alarmists and congresspeople are 100 percent correct. We're only coming to Mortal Kombat games for the violence.

So where, may I ask, is that violence?

Mortal Kombat vs. DC is one of those convenient games whose title explains the entire premise. Of course, since the premise is that Midway noticed how much success Capcom was having versing the Marvel Universe and decided they wanted to rip off the idea, no new ground is being plowed.

In what may well be a unique instance in the world of fighting games, MK vs DC's strongest point is its story. It seems that the main supervillains of both universes were coincidentally teleporting at the same time, and an odd cosmic coincidence caused the two of them to turn into a single ultravillain. Even worse, this merger has caused the two universes to bleed together, leading to the imminent death of all life in the universe if "Shaoseid" isn't stopped. This means that all the heroes and villains of the Mortal Kombat and DC Universes must team up to save the day, but not before beating eight kinds of hell out of each other first. Luckily, there aren't any fatalities in the story mode, so the game's plot is never at risk of being derailed by Scorpion reducing Superman to a pile of flaming, blackened bones. 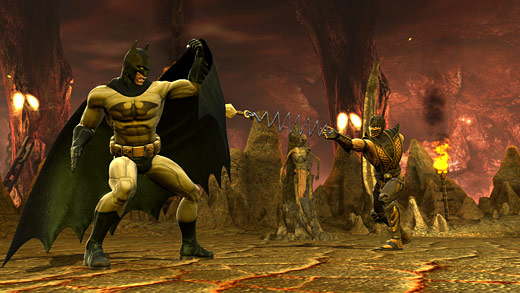 Other than the story, everything else is pretty much a wash. The combat is entirely focused on long combo strings that chain together anywhere from four to ten attacks, removing up to 50 percent of an opponent's health in a single chunk. These timing-based attacks are frustrating to learn, stressful to execute, and infuriating to be on the receiving end of. They're so annoying, in fact, that the game has two separate "fixes" to reduce the effectiveness of combos: When a player is hit, or has their attacks blocked, a meter gradually fills up two skulls. When one of them is full, a player can tap the block button to uppercut their way out of the series of attacks.If both are full, they can go into a hyper mode that not only increases the damage they dish out, but keeps them from being staggered when struck, making them effectively uncombo-able.

These additions, along with some QTE-based close combat and falling combat are nice, but they don't really get at the heart of Mortal Kombat's problems, which is that the timing and memorization-based combat system is flat out alienating to all but the most hardcore fighting game fans. It borders on Killer Instinct territory. The crazy thing is that this was clearly an attempt to create a mainstream title that would reach out and bring non-fans to the Mortal Kombat series. Making the combat alienating and unenjoyable seems at cross-purposes with the rest of the endeavor.

That's not the worst part about the game, though. No, in a stunning reversal of expectations, the worst part about this game is the one thing that, until now, the Mortal Kombat series could count on keeping it afloat: The fatalities. Other than a famous incident of Nintendo-based censorship in the first game's console version, the Mortal Kombat series has been extremely, overwhelmingly brutal, and that's just the way fans like it. I'd go so far as to say that's the only thing fans like about it. 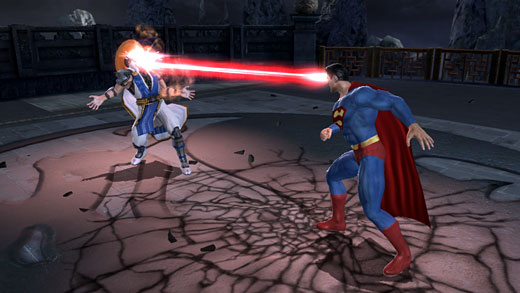 Playing through the game, I started making a list of the fatalities in hopes of writing a cheeky "gamecritics review of MK vs. DC's fatalities" piece. I quickly began to notice a theme among them, in that they were all terrible. It's bad enough that the DC heroes have "heroic brutalities" instead of kills, but even the kills were tame beyond belief. People bloodlessy stabbed and then thrown down, necks broken, headshots moved just off to the left of camera before the trigger was pulled. I couldn't understand how the game was botching its one selling point so utterly. Then I realized I'd been so excited to play the game that I hadn't bothered to look at the box. It was rated T. That's right, it's a Mortal Kombat game that isn't rated M. On the scale of misunderstanding an IP's appeal, this is just below making a Mario game full of nudity and gory decapitations.

Why can't I whip a batarang into my opponent's head to kill them instantly, and then when the opponent starts to fall backwards, the batarang explodes and blasts their head from their shoulders, splattering blood across the arena? Are they operating under the belief that children and teenagers are primarily the ones interested in DC superheroes? A quick trip to any random page on the Internet should disabuse them of that notion. Or perhaps just reading any comic book that actually features Batman. Sure, at some point in the past (it was called "the 60s") comic books were brightly-coloured, kid-oriented funbooks, but that hasn't been widely true for nearly twenty years. Batman, who once had a rogues' gallery full of bizarrely costumed oddballs who were more concerned with pulling elaborate heists than any particular mayhem, now has two different foes whose "theme" is that they brutally stab people to death.

While it's never been the biggest seller or cultural force, Mortal Kombat has chugged along profitably enough by sticking to the one thing it did well. The simple fact is, there is no more viscerally satisfying way of winning a match than by performing a fatality, nor any more humiliating way to lose one. How can a flawlessly executed combo compare to tearing an opponent's spine from their body, decapitating them in the process, then going on to use their head as a morning star to bash their limbs from their body*? Comic books are excessively violent. Mortal Kombat is excessively violent. Yet somehow the combination of the two has been watered-down to the point of irrelevance, all in the hopes of increasing the number of people who would play it.

* Dan's not sure if this is a real fatality that appeared in a game, or just a beautiful dream he had once.

Parents: According to the ESRB, this game contains blood, suggestive themes, violence. Don't be fooled—this game is still full of violence, blood, and tight costumes. Each fight still ends with a death, the only major change is that the deaths are no longer interesting.

Deaf & Hard of Hearing: Bizarrely, perhaps insultingly, the game offers no subtitles. There aren't any important audio cues to gameplay, but apparently somewhere along the way the developers decided to rob the hearing-impaired of the entre plot of the game. Considering that the plot of the game is one of the better parts, this is one hell od a loss.

i think it would be cool if they made another mk vs . dc universe game and have more than just 20 charicters like armigedon that was a kick ass game it would be cool if the hade like robin or dark wing whateverthefuck his name is,and bane or that big killer croc guy would’ve been the shit plus wtf happened to jonny cage or reptile they should have deffnitly been in that game or you should make another where the begining story comes out where more people start to come through the portal like kenchi and kung loa or… Read more »

Being severely hearing impaired, I fuckin’ hate how I cannot get an option to turn on subtitles in ANY game. I have only eyes to get a majority of info in the world and when it comes to fun….well, I like to know what the fuck the story is saying. The graphics are akin to PS2 and lip reading is not an option here as in, say, Call of Duty (4-5). I’m upset, but glad the game was only a rental. If I bought it I would return it within the week. At least I can get trophies easily enough… Read more »

the game is a failure. i will wait for awhile before i even think about buying the next game. they fucked up with the shitty fatalities. and dark khan was dumb. they only gave us 25% of the characters we wanted. its a t rating. i am an adult i have played this game since game gear the firs time now you have just killed it for me. I am so pissed at you. Dont ever make another mortal kombat game again pls you should have just made it dc vs dragonball z……final words: i wanted violence and what i… Read more »