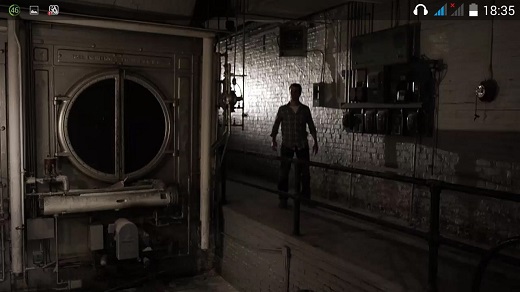 LOW Wow, does this police interlude add nothing to the game!

WTF Where could the batteries be? Could they be the crudely-drawn cartoons sitting
atop that real photo of a cabinet?

Somewhere in Montreal a man has been kidnapped by a plagiarist determined to live out the plot of a Saw film, and it's up to the player to guide him to his freedom by solving a series of puzzles over the course of about twenty minutes.

What's the twist that separates this from other adventure titles? Missing is an FMV game. Every location the player finds themselves in is rendered with digitally-altered still photographs and most of his actions (and all of the story) is done with video clips. Yes, like The Tesla Effect, Missing is a throwback to the heyday of interactive movies, although one with far more modest ambitions.

Technological advances have been incredibly kind to the interactive movie genre. Gone are the days when players had to make choices from well-composed menus and then be immediately jarred when low-resolution video clips started up in response. With improved video compression and increased media storage, players can now expect story segments with the visual fidelity of a Syfy original movie. That's not a high bar to be sure, but it's one that FMV games of the past couldn't dream of surpassing. At the very least, things are headed in the right direction.

Sadly, Missing's tech is better than its tale. I'm not exaggerating with comparisons to Saw; the only possible motive for the main character's kidnapping is that he's a businessman who doesn't appreciate his life enough. The game isn't able to match its inspiration, though—it lacks cleverly diabolical traps and a villain who can always be counted on to spout insane-yet-compelling nonsense.

In this first of the game's as-yet undetermined number of chapters, the villain is completely absent and the setting is a basement. Not a basement that's been retrofitted into a villain's lair full of traps and obstacles, just the type of ordinary basement one might find under any office building. The only alterations have happened in post-production, with elaborate puzzles placed over the real-life deadbolts that hold its actual doors shut.

At least the puzzles are competent—they're simple affairs, with the player doing some pixel-hunting to find a part of the screen that can be manipulated, then engaging in a basic sliding block puzzle. In fact, Missing actually does a good job of keeping its activities grounded in the reality of the story. There are hidden codes to be ferreted out, gas valves to shut off, and ticking time bombs to dodge. It all makes sense, even if it lacks any real tension. The situation is too vague and the obstacles too mundane for it to feel threatening until the very end, and by then it's too late since the game stops on an abrupt cliffhanger before anything is resolved.

Perhaps the single most representative bit in Missing is a sequence where the player is asked to search through a few screens looking for items to repair a device. During this little chore, the artificial elements inserted into each scene are painfully obvious, even to the most casual observer. Missing just isn't able to merge its game and movie halves in a convincing fashion.

Keep in mind that this is just the first chapter and it's possible that a compelling story with more interesting puzzles is coming down the pike, but until chapter two arrives to change my mind, I'm going to have to call Missing an interesting failed experiment in reviving the FMV genre. Rating: 4 out of 10


Disclosures: This game was obtained via publisher and reviewed on the PC. Approximately 40 minutes of play was devoted to single-player modes, and the game was completed. Twice.

Parents: This game wasn't rated by the ESRB, but it contains: mild language, violence. While the game may draw its inspiration from the Saw franchise, there's no gore or hyperviolence on display, just a guy chained up in a building that's about to explode. So maybe call this one T rated.

Deaf & Hard of Hearing: You should be fine—there are subtitles for all of the character dialogue, and no audio cues!