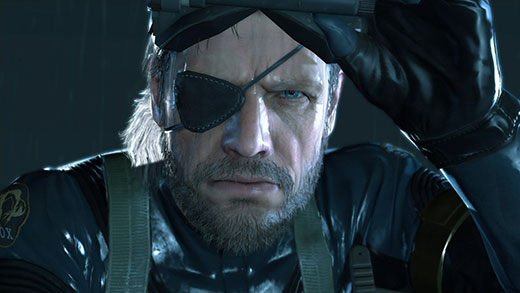 HIGH Grabbing one Marine by the throat and shooting his friend in the head while slo-mo rain pelts the scene.

LOW How long am I going to have to wait for the resolution to this cliffhanger?

WTF One of the side missions is longer and more intricate than the main game.

by thumbing his nose at all the detractors who accuse him of being more interested in making movies than video games. Using a single ten-minute-long unbroken camera shot to introduce the characters and environment is a brilliant choice, especially when scored to a song chosen to highlight its themes. With this, the stage is set for another MGS gabfest with almost no gameplay, but it's a mislead. When the player is dropped out of the movie and into the game, it's revealed to be a completely new animal offering the feel of Metal Gear combined with a freedom previously unheard-of in the franchise.

The advance promotion for Ground Zeroes billed it as 'MGS goes open-world', and that wasn't just hype. While the game may only take place on a single map, that map feels larger than the combined square footage of Guns of the Patriots. All of the sneaking Metal Gear is known for is still present, and if players want to toss an empty magazine against the wall of a building and then crawl past a sentry while he's looking the other way, they're free to do so. What sets this installment apart is that they also have the option of taking out a sniper rifle and shooting that guard from three football fields away.

While otherwise similar except for this freedom, gone is the 'soliton radar' that gave players a way to dodge enemies that were out of sight. In its place is a tagging system—any enemy can be highlighted with binoculars or a weapon's scope, causing a marker to appear over their head. This marker persists until the enemy dies or leaves the area, allowing the player to simply sweep their camera around and get a sense of enemy concentrations and sight lines. If an enemy is missed, Boss also has a 'snap action' advantage when spotted by a foe . When the iconic question mark is present over the head of a foe, the game goes slow-mo to allow a couple of seconds to somehow incapacitate the guard before he can scream for help and wake up the whole facility.

The enemy AI is well handled, with guards being gullible enough on Normal difficulty to make play accessible without feeling too easy, and just sadistic enough on Hard to make things challenging without being unfair. Combat balancing is the same as ever, with Boss's CQC melee skills enabling him to take down one or two enemies without any difficulty, but should a firefight break out, players have to flee and hide, even with the advantage of progressive health replacing rations and autosurgery.

So the gameplay is a clear step forward for the series, but what about the story?

Set soon after the events of Peace Walker, the game sees Big Boss (confusingly called 'Snake' by a subtitle, even though everyone always calls him 'Boss') heading to Guantanamo Bay in the hopes of rescuing members of his team from torture at the hands of the US government. Yes, the plot is Kojima at his most archly political, but what little story this hour-long adventure has (yes, you read that right-the campaign is only an hour long) is so emotionally resonant that its messages never feel didactic. The game manages this by eschewing twists and reveals. The whole story is laid out up front, giving all its developments a harsh feeling of inevitability.

From the first moments, the player is told outright that things are not going to end well – Big Boss is walking into a trap, and while he's busy attempting the most futile rescue mission in history, Skull Face (the game's new villain) is off destroying everything that Boss has built.

Unfortunately Big Boss isn't privy to the information the player has, leaving him to do what he's always done and play the hero, but it then asks what use heroics are in the world of Metal Gear?

This is by far the series' darkest entry, exploring the concept of martyrdom in a literal and visceral way. Without giving away the entire plot, all I can say is that one of the characters experiences something terrible onscreen, and it's absolutely excruciating to watch.

While the campaign only takes about an hour the first time through and can easily be beaten in around twenty minutes during a replay, there's a decent amount of bonus content aimed at using the sizable play area to its fullest.

For example, there are a series of bonus missions showing off the map in lighting conditions other than the nighttime hurricane during which Ground Zeroes is set. Players can sabotage facilities, extract information, and even play a rail-shooter to rescue a very special guest star. There's also a giant amount of backstory-rich audio tapes to track down and enjoy, and an extensive set of online leaderboard challenges for each mission.

For those wondering whether last-gen machines can provide the same experience that can be had on the PS4 and Xbox One, I did a side-by side comparison of the PS3 and Xbox One versions. Surprisingly, there aren't very many differences between them. The graphics aren't terribly worse on the PS3, and the only performance issue is a marginally shorter draw distance, which barely affects gameplay. In the end, the only major disparity is the graphical drop-off between the opening movie and the actual gameplay. On the PS3 it's a little jarring, but on the One it's barely noticeable.

extremely short? Absolutely. Is it still worth 30 dollars? Also absolutely. I've played dozens of longer games that didn't offer as many thrills as this does in its single hour. This entry is a huge accomplishment which makes the argument that the Metal Gear series isn't just still relevant in the world of modern open-world action games, but that it has the chance to be at the forefront of them. Rating: 8.5 out of 10


Disclosures: This game was obtained via publisher/retail store and reviewed on the PS3/Xbox One. Approximately 12 hours of play was devoted to single-player modes (completed 6 times).

Parents: According to the ESRB, this game contains blood and gore, intense violence, sexual violence, strong language. Just look at those ESRB warnings. This is a game for adults only. Don't let your children near it. The violence and swearing are so omnipresent that the ESRB didn't even notice how many guards pause for a smoke break during their patrols.

Deaf & Hard of Hearing: I don't envy you attempting to play this game. Dialogue is subtitled, but audio cues aren't, and a decent amount of the stealth is predicated on players being able to hear footsteps and approaching jeeps. The 'tagging' function will help a little, but it's going to be a challenge if you choose to accept this mission.

Is Ground Zeroes extremely short? Absolutely. Is it still worth 30 dollars? Also absolutely. I’ve played dozens of longer games that didn’t offer as many thrills as this does in its single hour.

By your logic you’d celebrate a new market model whereby all good games could be just an hour or so long and cost $30 as long as they were entertaining or at least a few levels better than bad ones. Then again, maybe you haven’t thought your way through things, although it’s also possible you have some undisclosed interest in this game.

Not trying to speak for Dan here, but there’s no logic in thinking ‘more = better’. Just because something’s short doesn’t mean that it’s not good, and I can think of a million games that were far longer than they should have been. Gone are the days when a hundred-hour experience was the only one worth buying – plenty of gamers have jobs, families, and responsibilities outside of gaming. if raw hours is what someone’s after, more power to ’em. as for me? i’ll take something short and amazing over something that devours a month of my life with filler… Read more »

I understand your position Brad but I just worry that this could become the status quo to some extent. And I wonder if all those defending this would be okay if tomorrow all game companies followed suit.

If a gamer is informed of what he’s buying I don’t have a problem with companies selling what they want, but this just strikes me as a money grab.

Glad my comments were finally published, I thank you, and you could’ve just left one as I repeated myself.

Thanks to all you guys for this site.

“Is Ground Zeroes extremely short? Absolutely. Is it still worth 30 dollars? Also absolutely. I’ve played dozens of longer games that didn’t offer as many thrills as this does in its single hour.”

That bad games are not worth the money makes a good but incredibly short one worth it? That’s like saying a 5 minute very entertaining movie is worth $10 because longer awful ones cost the same. As I tried to post before, buying this game in large numbers bodes poorly for the gamer.

Excellent review. I hadn’t planned on buying this as 30 dollars for a two hour game seemed ridiculous to me. What made it worse was that most reviews either glanced over this problem or said that it didn’t matter.

Reading this, however, has changed my mind and I will definitely be purchasing it.

Great stuff as usual, Dan. Just ordered the 360 disc version because I love my physical media. Haven’t liked the series since its peak in MGS3 but this sounds so cool.

I saw Angry Joe’s review on Youtube and he says Konami is having people shell out a lot of money for what is essentially a demo which is wrong and could set a bad precedent if people buy this game in big numbers. Any thoughts on this?