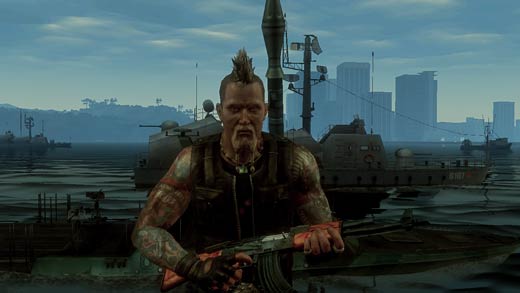 So here I am three years later, reviewing another Mercenaries game, marvelling at the futility of my avocation. The duty of the video game critic is to inform people about a game's successes and failures, as well as to hopefully provide some deeper insight into the experience. That being said, I've always hoped, and I wouldn't be surprised if there were other critics who felt this way, that when I point out glaring flaws in a game, if that game managed to get a sequel, that maybe, just maybe, someone would have seen those points I made, and next time around, those problems might have been fixed. It's never happened, nor do I expect it to—but that little glimmer of hope makes a game like Mercenaries 2 all the more disheartening to play, because somewhere in the back of my mind I can't help but think that if the developers had gotten a look at the review, then they wouldn't have gone and made every single mistake over again the second time around.

A 3rd-person open-world shooter just like the first game in the series, Mercenaries 2 finds the titular money-obsessed mass murderers headed down to South America in the hopes of turning a profit off of local political instability. For some reason, though, the developers felt that a profit wasn't enough to justify all of the bloodshed this time around, and decided to give them an extra reason for going after the self-appointed president of Venezuela. That motivation? The main character is shot in the rear end while escaping from an ambush by some of the President's men. So yeah, the game doesn't really raise the bar for storytelling.

One of the key elements of Mercenaries 2's gameplay is the disguise mechanic, which allows players to drive enemy vehicles and appear to belong to that faction while remaining inisde them. Just like last time, this system is completely broken, because firing a weapon causes the disguise to go away, even if an enemy fires first. So while the fact that I'm flying an oil company helicopter is a good enough disguise that it makes the Marxists want to shoot at me, if I shoot back at them, they'll instantly know it was the ‘Freelance Mercenary' that was doing the shooting, not some oil company stooge. 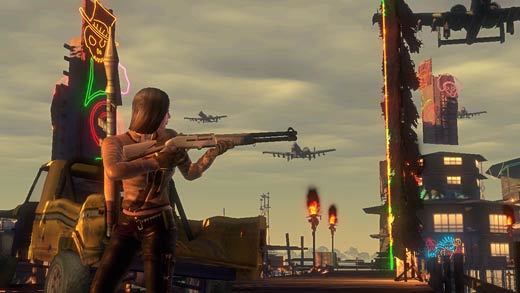 Apparently the developers saw the problem, though, and at least made a stab at compensating for it. Since nearly every mission in the game involves the player shooting at one faction at the behest of another, it's very difficult for the player to stay on everyone's good side. Of course, in the first Mercenaries it was impossible to make everyone happy, so ‘very difficult' is actually a huge step up. In a concession to both fairness and realism, shooting a person doesn't instantly make that person's faction hate the player—their opinion only turns sour if a witness to the murder phones it in. Luckily, the enemy attempting to do that is always shown on the player's radar, giving them the opportunity to execute all the witnesses and keep their reputation intact.

It's nice that the developers went back and fixed something about the first game, but it almost seems like wasted effort when they failed to make the rest of the game compelling in the least. Part of the problem is just how small the game is. Not small in size, obviously—the approximated map of Venezuela does offer enough space that travelling around it would be a chore without a helpful helicopter pilot to fly the player to locations instantly—but more in the lack of organized missions the player is offered. There are five factions in the game that can give missions, but right off the top one of them is a wash, because the only missions that the ‘Pirate' faction can offer are races. While fun, they're not exactly the kind of meaty experiences people expect out of a game like this. The other four factions only have three missions to offer as well, making the game roughly 12 missions long. Sure, there are other ‘open world' things to do, like destroying buildings and capturing High Value Targets, but while mildly diverting, they're too repetitive compared to the elaborate action setpieces of the story missions.

The repetition in targets makes the restrictive gameplay all the more frustrating. Mercenaries 2 is a game that can only be played a single way: Rushing in and blasting away. I'm not suggesting that there should have been stealth missions added to the game (heaven forbid), but no sneakiness of any kind is possible at any point in the game. Given how heavily the game pushes the player to use air strikes, it would be nice to be able to creep into an enemy encampment, mark a target for demolition, and then flee as the bombs drop. Sadly, this is impossible—if an enemy is within visual range of the player (that is, they exist within the game's draw distance), they can automatically see the player and fire accurately at them. At first this seems like a challenge, but it quickly grows tiresome, especially since every third enemy wields a rocket launcher. The novelty of constantly being buffeted by RPG rounds from somewhere off-camera quickly grows stale, and anyone who plays the game will quickly learn to rely on their character's ability to survive monstrous explosions through the power of unrealism. 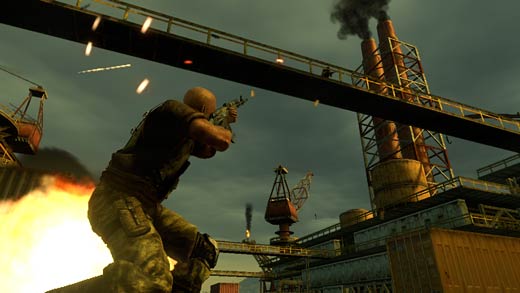 At some point, I realized the only way I was going to make any progress was to just focus on using helicopters as much as possible. This strategy led to its own set of problems. Not because the helicopters don't control well—actually, it's the opposite. The game's helicopters are so effective that the game's difficulty level drops to almost nothing. The only thing that can hope to resist the player in a helicopter is anti-air vehicles and stinger missiles, both of which are surprisingly rare on the world map. Even those threats can be nullified through the simple application of camoflage. Enemies will let a friendly-looking helicopter fly right into the heart of their base without batting an eye. From there it's the easiest thing in the world to destroy the one or two pieces of anti-aircraft defending the location, leaving the helicopter free to methodically slaughter all of the remaining troops, a steel dragon roasting all of the helpless villagers.

Even worse, proper application of a disguised helicopter makes almost every mission in the game optional, as the player can simply fly over all of the carefully-laid defenses on the way to their target and get right to the destruction. This wouldn't be such an issue if helicopters were at all hard to get ahold of, but that's just not the case. Not only can the player buy any faction's helicopter with very little trouble, but early in the game they're given a Just Cause-style grappling hook, which makes the most daring and impossible feat of the first game, hijacking a helicopter, just as easy as stealing someone's jeep. Mercenaries's biggest problem is that its difficultly level never finds a happy median: Ground combat is frustrating to the point of hair-pulling, air combat is so easy that it almost feels like cheating.

Faced with myriad balance problems and design flaws, I couldn't help but wonder why I was liking Mercenaries 2 so much less than the first game, when, other than a few improvements to the faction system, they're essentially the same game. So I went back and read my review of the first title, and realized that there was a prefectly good reason I gave the first game a pass. It allowed players to input a code and play the game as Han Solo. Apparently, I'm still such a sucker for Star Wars that that was enough to turn my fancy towards the game. In sharp contrast, this game was not published by LucasArts, so neither Han nor Indy was available. Without the distraction that lovable licensed characters provide, I was faced with the inescapable conclusion that Mercenaries 2 was a mediocre title, suitable only for those who fantasize about using attack helicopters to slay entire countries. As long as they don't bore easily.  Rating: 6 out of 10 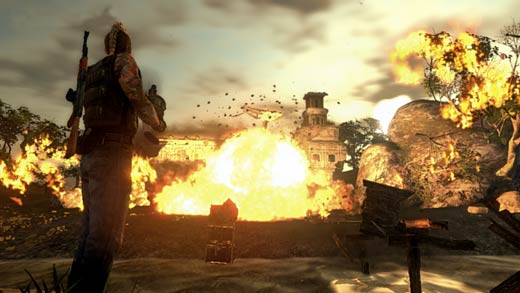 Disclosures: This game was obtained via the publisher and reviewed on the Xbox 360. Approximately 15 hours of play was devoted to single-player modes (completed 2x times) and 3 hours of play in co-op multiplayer.

Parents: According to the ESRB, this game contains language, use of alcohol, use of tobacco, violence. What the content descriptors don't tell you, though, is just how absurdly violent the game is. There's no content to the game beyond using explosives to blow up people and buildings, and despite the fact that the game contains no depictions of blood or gore, the fact that it's omnipresently violent can't be ignored. Frankly, I'm surprised by the T rating.

Deaf & Hard of Hearing: Will have the normal problems that action games pose: i.e not being able to tell they're under fire until they're actually being shot. All of the dialogue is subtitled, though, so you should be able to follow what little plot there is without too much trouble. Luckily, the game's radar does a good job in marking larger threats on the map, so you'll never have to worry about a tank or helicopter sneaking up on you.

Some of your ideas seem contradictory. You mentioned that no sneakiness is possible in the game yet there is the existance of the camouflage system. Perhaps you want to more specifically define what “sneakiness” means? Otherwise, quite a balanced article though its leaning more towards its bad points.