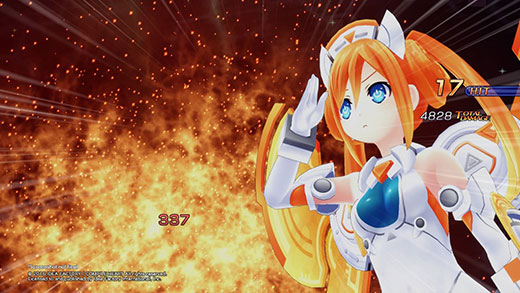 HIGH Your sidekick is a Seaman!

LOW Getting 1-shotted by every monster in a dungeon that I had no idea I was too low-level for.

It's easy for a long-running series to become lazy and self-perpetuating. Fans expect similar plots, enemies and settings, so the urge to present a familiar product can be tough to fight, especially when there's no way of predicting whether taking risks will delight or alienate existing customers, let alone attract new ones. The Neptunia titles are particularly egregious offenders on this front.

I've played all of the main games in this series, and I'm still a little shocked by how brazen the developers are at recycling assets. I'm used to seeing monster models over and over, shared between development studios for re-naming and re-coloring, and sequels even pride themselves on bringing back old favorites time after time. If I'm fighting the exact same enemies in the exact same places though they may be at higher PS4 resolutions, how is this even a new game?

The answer lies in the game's story, which is a high point for the series.

Previous titles frequently had comments to make about the various game companies they portrayed as playable characters, and even the game industry as a whole. Hence Neptunia's premise of being an adventure set in the kingdom of 'Gamindustri'. VII goes one step beyond previous entries by openly characterizing its plot as a reassessment and strong defense of the Sega Dreamcast. Younger players may find some of the references baffling, but as someone who remembers the DC, it's fantastic to see the heroine representing the system with a Seaman as her main sidekick.

The game is resolute in making the case that the Dreamcast was a console far ahead of its time, pioneering technology that would go on to redefine the industry. The story (which follows the now-standard plotline of having the heroines de-powered and forced to regain their status) is elevated by this metanarrative about Sega's last foray into the console market, It will prove intriguing and perhaps even a little touching to anyone who lived through the death of that company's hardware division.

As for VII's game mechanics, they're as solid as ever, with a few clunky caveats. The turn-based combat is still dynamic and strategy-intensive, with heroes and enemies alike needing to carefully position themselves to better maximize their weapons' field of fire. Sadly, there's no way of knowing what kind of capabilities enemy attacks may have, so there's very little strategy involved in defensive positioning beyond 'don't bunch up the fighters'. Overall, the fights are generally solid, with complicating details such as multi-person special attacks and breakable enemy armor keeping things from feeling like a straight numbers game.

The game's biggest problem is the leveling system. Only characters actually taking part in combat receive experience, with a maximum of four characters per fight. This can easily lead to a situation where most of the characters get neglected while a few get power-leveled. The game tries to mitigate this by breaking the mid-section of the story into four separate adventures where each heroine gets her own party and plotline, but once everyone is back together there's never a convincing argument for why players shouldn't just stick to their favorites.

With an interesting plot, likeable characters, and gameplay that manages to hold up to the series' standard, Megadimension Neptuna VII is the best entry yet. While it would be nice if the developers put a little more work into variety, the seeds of greatness are clearly here—when the areas aren't just generic 'forest' or 'building' settings, the game manages some accurate parodies of Mario, Spelunker, and early dungeon-crawlers. If all the enemies and locations were as well thought-out and intriguing as the narrative, this would be an incredible series, rather than just a very good one. Rating: 8 out of 10

Disclosures: This game was obtained via publisher and reviewed on the PS4. Approximately 40 hours of play was devoted to single-player modes (completed 2 times).

Parents: According to the ESRB, this game contains fantasy violence, language, partial nudity, suggestive themes. You might want to restrict this to older children. While it isn't as violent or intense as the previous game in the series, there's still plenty of nudity, bath scenes, and debates about breast size. What little swearing appears is fairly harmless, and the violence, as ever, is restricted to preposterous swords and guns making flashes as they strike obviously cartoonish enemies.

Deaf & Hard of Hearing: You won't have any trouble at all. There are no audio cues, and every line in the game is presented through text, so there's no chance of missing out on any story information.

Colorblind Modes: The game shouldn't provide any special challenges. The only color-coded thing in the game are the attacks that make up the characters' combo attacks, designating which element is being used. Luckily each elemental attack also has a distinctive logo, as well as a name which often references the type of magic being used, so you should be fine.