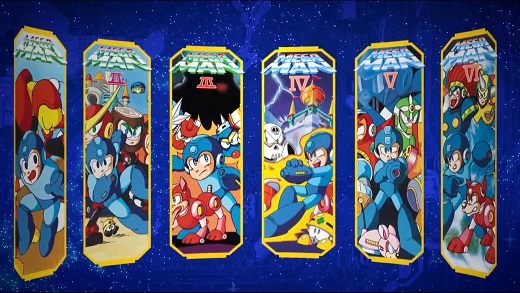 HIGH Finding out I'm still able to cheat my way through Yellow Devil and the first Wily Tank.

LOW The Alien. Maybe the most annoying boss fight in the series.

When it comes to release dates, the Mega Man Legacy Collection has rotten timing. Hitting just three weeks after the Rare Replay, it looks positively barren in comparison. Sure, it's got Mega Man 1-6, but where's the great X series? Or the amazing 7 and 8? While it might not stack up to the Replay, it's priced at just fifteen dollars, which means it's still a fantastic deal for fans eager to replay the NES entries.

Perhaps the most interesting thing about the Mega Man Legacy Collection is the way it allows players to watch Mega Man's evolution in rapid succession. For instance, the earliest game featured just six robot masters, but the series later adopted a standard of eight. Mega Man 2 introduced the Leaf Shield, and most entries thereafter feature a spinning defensive barrier. The addition of Mega Man's transforming dog Rush was also big step forward. Each new entry takes different risks in an attempt to freshen up the formula.

Another striking feature of this collection is just how consistent the games are. Beyond the recurring design elements like appearances from Protoman or the annoying disappearing bricks, there's a degree of craftsmanship on display that few other series can offer. Every year brought a new Mega Man title, and each one had rock-solid level, boss, and gameplay design. That's an amazing track record compared to other franchises in the NES era. By way of comparison, Mario only had two good games in the same timeframe. Zelda had one.

In an attempt to ensure that this collection is accessible as possible to modern audiences, the developers have added a save state function, allowing players to load their game and try challenging bosses and platforming sections as often as they want without worrying about running out of lives. A Rare Replay-style ‘rewind' function would have been even better, since going into the pause menu over and over again during sadistic platforming sections can get a little tedious, but it's hard to fault the developers for not including a feature that didn't exist when they starting working on the title.

The collection's worst facet, by far, is the technical fidelity with which the games have been presented. As hard as it may be to believe, all of these games suffer from crippling framerate issues at one point or another. These are problems that existed in the original releases, since Mega Man games were always pushing the boundaries of what each generation of NES games could accomplish, but it's a little shocking to turn on an Xbox One and find the content chugging through 8-bit blockiness. While I understand that this is an accurate recreation of the games as they originally were, I see no upside in preserving failure so adeptly. It's not like the games' habit of dropping to 5FPS is preserving authorial intent. It's a small tragedy that no one was willing to put in the work to ensure that they ran as smoothly as they could.

As for bonus content, there's an art gallery for each game, and a set of 50 challenges designed to push players to the absolute limit of their abilities. Stripped of the save states, the challenges are time trials and boss rushes that pick and choose the most difficult parts of all six games, shuffle up their order, then toss them at players who are woefully unprepared for what they'll face. Good at beating the Yellow Devil quickly? Try fighting all of the Dr. Wily Robots in quick succession. How about attempting every single game's disappearing block puzzles in a row, without any navigational aids? Or battling all 46 of the game's Robot Masters with only a Mega Buster? The challenges are pleasantly grueling, and obviously created by people with not only a great love for the series, but a deep understanding of what makes it work.

While the Mega Man Legacy Collection may be less than half the size it should be, it's still a fantastic collection of consistently great games. There's not a bad title in the bunch. Yes, Mega Man 2 is pretty strange, and Mega Man 6 is much easier than the others, but every one of them is full of brilliant level design, amazing boss fights, and the best gameplay that the NES era had to offer. I can only hope Capcom similarly reintroduces players to the SNES and PS1 era of Mega Man, because only then will the Blue Bomber's legacy get the full respect it deserves. Rating: 8.5 out of 10


Disclosures: This game was obtained via publisher and reviewed on the Xbox One. Approximately 12 hours of play were devoted to single-player modes, and the content was completed.

Parents: According to the ESRB, this game contains: mild cartoon violence. Couldn't be safer. It's robots shooting robots and no other questionable content. Let your children at it already!

Deaf & Hard of Hearing: You should be fine—what little story there is is presented entirely through text, and there are no audio cues of note.