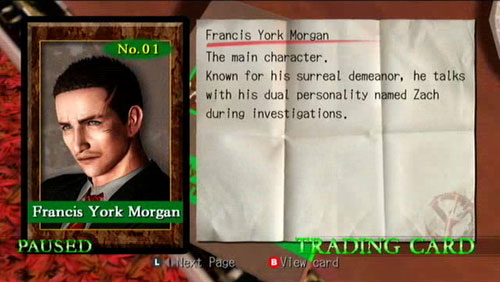 This is York Morgan—he’ll be our Agent Dale Cooper for the remainder of the running time. That’s not to say he’s entirely derivative of Twin Peaks‘ hero—while it’s true that the basic idea of the character (lone FBI Agent sent to solve a brutal crime who’s unafraid of using metaphysical reasoning when faced with mysteries) owes its existence to Twin Peaks, his specifics, and the degree to which he embraces the bizarre demonstrate clearly that the game’s writer was also a fan of the X-Files. Over the course of the game we’ll definitely bear witness to some of Fox Mulder’s characteristic glibness in the face of the bizarre and obscene, as well as Albert Rosenfeld’s famous lack of social niceties.

All this is my roundabout way of saying that, in his own way, York Morgan is the ultimate 90s TV detective.

Now, before we get to York, let me offer a quick “your mileage may vary” disclaimer. My game of the year for 2008 was Operation Darkness, primarily because it featured British Werewolves shooting rocket launchers at Nazi Dragons. So it’s entirely possible that my love of Deadly Premonition is due, at least in part, to my status as a Twin Peaks superfan. I’ve seen every episode numerous times, dressed up as Dale Cooper for Halloween more than once (and not just because it’s the easiest costume imaginable), and one of my great regrets in life is missing out on the opportunity to be Kyle McLaughlin’s camera double in a movie.

But we’re not here to discuss Dale Cooper, as fascinating as he may be—let’s meet York Morgan. He first appears in a quick tutorial dream, allowing players to learn the game’s controls while exploring a mysterious red room, populated by angelic versions of the twins who found the corpse. 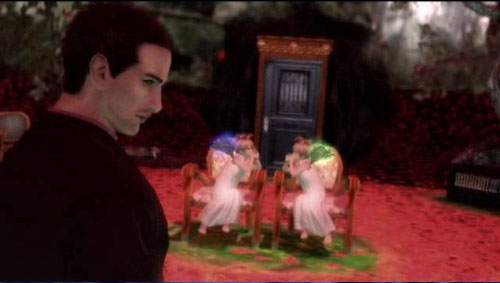 Also notable in the room is a map of the united states, with a few fat little dolls placed on it: 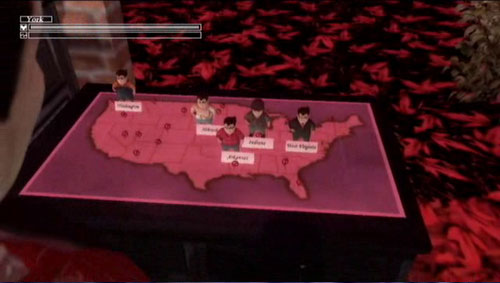 After collecting the above trading card and leaving the room, a movie begins, providing York with a proper introduction:

Maybe proper isn’t the right term there—I’m thinking more along the lines of “the best introduction a videogame’s main character has ever received”. He’s driving a classic car, talking on a cell phone, working on his laptop, and trying to light his cigarette with this: 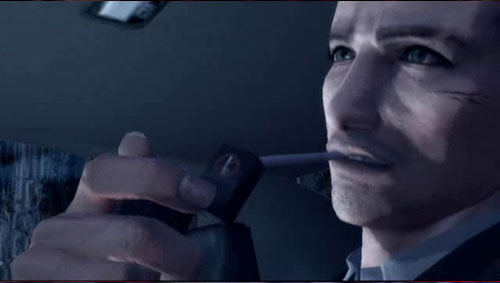 While the surface trappings of the scene are certainly fun to observe—the crime scene photos offer tantalizing clues as to the purpose of York’s trip, and take a look at these little guys: 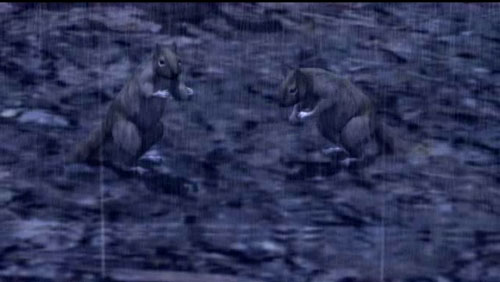 Sitting there with their real-time shadows, scurrying away from a rolling car—there aren’t any other squirrels in the game. These were designed and animated solely for this single shot in the opening movie.

But looking at the cute details, or picking apart the little flaws (York seems pretty spry for a fella that just went through a car accident without a seatbelt) can lead us to overlook just what an impressively dense introduction this whole sequence is. First off, there’s the plot stuff—we’re getting all sorts of hints about the scope of York’s case, as well as the nature of the crime, and York’s isolation from his superiors at the FBI. Far more interesting, though, is how much we learn about York’s personality in just three minutes.

The little aside about Tom and Jerry, while amusing, is far more important than the average “character has funny theory about pop culture” scene that audiences are familiar with. Take, for example, Quentin Tarantino’s extended Madonna monologue from Reservoir Dogs—it’s funny enough, but doesn’t really illustrate anything about the characters or further the plot. It’s just there because Tarantino wanted to have something funny to say. York’s cartoon commentary, while not nearly as profane, actually serves to inform us about York Morgan’s worldview. This is a man who experiences everything clinically—every person, every situation, even every cartoon is looked at as something to be categorized and labeled and set into preconceived role according to his training as a psychologist.

There’s another, more important thing to be learned about York Morgan in this scene, however: That he’s actively engaged in self-delusion. While discussing his “last case” with Zach, he remarks on his new scars. 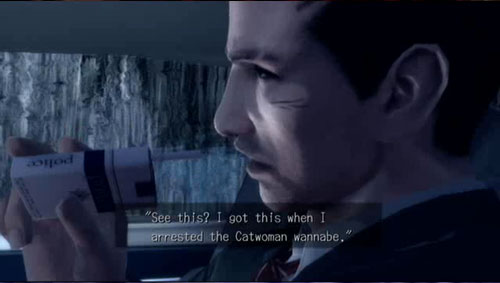 While those scratches on his cheek might well be new additions, the defining feature of York’s face is an unusual smooth patch of skin interrupting his eyebrow and extending into his hairline—and it’s clearly some kind of a scar, and not a new one. So right away we’re presented with a mystery central to York’s character: what is the significance of that wound, and why can’t he be honest with himself about it?

This movie, along with the opening cinema, provide an amazing one-two punch to the player. First they’re shown a disturbing crime scene, and then immediately they meet the fascinating man who’s going to get to the bottom of it. By the time I got to the actual gameplay I was determined to find out everything I could about this “York Morgan”, and the case that’s brought him out to the wilds of Washington state from wherever it is that he lives.

Luckily, the game would in no way disappoint me on any level where York Morgan’s story was concerned.

If you’d like to join me in not being disappointed, you can do so by simply heading over to Amazon and ordering a copy of it. For less than twenty dollars. That’s for a new game. So you have no excuse to not buy it.

In fact, I’d suggest you do it as soon as possible, especially because next time we’ll be talking about the game’s first unforgivable design mistake.

That’s right, there’s more than one of them.

(Oh, and if anyone out there is looking to surprise me this Christmas, a “No Smoking” logo Zippo lighter would be a great idea. Just FYI)

Next time: The First Unforgivable Design Mistake (Deadly Premonition is the Game of the Year, Part 3.

Just something I felt and loved when I first watched the opening cinematic: The player is Zach. Am not gonna say anything more without going into spoilers, but just watching the opening cinematic, I remember thinking that game is treating the player as character’s imaginary companion. Suddenly, it adds to immersion than breaking it, alongwith being really cool at a meta level.

Just wanted to say that your review is really spot on. Also wanted to say that I have seen a squirel in actual game play, think it was behind Becky’s house. Thanks for a great insight into a game I am thorougly engrossed in, as well as thoroughly frustrated with. I do wonder if the terrible mechanics are designed to drive you slightly nutty to really experience the split personality that is the opposite of the calm calculated York. I’ll be thinking about this game long after i finish it.

Another thing to note about this scene is that York already knows that the case involves the Red Seeds, which in part explains why he, as opposed to an FBI agent with a firmer grasp on sanity, has been sent out here. A later scene makes this look like a plot hole, but given that York’s a profiler by trade I’m not terribly concerned by it. Great note about the scars. I seem to recall that York actively deflects inquiries about his “real” scar in this way a couple of times. Scars have some importance in the game, a subject… Read more »

Well, he does constantly phone in to his superiors to save, and write up reports to show them. Plus, at the beginning of the game, George says both George’s and York’s superiors spoke and cleared everything or something to that effect. I can agree that it would be quite interesting if he was just living off what he inherited though.

LC – Thanks for the note about the convoluted text. I’ve rewritten it so it no longer has as many pointless double and triple negatives. Jonathan – It’s certainly an interesting theory, one that adds a neat twist to the proceedings, there’s no real textual support in the game to back it up. Right in the first meeting with the cops we’re told that FBI higher-ups cleared York’s involvement with the (never-seen) mayor of Greenvale. Also, according to the game’s logic, every time you save you’re ‘reporting to FBI headquarters’, and York types up reports to fax home after every… Read more »

As long as we’re talking specifically about York, I think we should debate his assertion that he works for the FBI. Honestly, I think he believes he works for the FBI, (why not, he’s crazy) but we are only ever given York’s word on the matter. Not once does he phone in with his superiors, even to replace his car when it was totaled. He does things FBI agents don’t do, like walk into abandoned warehouses/lumber mills by himself, without backup, even when it is offered. Frankly, the whole story is just as believable (and frankly, more interesting) if we… Read more »

One more interesting article on one of my favorite games of the year. I agree with you; York’s introduction is stunningly well done, managing to convey entertainment, motivation and important facts about York/Zach and the plot all at once. There’s not much to discuss here, you pretty much said it all. The last paragraphs seem very pessimistic to me, though, and they seem to clash with the overall tone of the article. The character reveals will « not disappoint [you] in a very profound way », followed by « join me in my profound lack of disappointment »? What is… Read more »