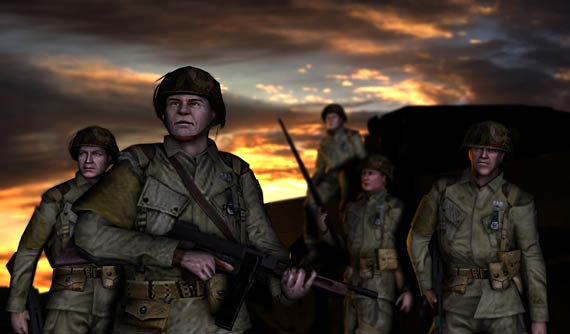 I wonder how different this review would have been if I had played Medal of Honor: Vanguard before trying the demo for Medal of Honor: Airborne. While it's true that almost no game looks good when placed next to its immediate successor, I feel that the things that Vanguard gets wrong are so clearly and fundamentally awful that even if I hadn't played the wonderful Airborne demo I'd still have realized just what an atrocious waste of time Vanguard was.

A World War II first-person shooter, Medal of Honor: Vanguard brings the long-running MoH series to the Wii for the first time—something that, in retrospect, Electronic Arts clearly should not have done. It tells the story of a soldier who runs down blurry streets following clearly defined and restrictive pathways, shooting repetitive enemy soldiers until the game announces the war is over. If I seem overly glib and dismissive it's because I feel like I've played this exact game a few hundred times now, and after trying a game that actually attempts to do something different with the World War II shooter formula, it's a little hard to go back to complete awkwardness and dullness.

Also, if I'm going to be saddled with the most boring gameplay imaginable, the least they can do is make it look good, isn't it? That's right, Vanguard is ugly, and not "Wii ugly," either. Call of Duty 3 was a launch title for the Wii and it looked far and away better than this. I've seen PlayStation 2 titles that look better than this. It's not just an aesthetic thing, either. This isn't the complaint of someone who's just played Bioshock for the first time and doesn't understand why everything can't be that pretty. Vanguard's graphics are so poor that they actually affect gameplay. Whether it's risking screen hypnosis by watching the same floor and wall textures scroll past over and over again uninterrupted, or being unable to suspend my disbelief as I walked through room after unfurnished room with only the mini-maps assurance that I wasn't just headed in a circle, my playing experience was made much more painful by the poor graphics I suffered through. 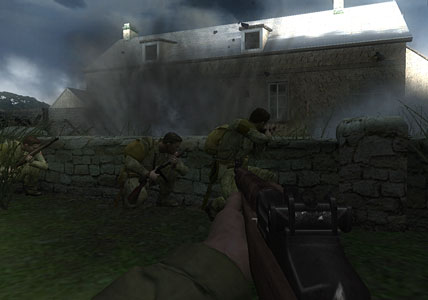 That's not the worst of it, though—there were times when the bad graphics actually got me grievously injured. One time I tried to throw a grenade through a window and it bounced off, landing just under the frame. Leaving aside the issue of why I wasn't able to throw the grenade through the window, while I was forced to run away to avoid being killed, the window wasn't visibly damaged by the blast. Luckily it was grenade-permeable now, and one went cleanly through the wooden inner frame and panes of glass. I'm not sure the problem was the Wii not being able to display a transparency effect to demonstrate the difference between glass and the absence thereof, or simply that the modelers and animators decided not to create a breakable inner frame; either way the end result was a window that didn't break when destroyed. This is every bit as confusing as it is frustrating, two things I have no interest in feeling while I should be busy gunning down Nazis.

Graphics aren't the only dated and embarrassing thing on display here. The gameplay itself leaves an awful lot to be desired. Not the shooting though, let me go on record as saying right now that the shooting here is every bit as comfortable as I've come to expect from the Wii. Once again the way I was able to effortlessly target and shoot whomever I wanted once again establishes the Wii as the premier platform for first-person shooters. A few of the gesture based commands don't work as well as they out to, but there are simple button based alternatives which keep that from being excessively troublesome.

The real problem is the context for the shooting. The level design is painfully linear and the enemy encounters rigidly scripted. At no point does the game get more complex than: walk straight forward until a group of enemies present themselves, shoot those enemies, move on to the next group of enemies. Sure, every now and then a barricade is put up in front of me, a waist high barricade I can't climb over, but getting around it will be a simple matter of running through a series of rooms, each with only one entrance and exit, while a bunch of scripted soldiers ambush me along the way. While it's nice to see that the soldiers have some rudimentary AI which allows them to run from grenades and fall back to secondary positions if I rush them, the fact of the same number of enemies always appear the same places insures that, as interesting as their reactions may be, they will always react in the exact same interesting way every time I arrive at a scripted encounter. 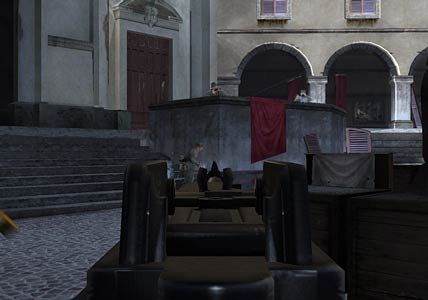 If the enemies are bad for this, though, my own squad mates are so much worse. Rather than being an active part of the battle, they are entirely scripted entities whose behavior has been pre-programmed into the game. They can't get killed unless they're supposed to get killed, they can't kill anyone they aren't supposed to kill, and they can't deviate from their behavior for any reason. That's primarily because they act as the key that unlocks new areas of each level. The game doesn't want players to burn through levels too quickly, so each and every level is broken up into several sections, each one marked off by a flimsy wooden door. Once all of the enemies in an area have been killed, all my squad mates stack up on the door and open it, allowing us to proceed to the next part of the level. Sure, progress control is an important part of pacing a game, but why does it have to be done in such a trite and obvious fashion? Was it absolutely necessary to make it look like my special forces commando is so thick as to be unable to open a door on his own? I haven't even a discussed the innumerable occasions on which I ducked behind cover and then found myself suddenly trapped—unable to move because the cover I had picked was where one of the computer characters was supposed to stand, and I found myself pinned between a soldier and the wall.

It's distressing just how awkward and poorly thought out this game is. Everything about it is just shoddy and by the numbers, like the developers were just shoveling a game out the door as quickly as possible. Even the level balance, something I've never had a problem with in the series before, was a huge issue here. More than once I ran out of ammo, and because the game doesn't provide me with a sidearm, or let me backtrack to find ammo, I was forced to rush forward and smash Nazis to death with the butt of my rifle. One would think that I could just ask my squad mates for ammunition but unfortunately, as I mentioned above, they're not real characters in the game so that just wasn't an option. Even the game's one original bright spot, the presence of upgradable weapons (which had impressed me so much in the Airborne demo) was a huge letdown. There were only upgrades available for two weapons, and instead of being rewards for excellent playing they were simple hidden power ups that lasted only a single level.

So Medal of Honor: Vanguard is just a waste of time and money. A tedious plodding waste suitable only for those absolutely desperate for another first-person shooter to play on their Wii. There is an upside though, and a pretty good one at that. By the time this review is published Medal of Honor: Airborne will be available in stores, so there's no reason anyone would ever have to play Vanguard. Ever. Rating: 3 out of 10

i thought it was a preety good game i do not know what your problem is with it???