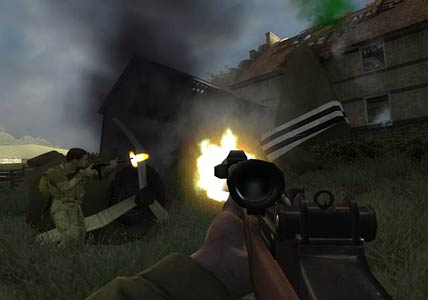 Parents are in the relative clear buying this for their teens. Unless you're as uncomfortable about near-bloodless depictions of war as I am, in which case it would be wise to steer them away. There's a little bit of swearing as well, but nothing more than they'd hear after someone hit their thumb with a hammer.

WWII Shooter fans: please, just go elsewhere for your gaming. Wherever you go, it's got to be better than this.

Deaf and Hard of Hearing gamers will be in the normal shooter bind. Without the ability to hear gunshots you'll have trouble figuring out when you're under attack, but regenerating health ensures that shouldn't cause too much trouble. Mission objectives are printed clearly, though, so just where you have to go next to be shot at is always apparent. And a handy on-screen radar will help you ferret out the enemies.