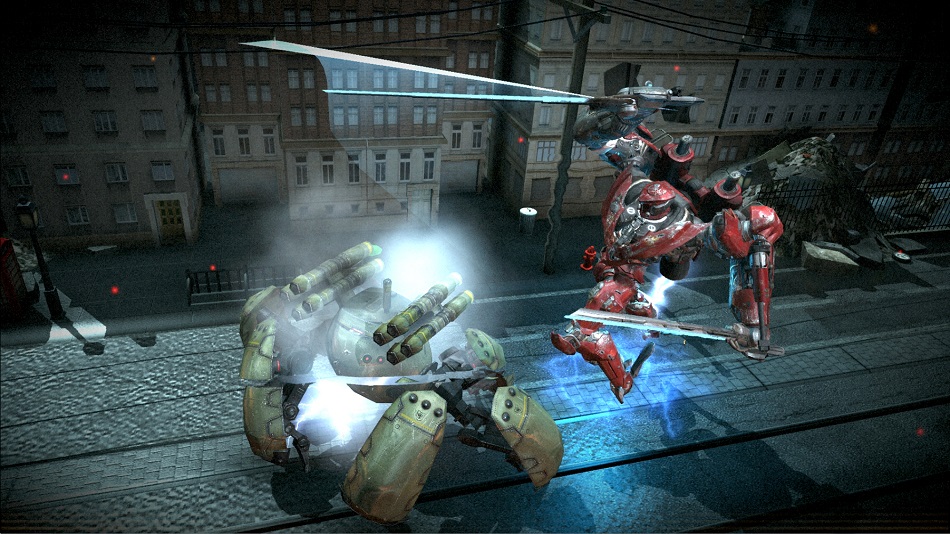 HIGH Unloading so much ordinance that the boss blows apart before the intro movie finishes.

LOW Being trapped in a dead end, over and over again.

WTF So bosses get free hits? That seems fair.

Infinite runners are surprisingly tricky to get right. How much freedom of movement should the player have? How much warning should a player get when an obstacle appears onscreen? Obviously procedural generation is a must, but tuning the RNG to make sure the game isn’t too tough is tricky. Mechrunner is a perfect example of how an impressive concept can get bogged down by tiny mistakes, making what should have been a thrilling diversion into a questionable mess.

Set in an alternate-universe Soviet Union, a spaceship crashes and the salvaged tech allows scientists to craft futuristic tanks and transforming robots. Players take on the role of a young woman piloting the titular mech as she races through the crumbling streets of a war-torn city, battling enemy robots and rescuing civilians. Ideally it’s to overthrow the fascist dictator running the place, but since the game’s an ‘endless’ runner, that may never actually happen.

Mechrunner gets into trouble right away by offering free movement rather than focusing on lanes, as so many other infinite runners do. The idea is to let the player dodge left and right as much as they like so that the combat sequences – in which the player’s tank stops to fight an enemy drone  – feel more involved. It’s a good concept for the combat, and being able to slide laterally while aiming makes the combat minigame feel as involved as anything in an infinite runner can.

Unfortunately, this free movement is woefully unplayable while running, and this makes up most of the game. While the player can move wherever they like, there are fundamentally three ‘lanes’ in which obstacles can appear. Given that the setting is a war-torn city, those obstacles are generally piles of rubble with amazingly unclear hitboxes, making them difficult to dodge. If the player can press themselves all the way against the left or right wall, then then they can reliably avoid hits in the middle of the road. If they’re required to move through a gap between two fallen buildings, however (and this happens all the time) there’s no way to ensure that they won’t take a hit. 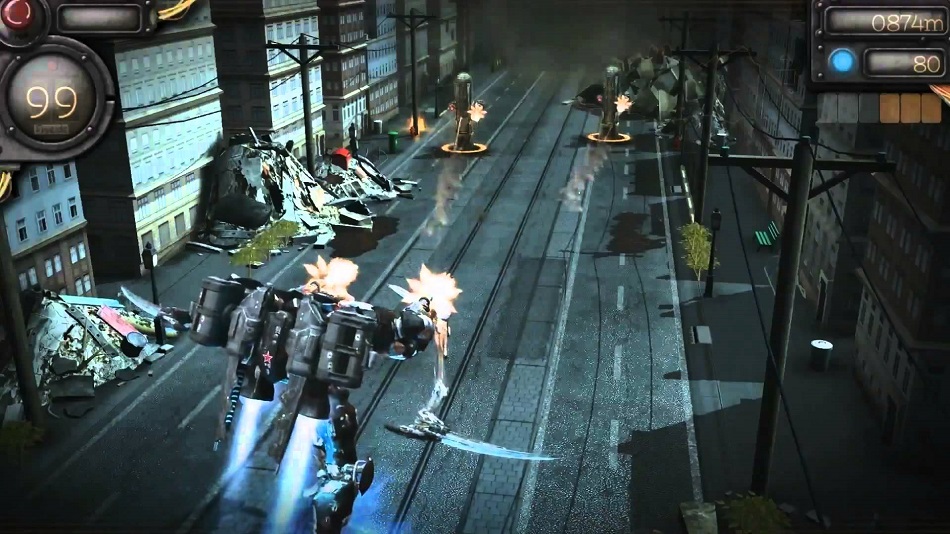 This is such bad design that I can’t imagine how the developers didn’t catch it in testing. The combat and running are separate gameplay aspects, so why not just have lane-based movement for running and free movement for the combat? It would increase the playability a hundredfold without taking anything away.

The boss fight against a train loaded with heavy ordinance is equally misconceived. It’s got a strong premise with the train weaving back and forth between lanes, firing heavy weapons backwards. The player has to dodge and return fire. The problem is that the track has constant twists and turns which are impossible to predict, and the train’s main cannon fires in a straight line backwards at whatever angle it’s pointing.

On a straightaway, the player has to watch for a muzzle flash and avoid being directly behind the train when it fires. On a series of curves, survival becomes entirely luck-based because the train’s firing trajectory is impossible to predict. Skill is removed from the equation, and players can expect to take hits until the track straightens out again. Adding insult to injury, once every part of the train but the final section has been destroyed, a real-time cutscene plays of its ultimate weapon deploying. During that cutscene the weapon fires, automatically getting a free hit since the player can’t dodge when they’re not onscreen. It’s a complete mess.

Worst of all, the game doesn’t offer any meaningful feedback to let players know how successful they are, and the process of  earning experience is bafflingly unclear. At the end of each run, players are told how far they got, how many enemies they killed, and how many civilians they saved, but they’re not told what those items are worth in terms of experience. There’s simply no way to know the most efficient way to play the game in order to advance. Decisions have to constantly be made each run – should players try to pick up a person and miss a health pack that could extent the run another thousand meters? Should they grab the pack and skip the rescue? Since the game won’t reveal what competing objectives are worth at the end of a run, how are they supposed to decide? The game is obviously tallying this information, and by giving it to the player they could make them feel more engaged in the proceedings, but they don’t, for no reason I can fathom.

Mechrunner has a unique setting for an infinite runner and the combat usually works great, but there are just too many design mistakes to overlook. For an infinite runner to be successful, it has to feel like a game of pure skill. Players have to be able to see the threats coming, and be able to react with precise controls. Mechrunner just can’t offer that kind of experience, and it fails as a result. Rating: 4 out of 10

Disclosures: This game is developed and published by Spark Plug Games LLC. It is currently available on PC and PS4. This copy of the game was obtained via publisher and reviewed on the PS4. Approximately 6 hours of play were devoted to the single-player mode, and the game was not completed. There are no multiplayer modes.

Parents: According to the ESRB, this game is rated E10 and contains fantasy violence. This should be largely fine for younger kids, content-wise. The only enemies the player fights are apparently unmanned vehicles, and failure just results in a damaged mech, rather than a bloody death.

Deaf & Hard of Hearing Gamers: There are no audio cues of note. it’s fully accessible.