Is There Really a Curse? 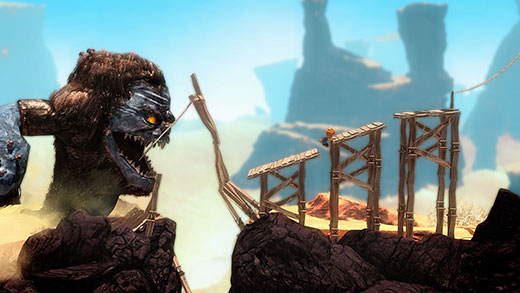 HIGH Rocketing through the air over a chasm before miraculously drawing a vine to save myself from certain death.

LOW The hiding places of some collectibles are flat-out unfair.

WTF I hated that monster until I was killing him – where are these tears coming from?

In the early days of the Xbox 360, Microsoft had an ‘all-ages’ problem. While its advertising posited the system as offering play as simple and pure as skipping rope on a sunny day, its actual offerings were decidedly more mature. Were children supposed to enjoy the game about shooting people, or the one about beating hobos to death with improvised clubs? For a long while the only vaguely child-appropriate titles were the dull farming sim Viva Pinata, and Kameo, a game too needlessly convoluted and boring. It seemed the Xbox One was going to repeat the past with a launch lineup full of zombies, assault rifles, and gorgeously-rendered severed limbs. Then along came Max: The Curse of Brotherhood, offering an imaginative, high-energy platformer intended for and playable by all audiences.

The adventure is kicked off by the main character banishing his annoying little brother into another dimension via a spell he found on the internet. Immediately regretting his decision, Max follows his sibling to a bizarre and dangerous dimension ruled by the nefarious wizard Mustacho, who must be defeated to bring peace to the land. This ouster is largely accomplished by well-tuned platforming, some light physics, and environmental puzzling.

Serving as an excellent launch-window tech showpiece, The Curse of Brotherhood's world is gorgeously realized. The game takes the standard platformer locations (jungle, desert, lava caves) and fills out the backgrounds to the point that a true illusion of depth is created, giving an unexpected amount of weight to the strictly 2D gameplay. This is especially true when dealing with one of the monsters, a giant who bedevils the player for much of their adventure. While Max nimbly runs, jumps and slides around obstacles in the foreground, the giant lumbers along in the background, always a looming threat.

Max's central gameplay conceit is a magic marker empowered to create objects within the world. With a button held down, the marker flies out of Max's pocket and hovers over the game screen, allowing the player to interact with specific areas. At first Max can only create columns of earth to lift himself into the air, but over the course of the game the player will learn to control branches, vines, waterspouts, and even fireballs as they unlock the marker's potential.

Actually using the marker is a little awkward at first – thumbsticks are never going to be anyone's first choice for drawing lines onscreen, and I frequently found myself wondering if The Curse of Brotherhood wouldn't be better-suited to the Wii U's touchscreen gamepad. Still, the navigational puzzles are generally not so threatening or time-sensitive that the controls being a little awkward will cause problems. In particularly thrilling chase and escape scenes, the game even drops into slo-motion to afford the player ample time to generate a life-saving vine or waterspout for Max to ride to safety.

With its charming art style, accessible gameplay, and just-on-the-right-side-of-frustrating puzzles, Max: The Curse of Brotherhood is the perfect game for younger players hoping to try out the Xbox One. The design is solid enough that any lover of the genre will have a good time playing it, and Max is a youthful protagonist who won't quickly grate on older players, which makes this the rare all-ages game that can actually be enjoyed by anyone who thinks they might like it. There's even a cherry on top: at no point did Max: The Curse of Brotherhood attempt to badger me into using the Kinect or talking to the game.

…I'm still not entirely sure what the actual curse of brotherhood is, though. Rating: 8 out of 10


Disclosures: This game was obtained via publisher and reviewed on the Xbox ONE. Approximately 8 hours of play were devoted to single-player modes (the game was completed).

Parents: According to the ESRB, this game contains fantasy violence, mild language. I personally couldn't find any of the mild language the ESRB warns of. And as for the violence, it's pretty far into the mild side of things. Some monsters get burned, and there a a couple of mildly scary main character deaths in which Max can be eaten by monsters, but it's all presented without teeth, so to speak. At its core, this isn't a scary game, and I could easily see players a little younger than 10 being able to handle it without too much trouble. A special warning to Fundamentalist Christian parents, however – the plot is kicked off when Max downloads a spell from the internet. That might move this one into dangerous territory for you.

Deaf & Hard of Hearing: You will be fine. There aren't any audio cues that don't have matching visual elements. The game is completely accessible, and subtitled, to boot!