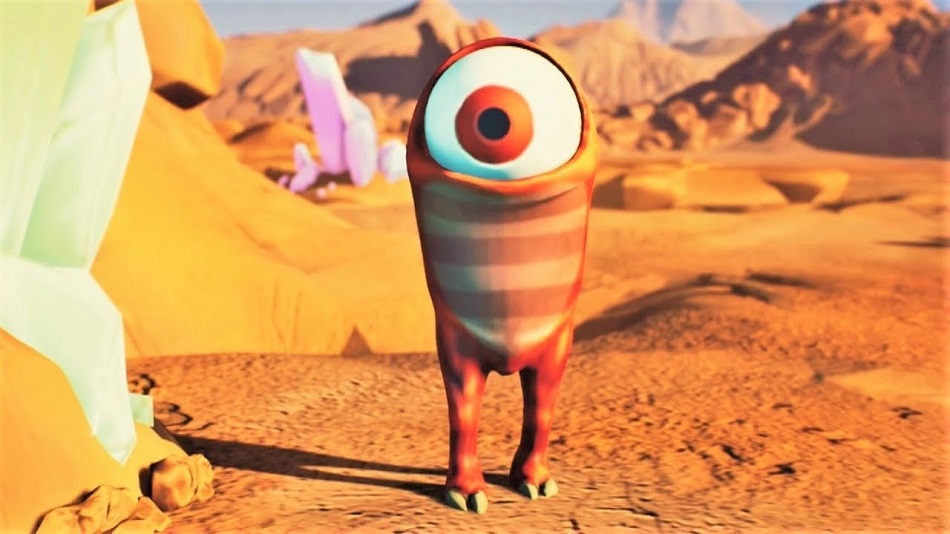 HIGH Getting a perfect fire grid going and wiping out a wave of eyeballs in seconds.

LOW Why are upgrades so inconvenient?

WTF So I guess the final mission can just be played indefinitely?

At its best, Mars Or Die! taps into the terror of exploring the unknown. Stranded on a distant world, armed with sub-par technology and given no support from home, the main characters find themselves struggling for every second of survival against a hostile environment and vicious aliens. The only thing keeping this from sliding into horror? Just how adorable everything is.

A sci-fi tower defense/survival game, Mars Or Die! imagines a world where a heavily-stereotyped USSR sent cosmonauts to Mars with disastrous results. And no, I didn’t accidentally play Lifeless Planet again, this is a completely different game that’s equal parts casual and sadistic.

The player controls two spacemen who are assigned a series of missions after arriving on Mars. Once they’ve met up in training, the player can switch between the Scout and Soldier at will — the former is able to quickly dart around the map, and the latter is capable of blasting foes with his ray gun. These end up being equally useful skills as the spacemen find themselves beset by giant walking eyeballs who are eager to defend their homeworld at any cost.

Gameplay centers around RTS-style resource mining and simplified base-building. Auto-miners collect resources, cannons can be erected for defense, oxygen stations keep the cosmonauts breathing, and solar panels power it all. I never had a problem sliding buildings around the map and building the exact layouts I wanted – a little bit of planning is required, however, since structures can’t be moved after construction is complete, only destroyed for a 50% refund. 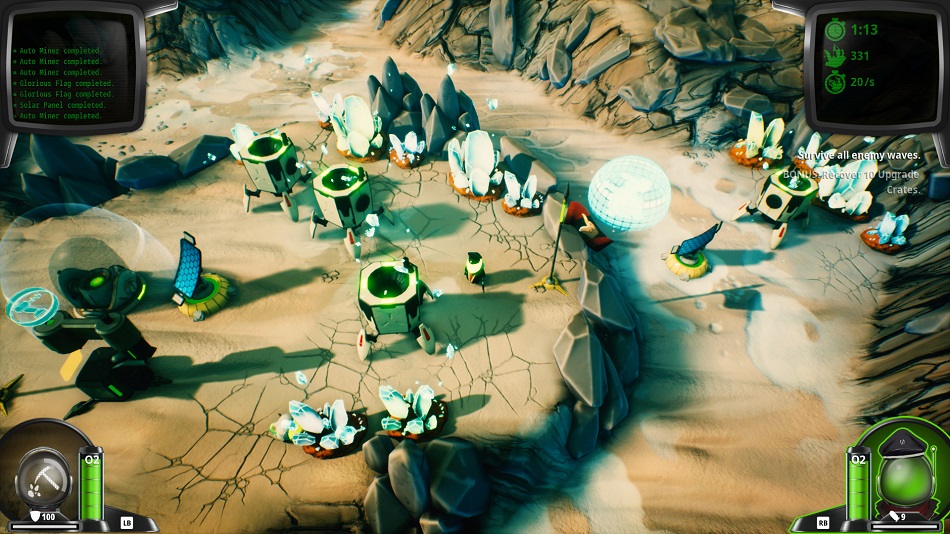 There are just two types of missions in Mars or Die – build a base and survive for a certain amount of enemy waves, or get to a certain location. Even with the game containing just eight non-tutorial missions that’s not a huge variety, and the experience suffers from a lack of depth. Once I’d learned about all of the structures in the first hour, the next four were spent on rehashes of the same missions, with only the increasing number of enemies ever making a notable difference.

The core gameplay works fine – there’s a certain thrill to racing across expansive maps while desperately searching for resources to set up a temporary basecamp before the monsters arrive, and a decent amount of strategy is required to pull off some of the later base defenses. Unfortunately, the game misses out on one of the strongest aspects of the Tower Defense genre – replayability.

There’s nothing to unlock in Mars or Die, and no reason to go back to earlier missions. Instead of incentivizing replay via newly-earned equipment and upgraded towers, all of the tower and character upgrades are reset after each mission — no matter what’s been previously earned, the player has to start from scratch each time.

That’s not the only frustrating element, however – the biggest problem is a lack of variety in enemies. The general design of giant eyeballs surrounded by teeth at the end of a stalk is pure nightmare fuel, which makes it pleasurable to watch them get wiped out by banks of autocannons. These martians are the game’s only enemy, though. There’s a total of four types – small and large melee fighters, small and large ranged fighters – and they all look incredibly similar, not even offering color changes to keep things interesting as the levels march on.

Mars or Die‘s design is beautiful and the RTS and Tower Defense elements work fine, but there’s just not enough here to recommend it. Once I’d finished the tutorial, and all that was left was to get through slightly harder versions of the same fights until credits rolled. It has some good bones for a better game to be built on, but in its current form, this title feels empty and incomplete. Rating: 5.5 out of 10

Disclosures: This game is developed and published by 34BigThings srl. It is currently available on PC. This copy of the game was obtained via publisher and reviewed on the PC. Approximately 6 hours of play were devoted to the single-player mode, and the game was completed. There are no multiplayer modes.

Parents: The game was not reviewed by the ESRB, but it’s roughly a light T due to some fantasy violence, and that’s about it. The monsters are scary in an adorable way and it’s satisfying to see them killed, but all of the combat is bloodless. Even the character deaths (which only happen when they run out of air) are sanitized to the point of being harmless. The only reason I’m not knocking the hypothetical rating down to an E10+ is that the story gets slightly dark right at the end.

Deaf & Hard of Hearing Gamers: I played most of the game with the sound off, and encountered just one issue – when a character is getting low on oxygen, an alarm sounds. This is accompanied by changes in their helmet color, though, so as long as players pay attention to how the characters look, you won’t have much trouble. 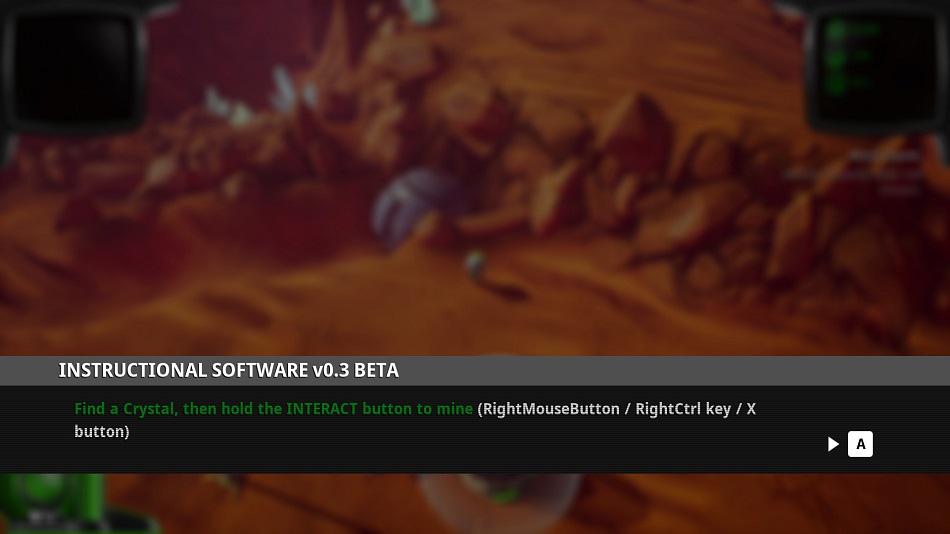 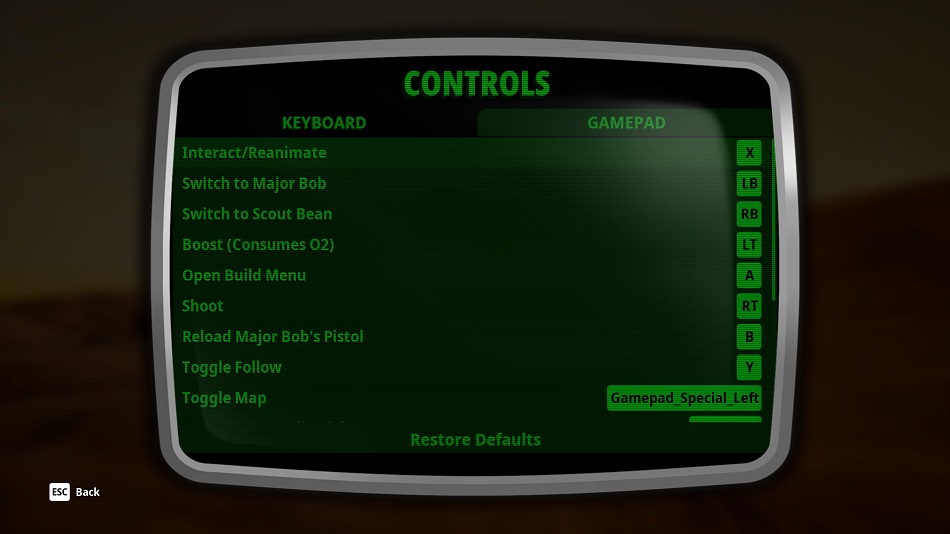 It’s weird to see someone say the monsters in a game are nightmarish and gross and that this makes them more enjoyable to kill….it never crossed my mind there were people who don’t just adore monsters and would rather play as them. Giant eyeballs are almost inherently charming, too. I’d love a game where you get to be the martian natives fending off the evil human invaders because, let’s face it, these are evil human invaders. No other way to interpret it.