Curse of the Far-Too-Mysterious Object 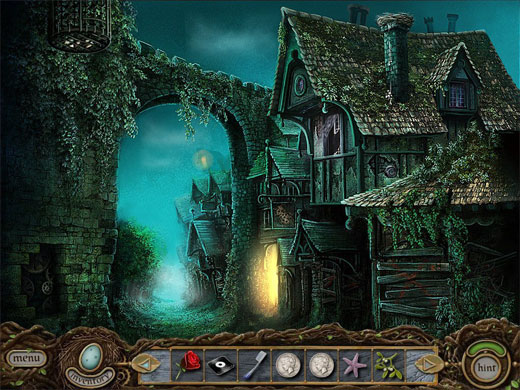 HIGH The opening song made me think of Deadly Premonition.

LOW The lack of a map really slows things down.

WTF "Now you have the strength of a dozen mechanical birds!"

Margrave: Curse of the Severed Heart

is a hidden object game wastes no time in getting to the action.

The 'adventure' opens with main character Edwina driving to the town where her mother and father died years earlier, killed mysteriously while searching for the titular object. She isn't in the anachronistically-medieval town for more than a minute before she's using spirit cards to divine the names of ghost animals and unlock arcane seals in order to keep a mysterious black beast at bay. Right off the bat players are invited to share in the bizarre magical world of the game—it feels like being dropped in the deep end, but as the game progresses, it just winds up seeming like the developers have decided to err on the side of respecting their audience's intelligence.

Margrave's classic art style suits it well. The screens are all beautifully rendered, with just enough animation to make the various locations feel alive. Unfortunately, the high quality of the environmental art makes the bizarre choice of rendering all of the story scenes by lightly drawing over actual photographs seem incredibly odd. Going from a classically beautiful depiction of a crumbling city wall to a photo with a crude filter over it is a jarring experience that does the game no favors.

Really bad this time. While the hidden object scenes are extremely well-drawn, there's absolutely no coherent theme to them. An effort is clearly being made—an orchard has rusty tools, a dollhouse has creepy figures of broken porcelain, and so on, but in every screen I'm asked to look for completely random items whose presence makes no sense at all. What's worse, the various items that need to be found are vastly shifted in size to better hide them, which just seems lazy. There are pins the size of walking sticks, paperclips the size of suitcases, and bowler hats that fit over a single key on a cash register. More often than not, I was finding items by picking them out of the list, guessing what color they'd be, and then trying to find a spot on the screen where the artist had camouflaged them to the point of unfairness.

This is borderline. As usual, there's generally one 'vital' item that needs to be found to continue the story, as well as fifteen that don't matter, but it's not a huge issue here. The game seems far more interested in its puzzles than the hidden object screens that define its genre.

The developers have done a great job of creating a coherent world where HOG screens are just one component of the various mysteries they're asked to solve. There are a wide variety of puzzles, including pipe turning, assembling torn letters, and a recurring puzzle where the player has to use their spirit cards to determine the secret names of various characters and items. While the HOG screens are somewhat disappointing, the high quality and comparative fairness of the other puzzles go a long way towards making up for the shortcoming.

The game is a little on the short side, with just a handful of HOG screens—most of which the player will have to visit more than once—and an equal number of puzzles. Despite the relatively small size of the game, it still has a problem with making it clear exactly what players are supposed to do next at any given moment. While other games have offered interactive maps letting players know when a new HOG screen has appeared somewhere, Margrave expects players to simply click the 'hint' key whenever they're not sure what to do next. While both offer the same relative level of difficulty, forcing players to ask for help (or backtrack through every single screen multiple times) rather than simply giving them a map seems like a bad decision.

While the game does a good job of wrapping up its main plotline, like House of 1000 Doors before it, Margrave is puzzlingly obtuse when it comes to many of its plot points, such as explaining what exactly the Severed Heart is, and why it's cursed. Many of these questions are then answered in one of the most baffling bonus games I've ever come across.

The "Blacksmith's Revenge" which unlocks after completing the main game, is set two years in the future, when Edwina has returned to tie up loose ends. Then, things get bizarre when the game explains that the cursed object in question was created by a Native American cyclops to get revenge on the puritans that persecuted his family. Also, Edwina now has a mechanical bird sidekick. The jarring time-jump and sudden inclusion of magical races, along with a few well-drawn but non-interactive locations that appear in a montage as the story begins make this epilogue feel like the last 10% of a sequel, dropped in here as a special feature when the project was abandoned.

Despite its disappointing HOG screens, Margrave

manages to offer a satisfying (if brief) adventure, followed by a tiny, utterly baffling one. With its impressive art and effectively creepy atmosphere, it's certainly an adventure worth playing. It's too bad that it's only a few improved HOG screens and a more coherent story away from being a stellar example of the genre, though. Rating: 7 out of 10


Disclosures: This game was obtained via download and reviewed on the PC. Approximately 4 hours of play was devoted to single-player modes, and the game was completed.

Parents: According to the ESRB, this game contains mild violence. There's a little bit of blood in the game, quite a few skeletons, as well as verbal descriptions of brutal crimes in the past. There's no harsh language, or any subject matter that you might find objectionable, even for younger teens.

Deaf & Hard of Hearing: There are no audio cues involved in any of the puzzles, and all dialogue is subtitled.

Thank you for this review. Games like these aren’t being reviewed enough by “serious” critics.
Are you gonna do more reviews like this?

Of course I will! I can’t very well call myself the world’s foremost expert on HOGs (which I do. A lot.) if I didn’t continue reviewing them!