No Sympathy for this Devil 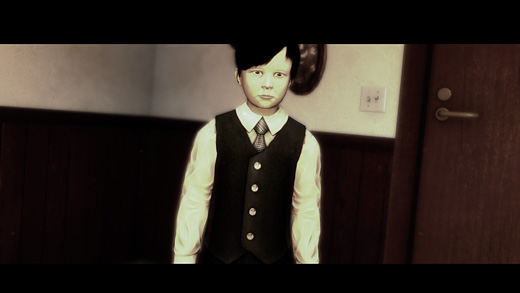 HIGH Finally figuring out how to get that woman to climb into the bath so I can electrocute her!

LOW Why is Satan's son involved in a boss fight?

does. There's no hesitation, no complex explanations, no hedging of moral bets, or offering a suggestion that the game's victims kind of had it coming. In the game's opening minutes, the player is asked to lock a maid inside a walk-in freezer overnight, for no other reason than because the devil tells them to do it.

Lucius is a singularly bleak and nasty experience, its only "redeeming" characteristic being the utter straightforwardness with which it treats its darker subject matter. Not only does the game refuse to shy away from depicting the horrifically violent, it lavishes attention on the atrocities, showing them in slo-motion from dramatic camera angles.

A third-person adventure game based loosely on the film The Omen, Lucius lets players control the titular character. This nefarious six-year-old spawn of Satan murders everyone foolish enough to come onto the grounds of the family estate. While the game makes feints in the direction of being an open-world adventure by letting the player have access to the entire mansion (an expansive and well-designed map) fairly early on, it's actually a classic graphic adventure, with all the item-hoarding and pixel-hunting that implies.

The game is broken up into nearly 20 chapters, each one themed around Lucius killing someone in his house without drawing attention to himself. To accomplish these violent ends Lucius has access to a variety of powers, including telekinesis, mind control, and spontaneous combustion. The game manages to find a wide variety of clever and gruesomely creative ways to employ these powers, but it's important to note that all the cleverness is on the part of the developers—there is no experimentation allowed, and each kill must be performed in a specific pre-scripted fashion, using exactly the tools intended.

At times, this can make the game feel like it's on rails as the player moves mechanically from one kill to the next with only the barest context offered by cut-scenes. There is one nice thing about the pre-level bits though—they outline in broad strokes how Lucius should proceed in bringing the next horrible end to pass. The clues are rarely necessary, though, since the game is resolutely simple and realistic in its puzzle design. 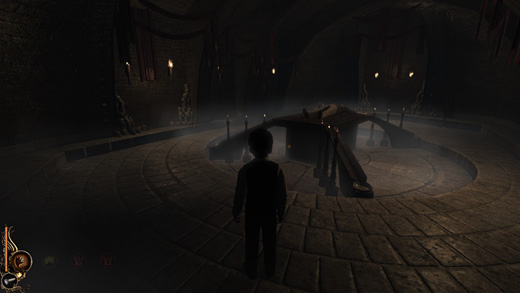 Lucius sees someone eating a sandwich, and his satanic vision (which makes an appearance the first time he encounters a chapter's victim) shows the word "Gluttony" written on the wall in blood. It's not too hard to extrapolate that it would be a good idea to track down some poison and spike her next meal. Likewise, the game's placement of necessary items is so logical that I was actually puzzled by its simplicity at times, as other graphic adventures have trained me to wrack my brain looking for complex solutions to straightforward problems. It's strange that Lucius's realism would make it stand out as unusual among its peers, but something seems suspicious about finding a replacement fuse for the fusebox just sitting on a shelf next to said fusebox. Well, sure, if it was my house, that's where I'd have kept it, but this is a video game. Aren't things usually more complicated?

While the brutal murdering goes smoothly enough—in fact, most of the levels can be zipped through in just a couple of minutes if the player knows what to do—there are other aspects of the game that are downright rough.

Two key stealth sections are far more difficult than they ought to be because the game never clearly expresses what its rules of stealth are. Lucius is running around a dark house with the lights off, but merely hiding in the shadows or behind furniture isn't sufficient to keep people from spotting him and ending the game. Sometimes it seems like Lucius has to be in a different room to remain safe, while at others he's good so long as he's out of the path of his quarry's flashlight.

Even worse are the game's ill-conceived boss fights. There aren't many, but at certain points in the game Lucius is exposed, and has to kill a foe not through guile and trap-laying, but by throwing fireballs at them. The controls are a little wonky to start with, and in these sequences they completely fall apart. The physics and animation of the people being struck by fireballs are also a laugh-out-loud embarrassment. These "boss fights" are so awful and run so counter to what the game is about that if there were any more of them, they'd have spiked the entire experience for me.

On one level I'd like to indict Lucius for reveling in the brutality and salaciousness of its subject matter, but the game is so straightforward about what it wants to accomplish that it's hard to fault it for getting the job done. This is a horror movie told from the killer's point of view; a short graphical adventure with some of the grimmest and bleakest subject matter possible.

While the question of whether it's a good idea to put players in the role of a dead-eyed mute psychopath is open for debate, it's undeniable that Lucius

's developers have captured the feel of their inspiration perfectly. There are missteps that keep the game from truly excelling, and the story is serviceable at best, but Lucius provides a unique horror gameplay experience, and any hardcore fans of the genre owe it to themselves to give it a look, provided they have strong stomachs. Rating: 6.5 out of 10.


Disclosures: This game was obtained via publisher and reviewed on the PC. Approximately 12 hours of play was devoted to single-player modes (completed 2 times). There are no multiplayer modes.

Parents: The game isn't rated by the ESRB, but it is somewhere between M and AO-level. It contains blood and gore, intense violence, nudity, sexual themes, alcohol and tabacco use. Are you kidding? It's a game about a child murdering people, and you play as the child. Don't let kids near it. As if the killing, drinking, and smoking weren't bad enough, this is a 70s-style horror story, meaning there's ample nudity on display in addition to all the brutal gore. One level asks players to murder a nude woman taking a bath—and there are no conveniently-placed bubbles. Don't let kids anywhere near this game. Please.

Deaf & Hard of Hearing: You shouldn't have any trouble outside of the game's stealth sequences. The rest of the game is subtitled and easily playable without sound, but listening for footsteps and opening doors are literally the only ways of succeeding whenever Lucius has to hide in the dark. Good luck learning the timing through trial and error, because there's no other way to get through these sequences.

I’m willing to go on record as saying that the finale ruined the game for me. The fight against those two priests, and the single, forced way to win the game, combined with bad checkpointing, made for an absurdly awful and ludically disconnected ending. Your reward for suffering through this uniquely crappy coda is… zilch. There’s no narrative resolution at all, just a long still shot of the dead-eyed kid you’ve been playing for hours standing silently in the rain. It’s tremendously ill-conceived, and puts an even more negative spin on the excessively brittle adventure that came before. Also, the… Read more »