Love As A Weapon 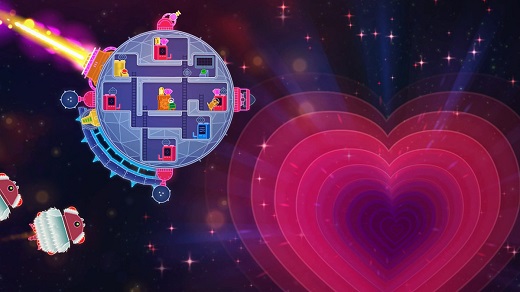 LOW The timed level. Five minutes is not enough time.

Set in the most adorable future imaginable, Lovers in a Dangerous Spacetime (hereafter written as LDS) sets out to accomplish something bold—it wants to be the ultimate video game for couples.

Frankly, I'm always a little skeptical when a game is presented as being primarily co-op. No matter how proud the devs are of ‘helper' AI that makes their work playable to lone wolves, it's always clear that they're hitching their wagon to the idea that two people can sit down for hours on end and work in perfect synchronicity.

That's a big ask, especially considering that most couch-multiplayer games start with the assumption that players are going to be competitive and then lean hard into that idea. Not so here. LDS goes in the opposite direction and demands that competition be set aside by recruiting players to be the two-person crew of an eight-person spacecraft. In this adventure, it's cooperate… or be destroyed.

As LDS begins, it seems that cuddly bunny and frog scientists have created a reactor which runs on the infinite power of love, bringing peace and prosperity to the universe. Then (of course!) something goes horribly wrong and the forces of Anti-Love rear their ugly heads. The LOVERs (an acronym I won't spoil here) are pressed into action. They must save creation by defeating stellar beasts and rescuing super-cute space animals from their captors. This involves piloting a ship through four different campaigns, and across a surprisingly wide variety of locations for a game set in space.

As stated above, cooperation is the key element in LDS. The screen centers on a spaceship with eight workstations. There are four cannons in the cardinal directions, a rotating shield, the helm, a map, and the Yamato Cannon, which is an incredible superweapon. At any given time, only two of these stations can be occupied, forcing both players to multitask if they want to get anything done. While one player weaves the ship through an asteroid field, the second must spin the shield to dampen any impacts or hop onto a cannon to deter pursuers. During intense battles, enemies can come from any direction, so at times like that, two gunners are absolutely required. Boss fights are masterpieces of co-operative gameplay, forcing combinations of shields, engines, and cannons to work at maximum efficiency.

While there may be plenty of co-op games out there, LDS sets itself apart with the specific roles that each of the players serve. This isn't a simple case of having an extra helper along make a fight easier—by compartmentalizing all of the ship's functions and making each one essential, there's never the sense that a strong player is covering for a weak one, or that one player is merely supplemental to the other. Yes, piloting is the single most important function and requires a bit of skill, but no matter how deftly the ship pirouettes around obstacles, if the shield or cannons aren't doing their best, the mission won't be a long one.

Speaking of the ship's hardware, there are three different types of ship to use, each one requiring a completely different playstyle. Seven ship systems can also be powered up with three varieties of crystal, leading to dozens of different combinations to experiment with. These aren't minor tweaks, either—each kind of shield, engine, and cannon vastly changes how the game is played.

For example, a 'metal' engine lays mines in its wake, while a 'beam' shield reflects, turning the shield into an weapon. There's an equally wide array of enemies to face, from tiny flame-throwing gnats to gigantic beetles that spit meteors at the players' ship. To cap it all off, everything except for boss levels are procedurally generated, so teams can try out different ships and power combinations over and over, never having the same experience twice.

While the concept and content are golden, what makes LDS a legitimate contender for being the best couple game of all time is how simple the controls are—manning the cannons or shield is as easy as getting to the correct station and using the thumbstick to aim. Anyone can get the hang of it in under five minutes, so even partners who aren't generally into video games will be able to learn it quickly and do a good job.

With approachable, simplified controls and a forgiving Casual difficulty option, the most important thing to master in LDS is the communication between partners—the difference between success and failure comes down to being able to assess situations and rapidly divvy up tasks in response. Sometimes it feels as much a relationship-building tool as it does a space adventure. Rating: 9.5


Disclosures: This game was obtained via publisher and reviewed on the XB1. Approximately 1 hour of play was devoted to single-player modes and 6 hours of play in multiplayer modes. The game was completed.

Parents: The game was not rated by the ESRB, but it contains: mild fantasy violence. Let your children all over this. It's cute animals using a spaceship to rescue other cute animals from space insects. There is absolutely nothing objectionable here, unless you hate bunnies and rainbows.

Deaf & Hard of Hearing: You're going to be fine. All information is given visually, and there are nearly no important audio cues. Every now and then there's a foe who'll make a specific sound before attacking from offscreen, but by and large this won't be an issue.