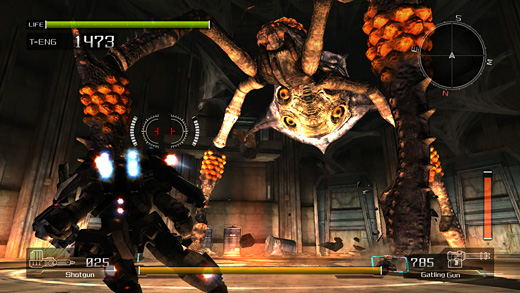 A third-person shooter set in Earth's distant future, Lost Planet tells the story of Wayne, a cyborg who awakes from cryogenic slumber to find the planet overrun by giant insectoid creatures and bloodthirsty corporate goons. Since it's a videogame, he immediately concerns himself primarily with killing both groups of opponents either on foot or by piloting a VS, one of the game's suits of giant powered battle armor.

As the description suggests, there's literally nothing to the game but continuous violence, and it's all the better for it. There's a story, but it's of little to no consequence, and a little confusing in its sparseness. For example, both the game's heroes and villains seem to have the same motivation—to return earth to a thawed state, and their conflict with each other seems oddly contrived. Also unexplained is the presence of a wide variety of giant insectoid monsters called Akrid. They're fun as heck to fight, and do the best job yet of offering gamers a playable version of Starship Troopers, but the lack of any explanation of their origins seemed like something of an oversight. Who knows, maybe they're saving it for the sequel.

The action in Lost Planet is so incredibly fast and intense that it couldn't help but remind me of classic arcade shooters. The game's persecution of me was so viciously efficient that it almost seemed like it was trying to wring more quarters from my pockets. How does it accomplish this? That old, frequently overlooked device of game design, the time limit. Instead of simply having a refillable health bar, everything in the game revolves around the player maintaining a certain level of thermal energy. Just standing in the freezing cold lowers this energy constantly, piloting a VS lowers it more quickly, and being damaged drains it fastest of all. New thermal energy is acquired by killing enemies or destroying a variety of containers. This mechanic ensures constant forward progression through the game—there's no time to stand around enjoying the scenery, beautiful though it may be. If Wayne doesn't constantly find something new to kill, he'll wind up frozen solid. 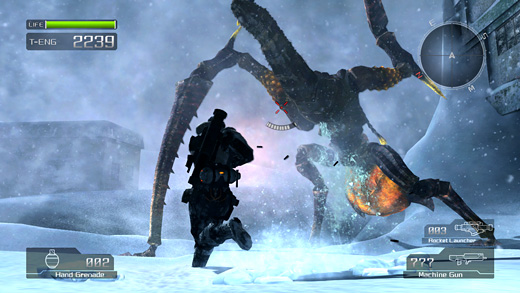 Luckily, that killing manages to remain fresh and interesting nearly the entire length of the game. That's because of two key elements. The first is how smooth the controls and animations are. Eschewing the modern trend towards physics governing everything, enemy deaths in Lost Planet are entirely scripted, and all the better for it. Akrid writhe and bleed heat before turning to ice, humans pitch backwards when shot, power armour shudders and sparks before finally exploding in a huge plume of flame and smoke… every single enemy killed offers a fantastic, viscerally satisfying experience, and even though they might be the same animations over and over again, the action moves so quickly that players will almost never get a good look at just how their opponents are dying, but they'll be constantly aware that something interesting is happening at the periphery of their vision, and it improves the experience immeasurably.

The second element is the difficulty level I mentioned earlier. Lost Planet walks the most precarious tightrope imaginable: it finds a way to keep the action feeling just on the good side of overwhelming at all times. Part of the secret is the weapon switching system, where players can only hold two guns and a single type of grenade at any given time, and ammunition is in very short supply. More important, though, is just how numerous and impressive all of the enemies are. The Akrid are either small and swarming in huge numbers or monstrous in size and strength, while the humans are excellent shots, use every weapon the player has, and have access to the same variety of power armour.

Wayne is knocked onto his back constantly over the course of the game, whether by the explosion of a missile or the swipe of a creature's arm, and it's thrilling to watch him climb back to his feet each and every time, so long as he has the thermal energy to keep patching up his wounds. This high difficulty level just makes it all the more satisfying when the opponents finally die—watching a fifty-foot tall mantis turn to ice, or seeing a giant robot burst into its component parts is all the more thrilling because every time it happens it feels like an accomplishment, as if the creature almost managed to kill Wayne, and he just barely prevailed.

That kind of feeling is rare to see; most video games can't create it more than one or twice. It's to Lost Planet's credit that the skillful handling of the difficulty and level design puts the player in a state of desperation for almost the entire length of the game. Lost Planet doesn't break any new ground, but it's a landmark title all the same. It's proof positive that fantastic execution can elevate a pedestrian premise, and the kind of action experience that no one should miss out on. Rating: 8.5 out of 10

Parents should be a little careful with this title. Sure, the violence isn't particularly graphic, but there's an awful lot of it, and much of it involves the bloodless death of humans. The swearing isn't any worse than your children might hear on television at the 9 o'clock hour, and there's nothing more suggestive than an impractically-tight snowsuit.

Action game fans have no excuse for not buying this. It's the best third-person to come down the pipe in ages, and should be played by anyone who enjoys putting their trigger finger to the test.

Multiplayer gamers will fiond the standard deathmatching options available here. Nothing worth writing home about, but still worth a look if you enjoy shooting other people as opposed to AI.

Deaf and Hard of Hearing gamers are fine. Important information is subtitled or printed on screen, and while they won't be able to hear the wonderful sound effects that herald the approach of enemies, many of them are so large that they shake the screen with their movements, which offers a nice cue.

Great job on nailing what makes Lost Planet so fun. It does indeed provide a near-perfect blend of difficulty, action, and exploration. And I too found the ever-dwindling supply of T-Eng a welcome addition to the gameplay. That said, I think part of the reason you thought the story so lacking is because you missed some pretty major points. For starters, they’re not on Earth. They’re on a planet that humans fled to in order to escape the overcrowding and polluted world we know as Earth. They came to EDN-III to start to colonize it, then fled when the Akrid… Read more »

You’re not wrong about me tuning out on some of the game’s plot – for some reason the game just didn’t pull me in at all – flat dialogue, trite characters… the only thing that wasn’t telegraphed from minute one was whether the scientist was going to turn out to be evil or not. Actually, I was aware that, according to the game’s story it wasn’t taking place on Earth, but every single thing about the level and art design seemed to fly in the face of that, making it seem like a tack-on idea that was introduced pretty far… Read more »