Burning Out His Fuel 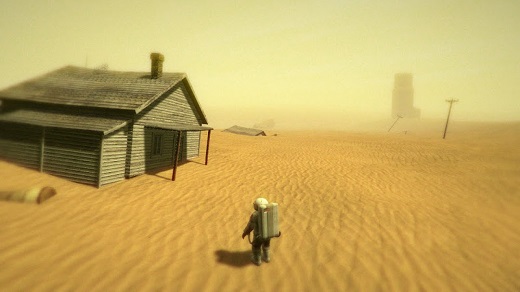 LOW Having to walk on high-tension wires in a spacesuit. How would that even work?

WTF Let's pause a moment for our national anthem!

The feeling of strange dirt underneath boots. The look of alien life with no analog on Earth. Watching a strange star rise over the wrong horizon.

These are the experiences that we want exploration-based sci-fi to capture. We want to see something impossible, then have the rush of discovering that our eyes haven't deceived us, and that the universe is far more interesting than we'd realized.

At its best, when it has the main character standing at the foot of an alien obelisk or standing atop a dam built to harness the energy of an alien river, Lifeless Planet captures this feeling. It's just too bad that for most of the game's running time, the experience is too muddled to express what it's trying to accomplish.

Lifeless Planet's biggest problem is the developers' refusal to think through the logic of the world they've created. They clearly found an image that resonated with them—that of a small Russian village on a dead planet deep in space. It's a striking juxtaposition, and well worth building a game around. However, its appearance at the outset of the adventure creates all sorts of issues because it doesn't make a lick of sense—and not in the good, trippy-70s-sci-fi way, either.

Sparky's main review was right to point out the dreamlike qualities of the game world. After all, the game opens with the main character being knocked unconscious, and for the first ten minutes or so he suffers from recurring hallucinations. If this were all taking place inside the head of someone dying of oxygen deprivation in a crashed lander, some of the bizarre design choices would have clicked. However, for some baffling reason, the developers choose to abandon ambiguity almost immediately. After some questions in the first half hour, it's one hundred percent clear that this is all literally happening.

The unfortunate side-effect of this decision is that it causes the player to focus on how little of the world is plausible. A giant dam is an amazing setpiece, but would millions of tons of concrete be shipped through a stargate to an alien world to allow for its construction? And if so, how did the Russians manage to build it when there are no roads leading to or from the massive project? Why would Russians have built their homes and base of operations so incredibly far from their main source of supply and reinforcement? There's no reason for it, other than the developers wanting the player to traverse the vast distance between different landmarks. It's this kind of thinking that keeps Lifeless Planet's narrative from working.

Going further, it's a shame that the story leans so heavily on the parallels between the main character's backstory (which is revealed far too late for it to resonate) and what he's discovering on the planet. If the developers wanted it all to be a dream, that's fine—I wouldn't have been satisfied, but I would have respected their decision to pick a course and follow it. Likewise, if they wanted it to be about someone exploring the ruins of a Russian outpost in space, they should trust that it's interesting enough to carry a whole game—which it would have been.

Unfortunately, the half-measure they decided on (the Russian installation is real, but has thuddingly obvious thematic connections to the main character) comes across as trite and hackneyed. It's so poorly-conceived that Lifeless Planet actually pulls out one of the worst clichés going—a dream sequence in which the main character is haunted by the ghosts of their past while jumping between floating islands.

For all the problems with its story, Lifeless Planet still dazzles with some amazing concepts, and from the alien architecture to the crumbling Russian infrastructure, there's always a new visual treat to marvel at. The developers have managed to created a beautiful world to explore, but whether some players will find the journey's tale worth experiencing is a different question altogether. Rating: 7.5 out of 10


Disclosures: This game was obtained via publisher and reviewed on the Xbox One. Approximately 6 hours of play was devoted to single-player modes (completed 2 times). There are no multiplayer modes.

Parents: According to the ESRB, this game contains violence, blood. Parents should be fine with kids playing this one. Yes, the astronaut can get killed in any number of ways, but they're not especially gruesome or traumatic. It'll be a nice change from all the exploding cars and severed heads they're used to.

Deaf & Hard of Hearing: Players should be mostly okay. There are a few audio cues to signal danger, but most also come with a visual companion. There may also be a few cheap deaths, but checkpoints are frequent enough that it won't be a problem. The story is told mostly through narrated mission logs, which can be read onscreen. All dialogue is subtitled.