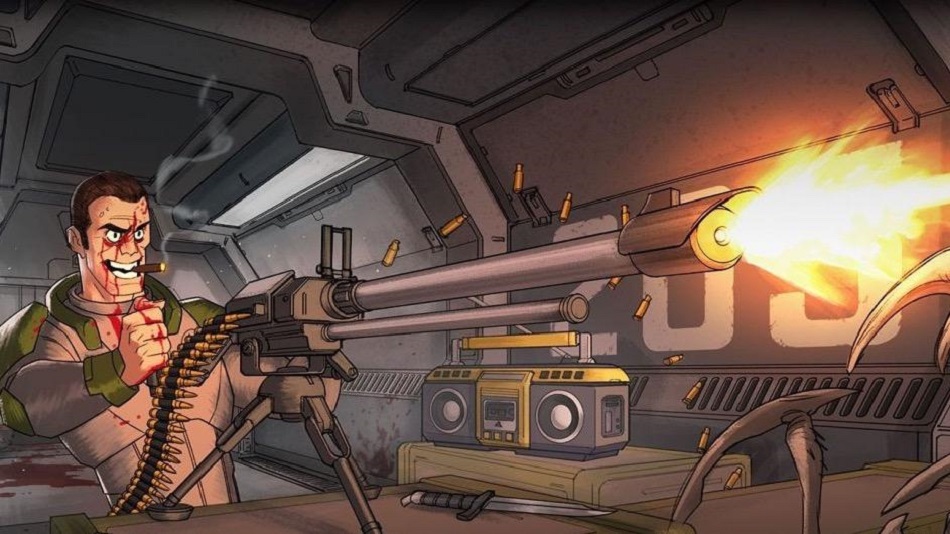 LOW The Blob that convinced me to quit the game.

WTF Why do the bloodstains disappear? I want to see the whole screen covered in alien guts!

Let Them Come posits a future packed to the gills with quickly-breeding aliens and suggests that the only possible solution to that problem is a tripod-mounted heavy machine gun. It’s a winning premise, and a perfect jumping-off point for a base defense game. So how did things go so utterly wrong?

It starts with the controls. Obviously designed to be played with a mouse and keyboard, LTC‘s developers have no idea how to get even basic aiming right on the XBO controller. It shouldn’t be that difficult – why not let players push the thumbstick in the direction they want to aim? It works fine in literally every other console base defense title. Instead, they ask the player to adjust the gun’s trajectory by degrees, tapping it up and down until they’re aimed at just the right angle. It’s incredibly easy to over-correct, and with the weirdly precise aim that many bosses require, this finicky control scheme guarantees frustration.

Then there’s the upgrading mechanic, and the strange way it handles failure. Where most other titles allow players to resupply and upgrade between levels, LTC has a different idea – let them play until they’re killed, and only then can they spend the money they’ve been earning by slaughtering aliens. Players then restart on the same wave in which they were killed, hopefully with a loadout capable of beating it this time.

The economy is wildly inconvenient, and has a bad habit of killing the game’s forward momentum. There are numerous foes that can’t be downed with basic ammunition, so the player is forced to purchase special bullets – flame, armor-piercing, explosive, and the like – but buying them doesn’t unlock a rechargable buff, or give them the weapons for a single wave. No, players have to literally buy every bullet they want to fire, and they’re not cheap. Shooting an alien earns one spacebuck. A single round of AP ammo, the cheapest special bullet, costs five spacebucks. Any time a special weapon is used, it will be at a crippling financial cost.

This economy is so bad that I would frequently find myself forced to die and replay the same level over and over again, hoping to gradually earn enough money to buy a sufficiently large amount of ammo to claw my way through to the next frustrating ordeal. Adding insult to injury, the basic machinegun can’t be upgraded in any meaningful way. By halfway through the game, it’s all but useless. 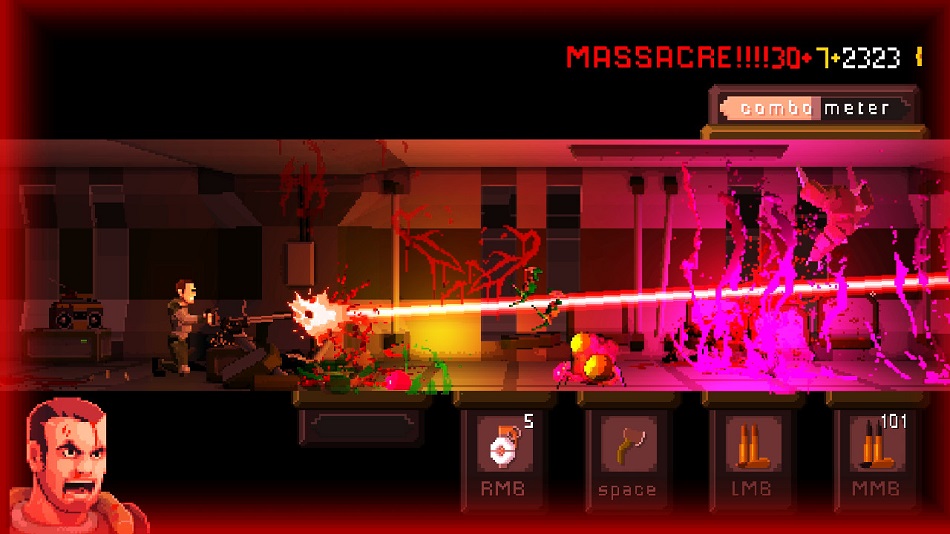 Even worse are the bosses, who are creatively unfair in a way that only Let Them Come could manage. Fighting each one generates an insultingly small amount of money, so when the player uses up all their ammo and still doesn’t kill the boss (a common occurrence) they’ll be looking at 5-6 more guaranteed-to-fail attempts before they have enough money to make another legitimate try.

While all of the bosses are awful, the fourth was so monstrously unfair that it drove me away from the game entirely.

LTC is about managing two lanes of attack – creatures on the floor, and creatures on the ceiling. The player’s gun can freely attack both areas, with grenades mostly focusing on the ground, and last-ditch physical attacks defending against aerial strikes. It’s not a bad system, unless a boss has the ability to attack both lanes simultaneously with waves of enemies so enormous that it’s impossible to guard against them. While I’m sure that there exists some combination of perks and weapons that might let the player defeat this boss, I wasn’t able to find it in the ninety minutes I spent banging my head against the problem.

Just to be clear, I spent three hours playing the game overall. A full half of that time was taken up failing to kill the same boss over and over again. Is it any wonder I gave up?

Let Them Come isn’t a total disaster. The pixel-art carnage is absolutely beautiful. The enemies are wonderfully detailed and explode into piles of viscera with the most satisfying death animations in ages. The soundtrack and sound effects are also great – the machinegun is just loud enough to make firing feel like an accomplishment without becoming grating.

With a better upgrade/weapons system and slightly nerfed bosses, Let Them Come would be a fine experience — the kind of quick diversion players could drop into for a few minutes of alien slaughter here and there. Unfortunately, at some point in development the decision was made to prioritize challenge and droning repetition over playability, and the result is a title that can only be enjoyed by players who like spending time with games that hate them. Rating: 4.5 out of 10

Disclosures: This game is developed by Tuatara Games and published by Versus Evil. It is currently available on PC and XBO. This copy of the game was obtained via publisher and reviewed on the XBO. Approximately 3 hours of play were devoted to the single-player mode, and the game was not completed. There are no multiplayer modes.

Parents: According to the ESRB, this game is rated M and contains Violence, Blood and Gore, and Strong Language. Not sure how the ESRB missed tobacco use. Every wave starts with the main character tossing away a cigar before getting to work.  As for the content, there’s nothing to this game but watching a soldier use a machinegun to turn aliens into splotches of paint. Also, he swears now and again. No kids, please.

Deaf & Hard of Hearing Gamers: While the game is almost entirely playable without sound, one enemy – the suicide bomber – offers a beeping warning before appearing, giving the player a chance to start shooting before he’s onscreen. It’s going to provide a bit of a problem.