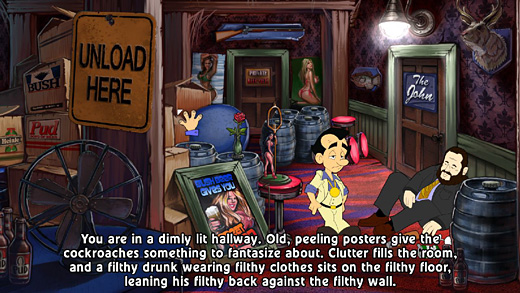 HIGH I wonder how many Naugas had to die to make that door?

LOW How many times am I going to have to reload this slot machine?

WTF Did Larry just drug a woman for sex?!? How did I forget that was in there?

brings all the dirty jokes and cheap titillation the series is known for back to the 2nd dimension after a couple of embarrassing 3D interludes.

Faithful may not be a strong enough word to describe the similarities between Reloaded and previous versions. Beyond the updated graphics, full voice acting, and just enough new content to nudge an initial playthrough over the 3 hour mark, this is essentially the exact same game as the VGA version of the title released in 1991 with a huge amount of puzzles, solutions, and jokes left untouched.

For the many, many, modern gamers unfamiliar with the original, Leisure Suit Larry is the story of a 40-year-old virgin who travels to the town of "Lost Wages" in the hopes of finally bedding a woman, only to discover that it was love he was looking for all along. Players will guide Larry through five locations over the course of his big night—a startling two of which feature more than two screens! No, it's not a big game by any definition of the word.

The new graphics are weirdly hit-and-miss. All of the cartoony static backgrounds are lushly-drawn and full of interesting detail, as are the character portraits that pop up whenever Larry tries hitting on a woman. The actual animated characters are strangely crude in comparison. Simple line drawings filled with flat colours, they look like concept sketches that have somehow made it into the finished product—a sense that isn't helped by the primitive, jerky animation. I understand that this is a low-budget, kickstarter-funded game, but the clash in art styles is so severe that it's quite jarring a lot of the time.

Graphics aside, much of the game's appeal rides on whether or not the player's sense of humour aligns with the designers'. The characters are all broad, unflattering stereotypes, and main character Larry is an out-of-touch, would-be lothario chasing after women portrayed as whores, golddiggers, and personality-free beauties.

The jokes are mostly scatalogical in nature—does using a helium-filled sex-doll as a floatation device seem particularly hilarious? How about a hidden object game parody in which the player has to determine which stomach-churning splotches of food don't belong at the world's most disgusting buffet? A trenchcoat-clad flasher that's revealed to be two naked midgets, one standing atop the other? For anyone whose funnybone is tickled by this type of gag, the game has dozens more to offer. 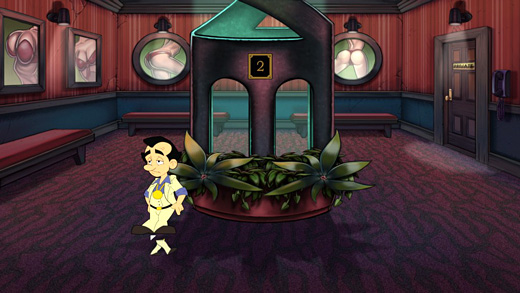 The puzzles are mostly on the fair side, as far as adventure games go. There's little, if any, moon logic on display, as the game hews closely enough to reality to allow players to figure that if they need batteries to operate a remote, they're probably going to have to harvest them from something battery-operated—and hey, is that a cabinet full of sex toys over there? If the puzzles ever seem daunting, there are always 20-year-old FAQs kicking around the internet full of still-viable tips, and the game is careful never to trap players in dead ends. Even death will simply reset Larry back to just before he made his fatal error.

While the puzzles are fair, the amount of backtracking and pixel-hunting the game requires definitely isn't. Reloaded fits neatly into the "pick up everything that isn't nailed down; figure out what it does later" school of game design. Players are expected to click on basically everything, hoping to discover the few items here and there that are worth lugging around to be used an hour later. The game tries to make this process as painless as possible by having the narrator pop in with jokes for every failed click, but it still gets old by the end of the game.

If being forced to travel back to previous locations time and again wasn't bad enough, the game's "economy" turns a frustration into torture.

Larry starts the game with around a hundred dollars. Every cab ride costs around 20 dollars—between the rides and some plot-required expenses, somewhere in the neighbourhood of 600 dollars will be required to beat the game. How is the rest of the money acquired? By playing video blackjack and slot machines, of course!

As far as I could tell—and the game is no help in this regard—the devs seriously expect players to relive the "gameplay" of the late 80s as they sit in front of a virtual virtual gambling machine, saving every time they win a hand and loading every time they lose. While performing this ridiculous task wasn't a large portion of the gameplay by any means, every second of it was an utterly wasted moment with zero entertainment value—and due to a mid-game bankruptcy, the player will have to go through the whole process twice. It's borderline-inexcusable that this made the cut when the developers were deciding what to bring back for the new version.

With its low-brow humour and salacious trappings, the original Leisure Suit Larry made quite an impact back in the '80s, spawning a long series of adventures for its star. What it didn't do, however, is lead to adult-themed humorous video games becoming a popular genre. For all our use of the word "mature" as a signpost for the advancement of games as an art form, perhaps it's time to consider the fact that in every other medium it's perfectly acceptable to make something that's fundamentally "immature" without being in any way intended for children.

It may not look fantastic and certain mechanics shouldn't have been resurrected along with the rest of the game, but Leisure Suit Larry: Reloaded

succeeds at being a brief bit of naughty fun—and since it never aimed any higher, that definitely counts as a win. Rating: 7.5 out of 10.


Disclosures: This game was obtained via publisher and reviewed on the PC. Approximately three hours of play was devoted to single-player modes (game was completed).

Parents: The game was not classified by the ESRB, but it contains cartoon violence, sexual themes, nudity, strong language, drug and alcohol use. Keep the kids far away from this one. It's the equivalent of an R-rated sex comedy, only with considerably less nudity (not that some doesn't sneak in there). There's violence and creepy drug use, along with a couple of visually censored sex scenes. Luckily, the game will help you out by recreating the original title's opening quiz that locks out players who can't answer questions that an adult should know. Unluckily, that design concept was invented before the existence of Google made it irrelevant.

Deaf & Hard of Hearing: All dialogue is subtitled, and there are no audio cues. Why would there be? It's a graphic adventure.