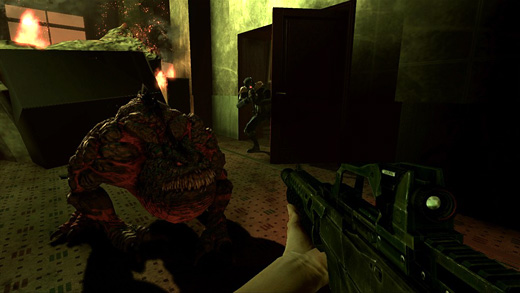 LOW If I never shoot another black body armour wearing stormtrooper, it'll be too soon.

WTF There are flying babies with razor-sharp fangs and insect wings. If only this monster design had been used in a better game.

It's always a challenge to review the bland games. If Legendary were the only first-person shooter I'd ever played, I'm sure I would be impressed by the decent loading animtions, the wide variety of enemies, elaborate boss fights, and large arsenal. Unfortunately, It's not the first game I've ever played, and when a game seems so utterly incapable of doing anything new or interesting, it's sort of hard to reward it for simply existing without being terrible.

To its credit, Legendary does have an interesting introduction. As the game opens, the main character (a thief who's been employed to break into New York's Metropolitan Museum of Art) opens Pandora's Box, unleashing monsters into the world and getting a nifty set of powers at the same time. Powers that sadly don't include being able to climb over a three-foot wall. Yeah, the amazingly generic action hero hasn't mastered clambering. I wish I could say that was a surprise.

Once he gets outside, the game has one spectacular setpiece; as a New York midday gridlock has turned into hell through the simple inclusion of Ghostbusters-scale earthquakes and bloodthirsty gryphons that swoop down and devour bystanders like owls snatching field mice, the player is forced to struggle their way down the street, searching for weapons and desperately avoiding death. Then just when it seems like nothing else can go wrong, all of the traffic in the street hovers into the air and forms itself into a giant metal man, forcing the player down into the sewers, which, naturally, are full of werewolves and miniature lava dragons. 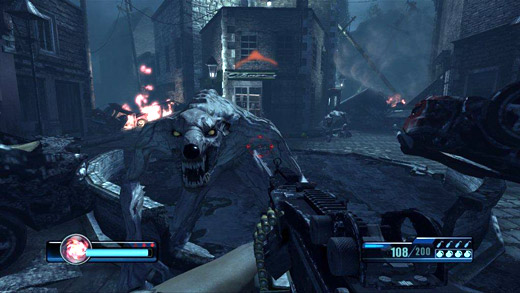 At this point I was having a grand old time, but when I made it up to the surface,the game took one hell of a nose dive. The second I arrived at street level, a dropship swooped in. As the door on the back of it slowly slid open, my heart started to sink. "Great," I thought, "Now the generic stormtroopers show up." And show up they did. For a game that purports to be about shooting at legendary monsters with a gun, I burned through far too much ammo trying to kill guys in black body armour with assault rifles. If that description of the enemies seems familiar, it's because you've played against them in every game ever made. I'll give Halo this—as stupid as pink body armor looks, at least everybody's not wearing black.

After the fantastic opening scene, the game sheds all pretense of pacing and setpiece design. Things move from a hectic and interesting street setting into generic warehouses, castles, and European villages. Even the gryphons, after receiving such an incredible build-up in the game's opening minutes, disappear from the game except for a late game sequence where they're reduced to little more than clay pigeons for the player to blast out of the sky with a rocket launcher. Watching the terrifying monstrosities easily reduced to clouds of blood and feathers was somehow dispiriting.

I'm really not sure what the developers thought they were doing with the inclusion of an endless stream of gun-toting stormtroopers, but if it was anything other than reducing a promising concept to a thuddlingly generic exercise, then they screwed up royally. There are a few promising things on display here—fighting monsters is a nice change of pace, the system of sucking energy out of dead monsters replacing the default ‘regenerative health' keeps the action moving quickly, and creepy wasp-babies that telekinetically throw furniture around.

Everything else is just too old hat to be of any value. The restrictive pathways, generic human enemies, by-the-numbers plot… Legendary is almost indistinguishable from a dozen other first-person shooters out there. Sure, it's acceptable and competent and a whole host of other slightly back-handed compliments, but there's plenty of better FPSs I could have been playing, significantly reducing its reason to exist. There is inspiration underlying this game; it's just too bad the promising first thirty minutes wind up buried under hours and hours of mediocrity.  Rating: 5.0 out of 10.

Disclosures: This game was obtained via publisher and reviewed on the PS3. Approximately 12 hours of play was devoted to single-player modes (completed 2 times) and 1 hours of play in multiplayer modes.

Parents: According to the ESRB, this game contains intense violence, blood and gore. It's a shooting game, so obviously the violence is going to be pervasive, but that being said, it's not as bad as the indicators would suggest. Yes, the killer wasp babies are disturbing, and werewolves have to be decapitated to finish them off, but the worst violence is always directed at non-human creatures.

Deaf & Hard of Hearing: As usual, not being able to hear enemies coming puts you at a disadvantage, but not a fatal one. Red indications on the screen indicate where attacks are coming from, so at  least you've got that. There's subtitling for the story, at least.

Note to all developers, you’ve practically doomed your game with a name like Legendary.

As far as the story goes, I just hope that the game ends with the lead character being hung by his thumbs and whipped to death. A thief that opens Pandora’s Box (again) dooming the world to a war with werewolves, Griffons and other mythical beasts? There can not be a happy ending for this dude.