Trying to Tell Y'All 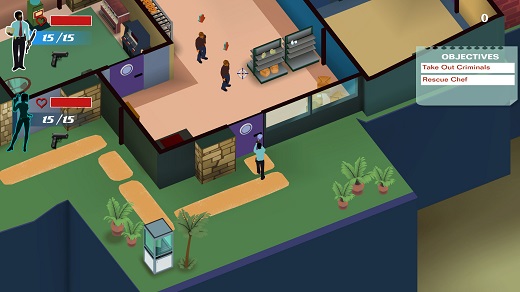 HIGH Gunning down thugs with an assault rifle as they blindly charge my chokepoint.

LOW Trying to convince my AI partner to be of any help whatsoever.

WTF So many mustaches!

If it accomplishes nothing else, LA Cops does a great job of cementing the idea that the video for the Beastie Boys' 'Sabotage' is how history will remember the concept of American police in the 1970s. It's set in a world of afros, sideburns, mustaches and sunglasses, where cops shoot first and don't bother asking questions because police work has more to do with trigger fingers than typing up reports.

An isometric 2D shooter, LA Cops takes its player through a dozen different locations with only the barest hint of a plot linking them together. It's delivered in a bright, blocky aesthetic, where rotoscope-styled characters race around rectangular landscapes, trading shots with one another. It's extremely reminiscent of Interstate '76, although I fear that reference is probably far too old to be of any help whatsoever.

Everything except the gameplay is top-notch. The vibrant aesthetic is eye-catching and entertaining, and the cut-scenes are essentially a wink that the game is aware certain archetypes exist. It sets them up, and then moves forward as quickly as possible without getting too worried about any particular character or storyline. It's all brisk and enjoyable until players start trying to play the game.

LA Cops puts players in charge of a pair of detectives tasked with picking a level and then shooting a number of enemies or clubbing them into submission. There's no variety to the missions they go on. Every now and then a time limit will add a little pressure, but that's about as innovative as things get until the final—incredibly frustrating—level.

At any given point the player will be controlling one cop while leaving the other to provide overwatch, firing on any foes who wander into a wide arc in front of them. This suggests a tactical action experience where the player raids rooms while an AI partner covers their back. In practice this does not work out well.

I can't count the number of times I attempted the simplest trap in the world—leave a partner in a corner behind a door, run through that door, and then run back as his buddies chased me, allowing my partner to shoot them in the back. Seems foolproof, but it almost never worked.

If more than one enemy ran through a doorway, the AI would get confused about which foe it should be targeting, and this hesitation consistently gave enemies more than enough time to execute both of us. This is literally the simplest thing that the partner AI could be asked to do, and the technique is specifically referenced in the tutorial, yet it refused to work in practice no matter how I positioned the AI to cover me. Eventually I became so frustrated with the AI failures that I decided to treat my partner as an extra life should I be gunned down, and I wound up much happier for it.

Sadly, the rest of the gameplay isn't much better. There's a neat feature that allows the player to spin the camera 180 degrees around to plan their next move. Unfortunately, planning goes out the window when the shooting starts. LA Cops belongs to the Hotline Miami school of 'everyone has 1HP' design. As a result, each encounter is won by whoever has the quickest trigger finger. This wouldn't be a problem if the game's enemies didn't possess supernatural reflexes and aiming ability. Leveling characters up can give a bit of a buffer, but the currency used to increase stats is earned so slowly that players would have to grind levels dozens of times before the AI's advantage would noticeably decrease.

Other complaints? The game allows players to aim manually with the mouse, or they can press a button to lock on to the nearest foe. However, I have no idea why anyone would ever choose to aim manually—if I'd waited until I could see an enemy before shooting, I'd get killed every time. The only successful technique I found was to use the lock-on button to target enemies before they were onscreen, giving me a split-second edge to shoot them as they rushed into the room I was in. I'm sure it wasn't the way the developers had intended me to play, but since they'd so completely botched the game's difficulty curve, I wasn't particularly worried about what they wanted.

LA Cops is a gorgeous piece of art design which, by all rights, should have served as the foundation for a classic indie shooter. The utter failure of its gameplay to deliver on that potential frustrates to no end. This is clearly a game with a lot of talent behind it, but I have no idea how they botched things so badly. Rating: 4 out of 10


Disclosures: This game was obtained via publisher and reviewed on the PC. Approximately 6 hours of play was devoted to single-player modes (completed 1 time). There are no multiplayer modes.

Parents: According to the ESRB, this game contains blood, violence, drug reference. You probably shouldn't let your children near this one. In addition to the frustrating nature of its broken gameplay, there's also a lot of casual violence, corruption, and vigilantism. Not to mention smoking and drinking and drugs, this being set in the 70s and all.

Deaf & Hard of Hearing: You're going to have problems. The only sane way to play the game is to be ready to shoot enemies before they appear on screen—but if you can't hear them go into alert mode and charge towards you, you'll be at a huge disadvantage. Prepare for frustration if you try to play this one.