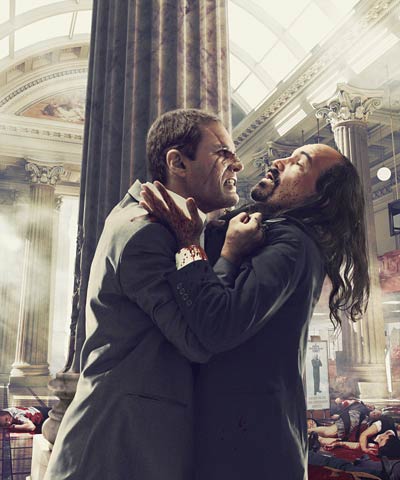 I do my best to keep expectations out of game reviewing and go into games fresh. Usually it's not all that difficult. I don't read previews or interviews with developers working on a game. With very few exceptions videogames aren't advertised on television, so that doesn't pose much of a problem, and internet ads rarely make much of an impression. The only place I ever see screenshots is when I head by the Magic Box to get info on all the wonderful Japanese titles I'll never play. As a result, all of my inferences are drawn and prejudices created from my previous experiences with a given game's developer. This policy, designed to let me review games considering nothing but their own merit, ended up creating a minor issue in my review of Kane & Lynch.

Hearing that IO Interactive was working on a 2-player title with a crime theme, my mind jumped to the only logical conclusion—that they were making the co-op Hitman title that all right-thinking people have been demanding for five years now. Upon playing Kane & Lynch, I suddenly remembered that in addition to that franchise, IO also produced Freedom Fighters, the cartoonish squad-based shooter about a plumber thwarting a Russian invasion of America. It was a minor success, but despite the 'Americans as Insurgents' plot, it never grabbed the public's attention the way ol' Agent 47 has. So who could have guessed that it was Freedom Fighters, and not Hitman that was being used as the template for this title? I am completely ready to admit that going in, K&L had a strike against it simply for not being Hitman: Co-op. Every other strike the game received, however, it earned in spades.

A third-person shooter with a focus on co-op play and squad control, Kane & Lynch tells the story of two worthless killers sent after a mysterious briefcase by a poorly-named group of mercenaries, all in the hope of saving one of their families. Luckily, the other one murdered his family, so there's no one that needs saving. This story takes them around the world, where they accomplish most of their goals by murdering police officers and, to a lesser extent, prison guards. Kane & Lynch attempts to tell a legitimately R-rated story in a videogame. It succeeds in doing that beyond all measure. Where it falters is in being a videogame. 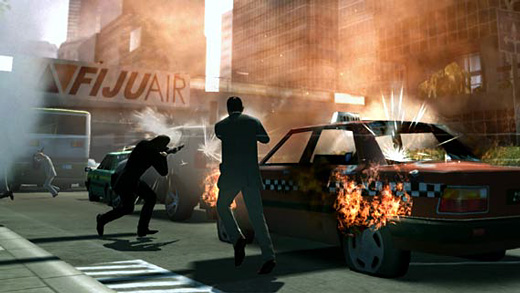 Where the game's story must be applauded is that it is delivered with utter seriousness. It's a game about bad people who do bad things to good people in the hopes of not being killed by a group of slightly worse people. There is no winking to the audience, there are no clever puns. This is a mean game, and it stands tall alongside Manhunt 2 in its attempt to be a game that is not only intended for adults, but that children absolutely should not play. That's not to say there aren't any problems in the storytelling. No, there are huge logical holes and improbable contrivances, and serious identification issues. It's hard enough watching a film about unpleasant murderers when they're given motives for their actions and snappy dialogue. Being asked to play as completely worthless people who speak primarily in exchanges of unimaginative profanity is a step that most people aren't simply willing to take. I respect IO Interactive for having the resolve to tell this story, even if it proves to be a story that's nearly impossible to enjoy playing through.

Any trouble with the story is massively eclipsed by the gameplay issues. The biggest of these comes in the form of shoddy partner AI. This is always a troublesome area—if the partners are too smart, the player can just hang back and let them play the game, too dumb, and the title becomes a baffling ordeal. Kane & Lynch's troops fit neatly on the slow-witted side of the divide. While being able to order them to move around and target certain enemies helps a little, they're just not good enough at shooting opponents to be of much use. This isn't such a problem when the game is being played in co-op mode, with a reasonably competent partner, but alone, every level is so combat-intensive that struggling with the partner AI just gets tedious.

Just controlling the characters sways towards difficult as well. The aiming and shooting is competent enough, but the cover system is woefully lacking—given how much surviving the game relies on not getting shot, this is a problem. It seems that the developers ran out of buttons on the controllers before bothering to program in a 'use cover' button, so instead they ask the players to run up to the object they plan to use as cover, and just automatically stick to it. This is a scheme that's worked before, but it doesn't here, because the game doesn't allow the player to stick to any flat surface, and then sidle their way along to the corner for a little of the old peek-and-shoot. No, Kane & Lynch demands that players figure out exactly where the 'corner' of any wall or item is, and then expects them to run up to it at the correct angle. What should be the simplest part of the game—ducking for cover, popping out to shoot someone, moving to the next cover—becomes an exercise in trial and error, where past experiences are no guarantors of future performance.

Perhaps all of these problems could have been mitigated if the level design wasn't so spotty and uneven. It's as if the game is broken up into two halves. A decent, somewhat intriguing first half, followed by an insane, frankly useless second half. The beginning the game at least has some novelty to its premise and setting. Robbing a bank and then escaping from the police is still an unusual enough sight in a game that it's fun just to do, there's a prison break sequence that's as good as any I've seen in a game, and an assault on a skyscraper is so audacious in its presentation that it's impossible not to enjoy. 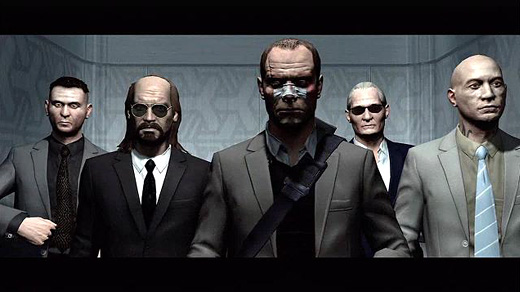 The real standout, though, is a level set in a crowded dance club. Pushing my way through a throng of people while my partner spotted for me from a catwalk—directing me towards the flashlight-carrying security guards—was such a great experience that it made me question whether the rest of the game was going to turn out to be as mediocre as the beginning had suggested. Then the game went and ruined it by making me play through the entire club level a second time, only now it had been completely evacuated, and I was forced to just gunfight enemies in large, empty rooms without any trace of novelty and innovation. The whole game suffers from this problem on a larger scale in the second half, when all pretense of being a crime or 'caper' game goes out the window, and Kane and Lynch find themselves heading down South America way to fight on the communist side in a Cuban civil war, and then go trudging through a seemingly endless series of jungle levels. It's almost as if the developers ran out of ideas halfway through and then just phoned the remainder in.

If the game has a silver lining, it's the co-op mode, which allows a second player to control Lynch, who is normally just an AI sidekick. Not only does having a friend along make all of the combat much easier, but the story is improved immeasurably by being able to see it through Lynch's eyes. Once again linking thematically to Manhunt 2, Kane & Lynch does a pretty good job of depicting things through the filter of a deranged mind. Whenever Lynch gets too stressed, his half of the screen begins to blur and warp, and innocent bystanders begin to resemble deadly threats. In the single player mode, I found myself shocked and horrified to discover that Lynch had murdered a room full of hostages. Only by playing again as Lynch did I realize that, given his point of view, it seemed like the best possible course of action. Sure, giving the player multiple viewpoints on a single event is a pretty common device, but it works especially well here, actually putting the player in the role of the deranged killer, and demanding some understanding, if not sympathy, for their actions.

Kane & Lynch seems to have been produced to answer an important question: "What if, instead of completely sucking, the Reservoir Dogs game had only moderately sucked?" The real tragedy here is just how badly squandered the premise is. Between the crime setting and the developer's willingness to make a legitimately bleak and unpleasant game, there was so much potential here. I just can't understand why it was all squandered with shoddy storytelling, mediocre-to-passable gameplay, and a dreary second half. That there was talent behind the game is undeniable. Poor design decisions and an overall shoddiness of presentation keep it from ever achieving anything of value. Given the subject matter, Kane & Lynch never had a chance of being a fun game, but it had every chance of being a good one. It's not. Rating: 4.5 out of 10.

Parents should under no circumstances allow their children anywhere near this game. The tale of vicious murderers who kill innocent people to achieve their goals, K&L is as morally questionable a game as you're likely to find. Sure, the story throws in a few random nods at redemption, like having the main characters occasionally feel bad about all the people they're killing, but that doesn't change the central awfulness of nearly every bloody murder that takes place over the course of the game.

Fans of Noir and Crime cinema take note, this is the closest approximation to Heat you're likely to get in a videogame. So if you're dying to play that famous bank robbery, this is your best chance. Unfortunately, the game's fractured, often ridiculous storytelling keeps the plot from reaching the level of a decent film, and the random, senseless slaughter is a lot harder to take when you're the one causing it, rather than just a passive observer.

Co-op loving gamers will want to pick up K&L not just because the main game is centered around a co-op mode, but because the multiplayer minigame is entirely co-op focused. Rather than simple deathmatching or objective-based play, the game, called 'Fragile Alliance' allows teams of players to rob various locations, then attempt to escape as the computer-controlled police hunt them down. Although it suffers from the same control issues as the main game, overall it's a breath of fresh air in an otherwise frustrating title.

Deaf and Hard of Hearing gamers will be mostly fine. Dialogue is subtitled and directions are given with an onscreen radar. Sadly there aren't full captions, so the whens and where of gunfire will likely be a mystery until you're actually being shot. Luckily, the game features progressive, regenerating health, so you won't be at too much of a disadvantage.