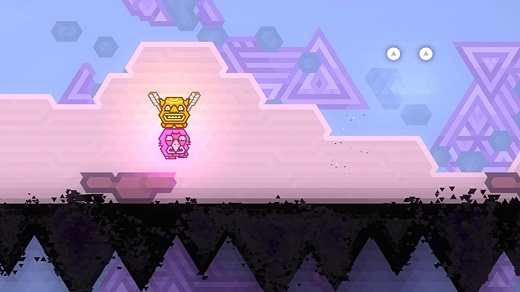 HIGH Executing the perfect dance of leaps and switches required to kill the snake boss without losing a life.

LOW Some of the multiplayer levels straddle the line between 'fun' challenging and 'I hate life' challenging.

WTF Dear Advice Bear—I can read faster than you can speak, okay? So stop whining at me about advancing your text bubbles!

Converging at the intersection of puzzle and action games, Kalimba puts players in control of a pair of totem pole segments that deliver some of the most frustrating and addictive gameplay I've seen in quite some time.

The defining gameplay mechanic here is parallel action. While the player's twin totem pieces will sometimes be stacked, the vast majority of the game sees them moving separately across the top and bottom of the screen, with the player handling both simultaneously.

Thus, the game starts out jarringly at first, as every instinct a player has tells them they should be keeping track of both their totem pieces, especially since a mistake with either one will set them back to the last checkpoint. Kalimba asks players to do something a little more challenging, however—it encourages them to simply focus on one of their characters at a time, with faith that the same jumping and sliding techniques for one will get the job done for the other as well.

The game excels at smoothly introducing new gameplay elements. Early levels ask players to execute some jumps and outwit some flying masks. Nothing too hard about that. Then a mechanic where the totem pieces instantly switch places is layered into the levels. Then, the totems are given animal powers, gravity is getting reversed, and giant monsters are chasing the player through winding ice tunnels full of trampoline floors and tinted death zones.

It can get incredibly nasty at times, but the developers have set checkpoints every ten seconds or so, ensuring that players will be able to easily retry frustrating sections over and over again until they figure out what they were doing wrong.

Aesthetically, Kalimba is a triumph of design. The totem-pole motif is an interesting place to start, but the developers take their influences to bizarre and interesting places by crafting a world entirely out of triangles.

We've grown accustomed to a few overall art styles in video games—from realism to celshading, to pixel-retro and so on. The triangles that make up Kalimba's world aren't fundamentally different than pixel art, but the change in shape revitalizes the game's look. The jagged points at the edge of every shape suggest danger and speed—it's almost subliminal design cleverness, and it does an amazing job of making the game's worlds and characters feel fresh and vital.

Level construction is also stellar, with each one of the twenty-odd areas offering new kinds of obstacles and puzzles to decipher.

Whether the player is bouncing the two totems off each other while floating through the air, rapidly changing their size to fight enemies, or getting very good at swapping colors down kaleidoscopic chasms, there's a constantly increasing level of challenge as the game progresses. In fact, Kalimba is so great at training players to be amazing at it, I went back and blew through some confounding early levels after I finished the game.

With bright. beautiful graphics and fantastic level design, Kalimba is a near-perfect action/puzzler that's always challenging in the most rewarding way. It's rare to see a game so difficult be so encouraging, and the developers should be applauded for making this kind of hardcore skill experience accessible to everyone. Rating: 9 out of 10


Disclosures: This game was obtained via publisher and reviewed on the Xbox One. Approximately 7 hours of play was devoted to single-player modes (completed 1 times) and 2 hours of play in multiplayer modes.

Parents: According to the ESRB, this game contains mild fantasy violence, tobacco reference. It's fun and harmless and the frustrating parts are so well-managed that you don't even have to worry about your little ones shattering the television with a thrown controller! There's a small amount of pipe-smoking in the game presented in a non-judgmental fashion, so be aware that you may want to let younger kids know that's not a good idea. Older kids already know that pipes look ridiculous.

Deaf & Hard of Hearing: You will be able to play the game well enough, as there aren't any audio cues of note!