A New Attraction has Opened! 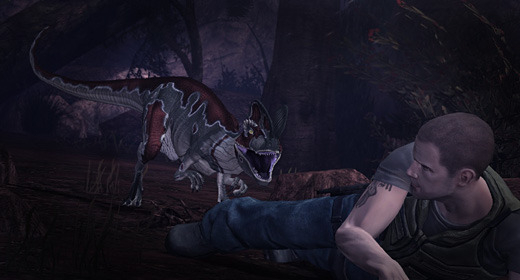 WTF Now is not the time for a conversation about your troubled relationship!

Yu Suzuki started with a dream—to make the world's first truly interactive movie. By largely automating complex action sequences, he would make players feel as if they were taking part in the kind of thrilling stunts that are commonplace on the big screen—the kind of stunts that video game controls are sadly incapable of recreating. It was a bold vision, but unfortunately, the interactive movie he made largely involved wandering around Yokohama and asking people what they saw on 'the day of the incident.' David Cage eventually picked up the ball and ran with it, but his plodding, pretentious plots overshadowed immersive gameplay. Luckily Telltale Games was there to grab the baton, and with Jurassic Park: The Game

, they've given the world the first truly interactive adventure movie.

Set during the events of the film, Jurassic Park tells the side-story of a wide variety of characters as they struggle to escape the island and retrieve the canister full of dino embryos that actor Wayne Knight died trying to steal in the movie. It does this by running the player through a series of exploration, dialogue, and action sequences, all perfectly arranged to create the pace and tone of a Hollywood action film.

Shenmue gave players an open world to explore and let them search for the action. Indigo Prophecy (known as Fahrenheit outside the U.S.) and Heavy Rain streamlined this concept, setting the player inside rooms and having them walk around with a strict time limit, looking for the right area to stand in to trigger the next event. Jurassic Park takes the next logical step by almost entirely removing free player movement and focusing on allowing them to visually search and interact with the environment in scripted ways.

The system works elegantly, allowing players figure out how to deal with entirely believable puzzles and threats. There are no secret doors with marble-jumping locks to be defeated here. Instead the game offers up generators that must be restarted, door codes to crack, and blueprints to decipher. In a nod to the casual audience of these games, only the action scenes are timed, so players will have all the space they need to figure their way through the film's familiar environments.

The action scenes i just mentioned are similarly excellent—cribbing from Heavy Rain, the developers have generated immediate, compelling QTEs by involving the button press indicators in the action itself. A large amount of work has gone into the game's direction, and its use of camera moves to draw the eye naturally to the location where an indicator is going to pop up is peerless. These are, simply put, the most well-designed QTEs I've ever come across. It's too bad that a few minor technical issues (some of the 'quickly tap a button' actions are too difficult, and a few early-game QTEs are buggy about accepting commands) keep them from being an unmitigated triumph. Still, it's interactive movie gameplay head and shoulders above everything else in the field.

Perhaps the most wonderful part is that all of this technical brilliance is being put in service of such a fantastic plot. While not the deepest story by any means, all of Jurassic Park's characters are likable and interesting, and good writing is enlivened by fantastic voice acting across the board.

The story's pacing also deserves to be singled out for praise—the plot moves along at such a good clip that I sped through the game in just two sittings because I was so compelled to find out what happened next. Each action setpiece is legitimately thrilling and completely justified by the plot, fans of the series will be satisfied by the greater exploration of the film's locations, and anyone worried that the game won't have anything new to offer will find themselves pleasantly surprised. I'm not going to reveal the new dinosaur here, but suffice to say that if the Raptors were the slasher movie villains of the dinosaur world, these new creatures (whose heretofore unknown existence is adequately explained) are like something out of an alien invasion picture.

With Jurassic Park: The Game

, Telltale Games has done nothing less than perfect a framework for the future of the cinematic adventure genre. While it may not be the deepest entry out there—its mid-range budget and development schedule means that it lacks the branching plot and multiple endings that encourage replayability—it is unmatched in its ability to draw players into the story, and carry them along right through to the thrilling end. The promise of Yu Suzuki's Shenmue has finally been realized, and while it might not be in a form he would recognize, the dream of an engrossing playable film is finally a reality. I can't wait to see what they do with it next. Rating: 9.0 out of 10.


Disclosures: This game was obtained via publisher and reviewed on the PC. Approximately 6 hours of play was devoted to single-player modes (completed 1 time).

Parents: According to the ESRB, this game contains blood, mild language, mild suggestive themes, use of tobacco, violence. If your children are fine with the movie, then they should be fine with the game. Be warned, however—the T is there for a reason. Children are threatened—by dinosaurs in the game, and by the threats of crushing poverty in stories that are told within it. There's also plenty of blood, smoking, and a scene of just startling brutality.

Deaf & Hard of Hearing: You should be just fine with the game. While the sound design and voice acting are both excellent, the game's action sequences are all QTE-based, and therefore entirely visual in nature.

PC Gamers: I had some issues with the framerate playing on the highest detail settings, but once I turned them to medium the game moved along quite smoothly. You'd be better off playing the game with a controller—I tried it both ways, and the keyboard has some complexity drawbacks that slow the game down and make timing-based QTEs more difficult. Conversely, it's far easier to win button-mashing QTEs on the keyboard for some reason. Finally, the game was clearly designed for big-screen televisions, so a few key inputs may be harder to see on smaller screens.

Considering how hard this game seems to be bombing with critics and gamers alike, I was beginning to think I was the only one in the world who enjoyed it. Sure, there’s little to the gameplay, but apart from the obvious budget cuts, I think it almost totally succeeds at what it’s trying to be – an interactive movie with no room to break the pacing. No branching paths, no exploring the park, no dinosaur shooting. It is what it is, and it’s very good at it. I think Jurassic Park is a good conversation piece about what games “should”… Read more »