They Mean ‘Guns and Swords' 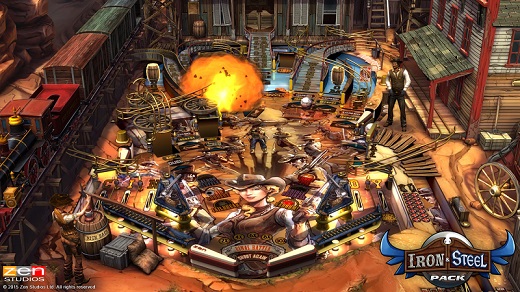 HIGH My ball returning by bursting through a window.

LOW How easy it is to drop out of the upper playfield on CastleStorm.

WTF Seriously, though, the gunslinger's name is Cindy?

The Iron and Steel table pack is a strange twosome, as the developers at Zen Studios have stapled together two tables which couldn't have a weaker thematic connection if they tried.

I completely understand Zen making a CastleStorm table—it's a good game and a solid intellectual property for them to exploit. Since they already make a pinball platform, it's a no-brainer to expand that franchise over.

The Wild West Rampage table, though? It's just baffling. Why would anyone attach the adventures of a gunslinger named Cindy to a swords-and-sorcery themed table? When they were putting out a table based on The Walking Dead, I didn't see Zen Studios announce 'if you want to buy that, you've got to buy a table about working as a carhop in a 50s diner!'

The strangest part about this whole bizarre marketing experiment? The Wild West table is actually the better of the two.

CastleStorm transports characters to the world of the titular artillery/CTF hybrid, where brave knights and treacherous wizards do battle with dragons and vikings. Aesthetically speaking, the table is gorgeous. CastleStorm's cartoonish art design is instantly recognizable, and makes a great transition to the world of pinball, whether it be as 2D table art, 3D models, or the scoreboard's animations. While the art is great, however, the table itself isn't designed with any particular style.

The wide playfield design is suited to allow 3D characters to wander around the playfield as animated targets, but it doesn't provide much thrill otherwise. With all of the ramps lined up side by side at the top, and almost no center features to interact with, CastleStorm is dependent entirely on its game modes to keep players interested. While they're all well-designed, they can't make up for the fundamental lack of impressiveness in the table.

Wild West, on the other hand, is a perfect example of great table design working with solid mode construction to create a stellar experience.

While it lacks CastleStorm's bright color and art style, it makes up for any artistic shortcomings with a tricky and thrilling field. At every conceivable spot on the table there's a drop target, ramp, or hole to hit, with extra flippers well-placed to make combos simple. The gutter entrances are also small enough so that losing a ball rarely feels cheap. The play modes are equally high-quality, offering good approximations of all the duels, train robberies, and saloon fistfights one would expect from a Western tale.

While they're certainly a strange pair, I'm glad Zen combined these two tables into a single five-dollar package. While I quite probably would have paid three dollars for CastleStorm, I doubt I ever would have taken a chance on a complete unknown for the same price. Maybe their plan was to convince people to throw a little extra money at a dud by attaching it to something with brand recognition, but in the end, the unknown was the real gem. Rating: 7.5 out of 10


Disclosures: This game was obtained via publisher and reviewed on the PS4. Approximately 4 hours of play was devoted to single-player modes (completed 1 time) and 2 hours of play in multiplayer modes.

Parents: According to the ESRB, this game contains fantasy violence. It's a pinball game, why are you even asking me? Let them go nuts. Sure, there's a saloon in the Wild West game, but it' not like there's drunks stumbling around being obnoxious. It's fine.

Deaf & Hard of Hearing: You'll be completely okay with this one, as there are no audio cues. The closest you'll come are sounds letting you know when a mode is close to ending, but there's always an onscreen countdown to go along with them!