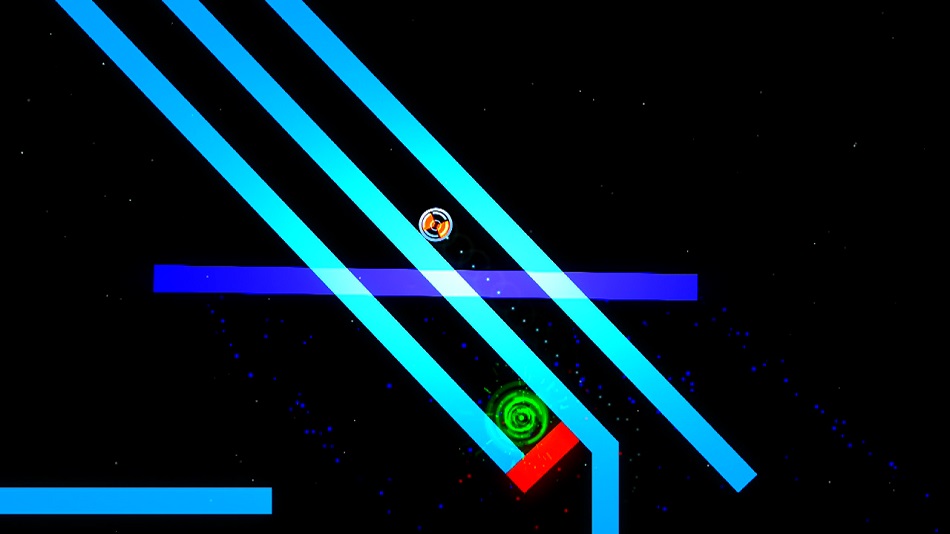 HIGH Flying across the entire map while zoomed-in tight and hitting the bullseye.

LOW Any time I’m asked to ride a gear over lava.

WTF The maze of doom.

Momentum is the name of the game in Io, which puts players in control of a small gyroscopically-powered ball and tasks them with exploring over two hundred challenge rooms set inside a starry void. The developers are dedicated, almost to a fault, to realistically depicting the effects of Newton’s first law — players will spend the entire game managing inertia as they shoot through loops, leap over lava, and rocket across the sky, praying that they’ve aimed their arc just right.

The player controls a white ball that rolls along blue platforms towards green portals — and that’s as complex as the visuals get, because this isn’t a game about spectacle, it’s about learning to make the most out of the ball. It’s a special one with the ability to shrink and grow, changing both its size and weight incredibly quickly. This has basic applications like reducing in size to dart through a hole or growing to roll up a staircase, but it also has far more complex ones.

This is where momentum comes into play — every size of ball takes the same amount of time to rotate once. It then follows that larger balls move faster but also weigh more, meaning they can’t fly as far or climb slopes quickly. Thus, the key to success in the game is managing transformations. The ball keeps all of its kinetic energy as it transforms, and the force it takes to move a large ball will have a much greater effect on a smaller one. 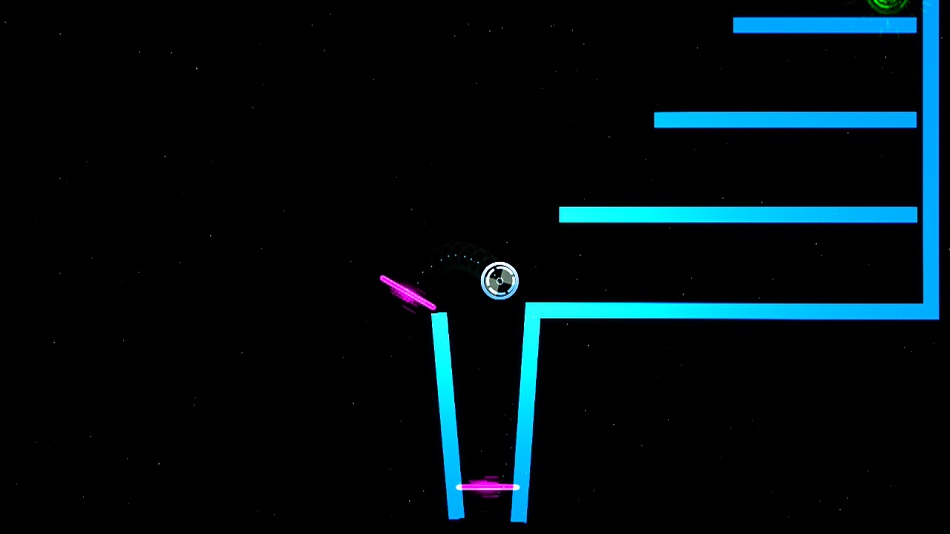 At first Io asks players to do simple things like gather speed as a bowling-ball sized object and then shrink into a golf ball to go flying through the air, but things soon ramp up. Players will have to manage levitating platforms, powerful air channels, and even gears that have to be balanced on unicycles. Across its 200+ levels, Io consistently manages to mix things up and finds fascinating new twists on its formula, constantly challenging players to up their game a little at a time, learning new tricks and techniques to get the most out of their transformations.

Perhaps the game’s best feature is how open it is. Io doesn’t lock away any of its content — unlike most puzzlers, there’s no threshold of success required to play any of the levels, and players are free to try any level at any time. Having trouble with a particular challenge? Move on to the next one. Or, just jump twenty puzzles ahead. Io won’t judge.

The game isn’t without flaws, though. The training mode is a little on the sparse side, not fully explaining a few of the tricks that players will need to master. For example, no matter how many times I restarted, I could never quite grasp the technique for climbing straight up sheer walls. I also skipped any number of levels because I’m flat-out terrible at the balancing sections. While I won’t fault the game for being too difficult, I will suggest that its training could have been more comprehensive and robust.

Io‘s camera zooms out as the ball enlarges, and zooms in as it shrinks. Players look at an overview of the level, plan out their move, and start rolling. Then, at a key moment, they shrink the ball down and the camera pulls in tight. Suddenly the whole world is zipping past and all situational awareness disappears, with players forced to hold their breath and hope that they’ve timed their transformation correctly. Io is a faster, more nimble puzzle game than I’m used to, and when it works, there’s nothing else quite like it. Luckily, it works more often than not. Rating: 7.5 out of 10

Disclosures: This game is developed and published by Gamious. It is currently available on PC and PS4. This copy of the game was obtained via publisher and reviewed on the PS4. Approximately 4 hours of play were devoted to the single-player mode, and most of the levels were completed. There are no multiplayer modes.

Parents: According to the ESRB, this game is rated E and contains nothing objectionable. It’s a game about rolling a ball over platforms in front of a starfield. It’s fine.

Deaf & Hard of Hearing Gamers: There are no audio cues.

Remappable Controls: No, this game’s controls are not remappable, and the game is controlled solely with the Dualshock 4’s two thumbsticks.