Remembering that yesterday was S-Day (the day Calibites celebrate the release of a new Soul Calibur title), I headed down to the store to pick up a copy. While I'm not a full-on Calibite, I don't own action figures or costumes or anything like that, I'm enough of a Soul Calibur fan that I'm generally happy to see a new game in the series coming out.

I was especially excited about this Soul Calibur, though, since I'd heard that it was going to be featuring playable characters from Star Wars. Usually my policy of not reading previews or seeing ads serves me well, as I'm able to go into games with few preconceptions and engage them on their own terms.

Sadly, my habit has failed me this time around, since, had I read previews, I would have discovered that the game I was interested in playing, pictured here: 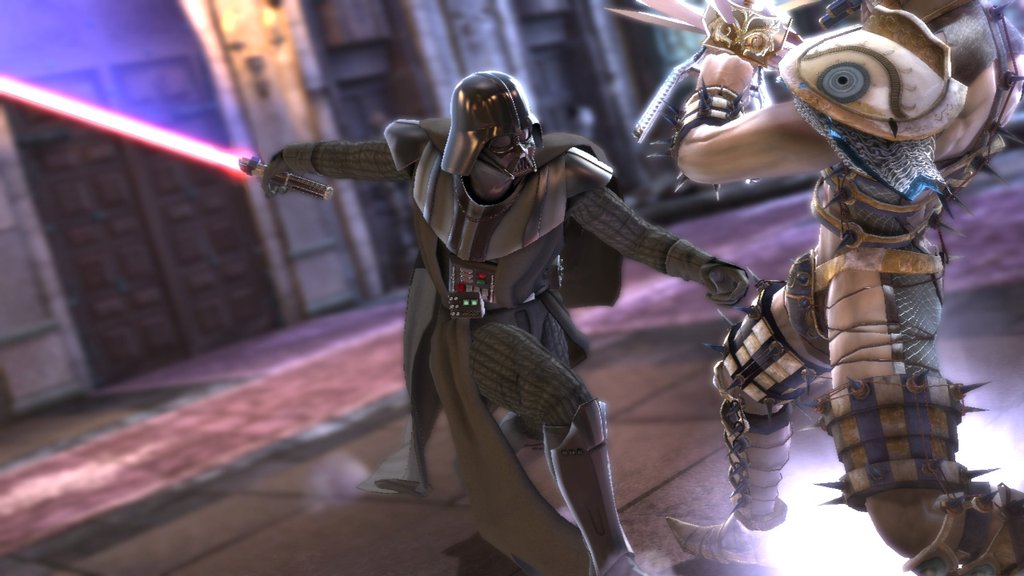 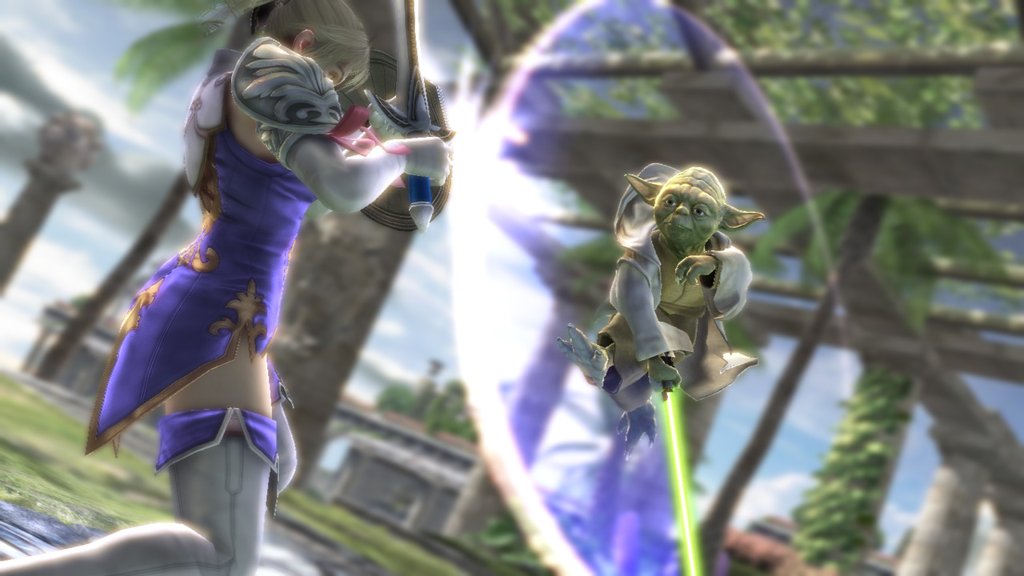 No, your eyes aren't deceiving you, that's Yoda, leaping into the air like a jackass, swinging a lightsaber. Oy.

Look, it's been a couple of years since George Lucas destroyed Star Wars, and I understand the natural human desire to go back and try to eke out the tiny portions of good left in that franchise. One of those little bits of good is the character of Darth Vader, who has such a great look and persona that it makes perfect sense to continue leveraging him for every bit of awesomness he offers.

By comparison, swordfighting Yoda was perhaps the stupidest single sequence from a movie that was little more than an abomination on the face of film history. It was a fairly large mistake to think that the audience wanted to see Yoda swordfight at all (he's a powerful enough Jedi that, like the Emperor, he's past the whole need to fight people with lightsabers – the Emporer's fight from Sith was nearly as stupid), but a far more ridiculous mistake was to render his fighting style as a blurry little green ball bouncing randomly around the screen.

So this explains my frustration at discovering that Darth Vader was an exclusive character featured only on the PS3, while we Xbox 360 users would be stuck with the hopping emerald monstrosity.

As a reward for my loyalty to Microsoft, I've been given the chance to be depressed. Thanks, MS – Soul Calibur 4 just went from a purchase to a rental.

Oh, and there's another bonus character, the main character from Force Unleashed. I can't imagine which I'm supposed to be more excited about – the worst idea for a fighting game character in recent memory, or a character from a game that hasn't come out yet, and that, therefore, no one can possibly have a positive emotional connection to.

Hi Capi, thanks for the comments.

Just to clarify though, this piece is a blog post and not an actual review.

gamecritics.com is probably the best resource for videogame reviews. can’t think of any site that comes close to this one. however, i wasn’t expecting a star-wars-fanboy-based review on soul calibur. i wanted to read all about gameplay, plot and technical omg-ness. some of the best articles i read here tackles just one quality of the game, and explores it wonderfully. whether star wars or other promotional characters break the narrative in games, or twists it in ways most media wouldn’t allow, is something i expected to read. how lightsaber-fighting-and-jumping yoda stinks because he was the coolest guy in star wars… Read more »

Well isn’t it obvious that including Star Wars characters is marketing cross-promotion for the Force Unleashed game.

And forcing people who own several consoles to buy multiple copies of the same game.

The game developers do not care about adding characters to improve the game, it is purely marketing. As if they really thought Darth Vader was a wise creative choice that would add flavour to the Soul Calibur experience.

And sadly, in the end they will sell a gazillion copies because of all the Star War nerds buying this game.

I say don’t let Yoda ruin it for you. Take it as a whole, SC IV is probably the ONLY weapon based decent weapon fighting game out there. When I purchased Soul Calibur 2 I hated the guest characters, but I simply pretended that they didn’t exist and had fun with the game. I’m planning to do that same with IV.

While I enjoyed the fact that Soul Calibur II had different characters representing each format (bar Spawn on the X-Box — though I still felt he was a cool character) I do agree that the Star Wars stuff in SCIV is a bit stupid. It might be unfair to judge the game purely because of the inclusion of Yoda/Vader/Apprentice, but actually, having played the game myself and seeing general comments, it would appear that – not only are the characters there just to boost sales – they’re not implemented too well at all. For one thing, Yoda cannot be grabbed… Read more »

While I won’t be picking up either version, I just wanted to comment on how stupid exclusive characters are. They’re stupid. Why wouldn’t all three “secret” characters be available for both versions? It just makes little to no sense. I don’t know if this started with Soul Calibur 2, but it’s a ridiculous concept. I understand the reasoning then, Link was a Nintendo franchise, but don’t understand why they didn’t just tell the other people to shove it. If you wanted a “secret” character go buy the GameCube version (which coincidentally people did anyways). Maybe that’s what they should have… Read more »

Ouch… this is definitely one time when reading previews would have paid off. don’t completely give up hope, though… i’ve heard talk that the character not included in each version may be available as an add-on (for a fee, of course) a little later down the road. I’m not as much of an SC fan as i used to be so i planned on waiting… if the rumor proves true, i’ll get the 360 version (for Live and Achievements) and then download Vader. if the rumor is just wishful thinking, then i’ll go with the PS3 version for basically the… Read more »