While I never read previews, it's rare that I make it through a week without checking on The Magic Box a few times. As a result, 99 percent of my information about upcoming games from a few isolated screenshots, often blurry scans from Japanese magazines.

Most of the time, I don't draw anything but the broadest conclusions about a game from these pictures, but today I came across shots so bewildering that I found myself compelled to share them with you, the person reading this blog post.

I present Splatterhouse 2009: The Screenshots, and the snarky comments that accompany them. 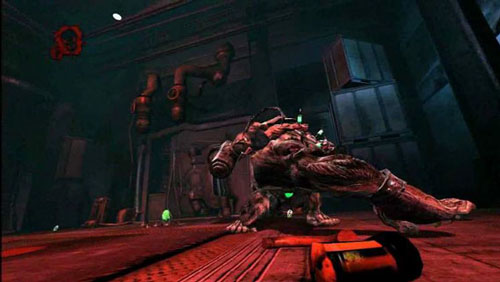 Oh good, it's a generic monster with grey skin and tubes sticking out of his back. Because that went so famously well in The Suffering, Van Helsing, and Resistance. 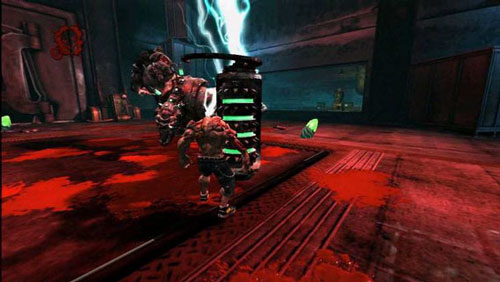 Big metal doors, green crystals, and arcing electricity generators. If it weren't for the blood splattered over the ground, this could be the ‘mad scientist' level from a Crash Bandicoot game. 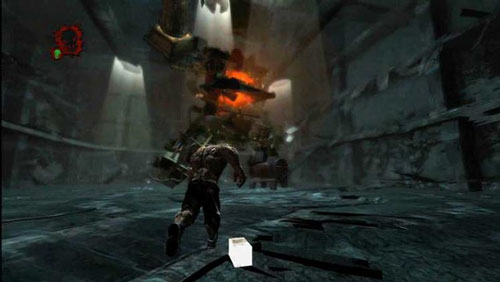 If I'm not mistaken, that's Rick from Splatterhouse being attacked by a giant clockwork machine, or possible a mass of fixtures and furniture that have been bulled together by a poltergeist into the form of a big stompy guy.

If that's the case, I'm doubly upset, because Splatterhouse featured one of the great bosses in videogame history—a poltergeist that attacked you with a ROOM. 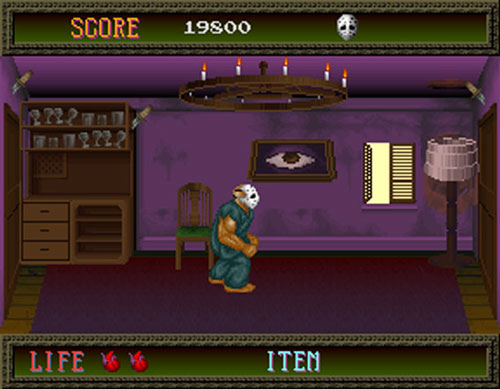 It's creative, unexpected, and horror-themed. Being attacked by a giant metal thing at the end of a level in a 3-D beat-em-up is none of those things. 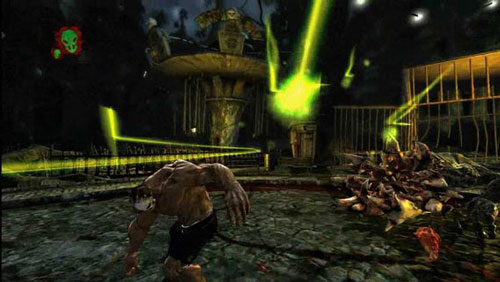 I have no idea what's going on in this picture, but between the jagged spikes, green flowing energy, and goofy-looking skull-themed (Health? Rage?) bar, I'm getting a serious Evil Dead-game vibe. Which is one of the worst vibes you can get. 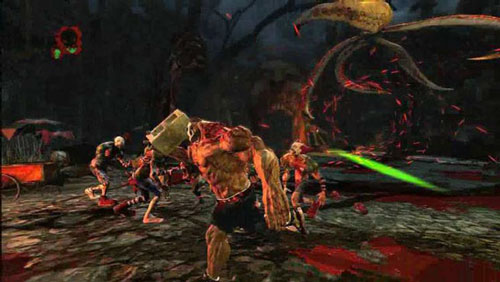 Now that I've seen a little more from that previous level, I realize that Rick is likely running around some kind of Mutated Zoo. There's that sinking Evil Dead feeling again. Also, Rick is about to throw a cinder block. I can't express how wrong that seems without starting to cry a little, so I won't try. On the upside, the game seems to be going a little more H.P. Lovecraft-y this time around, as it features a monster made entirely out of broad, flat, tentacles.

The original Splatterhouse games were set in contained, thematically perfect locations. Splatterhouse opened with a couple fleeing a horrible rainstorm within the walls of Herbert West's house. Splatterhouse 2 sent Rick and his terror mask looking for answers in the islands retreat of one of West's collaborators, a doctor Mueller. Then Splatterhouse 3 took place entirely within a single expansive mansion.

Obviously, there's a theme here. Houses full of monsters at night. So let's see how this new game rolls. 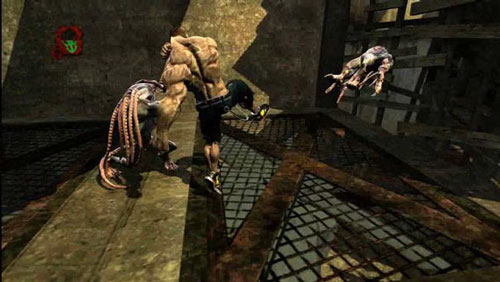 Why is it daytime? Has no one told them that horror can't exist in daytime? 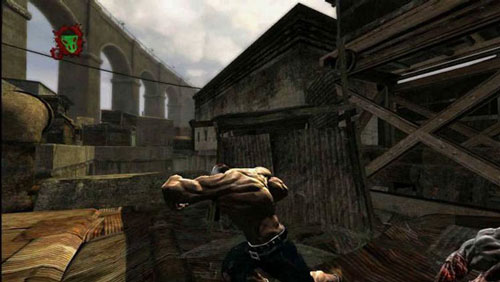 Why is Rick outside? Wait… is that a freeway in the background. Oh my god this looks terrible. 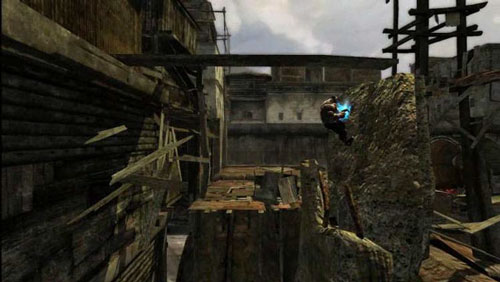 Yes, that's Rick climbing a wall. Because the Splatterhouse series was just screaming for the addition of platforming elements. 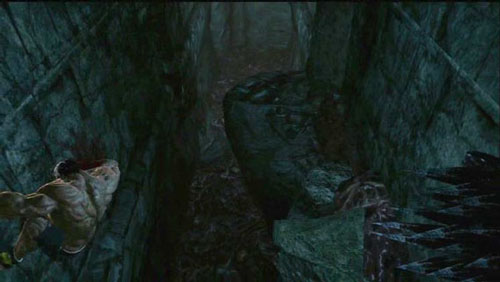 If you run along that wall, Rick, I swear to god… 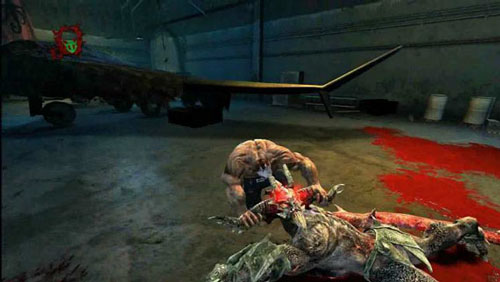 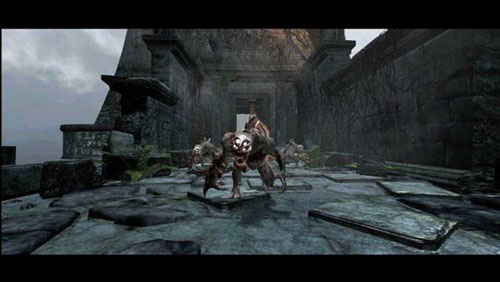 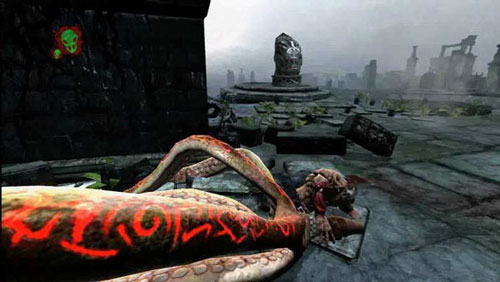 And now we've moved into rejected levels from the game Rise of the Kasai. We also get a better look at the tentacle beast. In a stunning example of evolutionary adaptation, it seems to have developed markings that resemble glowing eldritch symbols, perhaps in the hopes of frightening off superstitious predators. 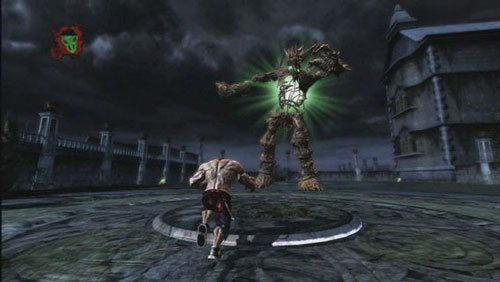 Another of the game's giant bosses. The series has always enjoyed its film references, so it's not surprising that the trend would continue into this episode. Referencing 1973's The Wicker Man seems like an odd choice.

Hold on another second… was that a chain attached to Rick's hip? 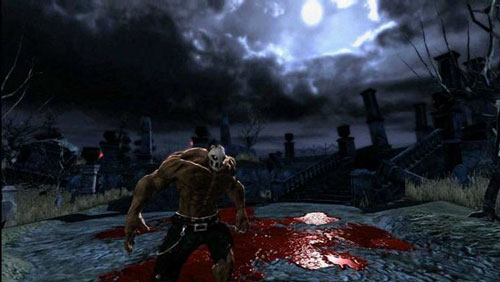 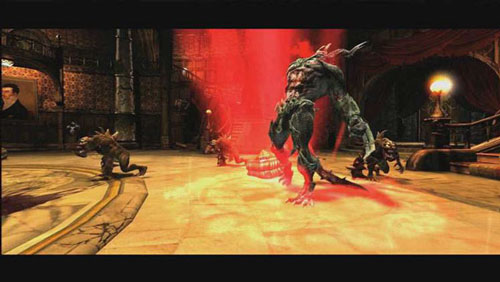 How are these horned demons acceptable from a Splatterhouse game? I know it's been twenty years and the monsters are a little on the pixelated side, but take a look at these guys: 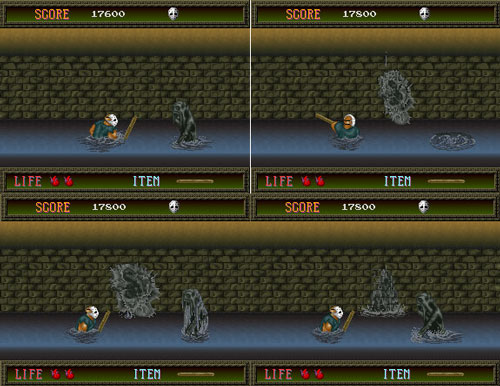 That guy is made of water. When you hit him with a board he flies against the wall, splashes into nothingness, and the water runs down the wall. 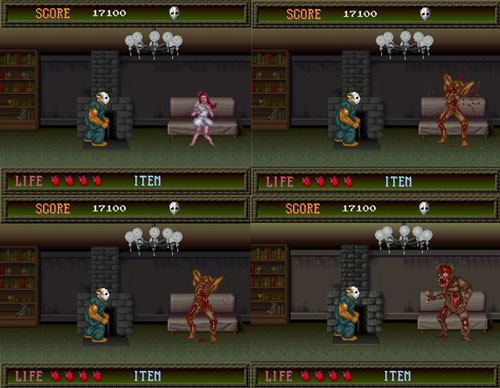 This is the process of Rick's girlfriend Jennifer turning into a saggy, torn-fleshed monstrosity with hideous claws. 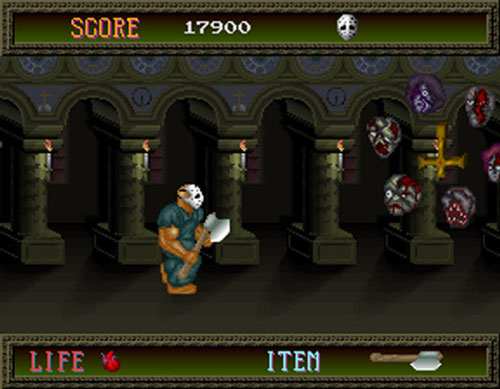 While not very visually impressive, I've always like Inverto, the inverted cross with the severed head entourage. 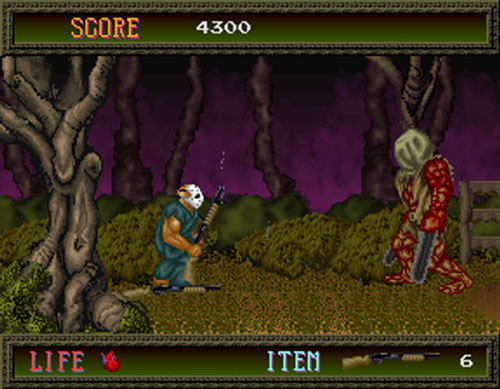 And, of course, there's the Biggie Man. The unofficial mascot of the series, Capcom has appropriated (stolen) him for two Resident Evil games in a row.

Now here's plenty of shots of Rick attacking and being attacked by hordes of zombies. 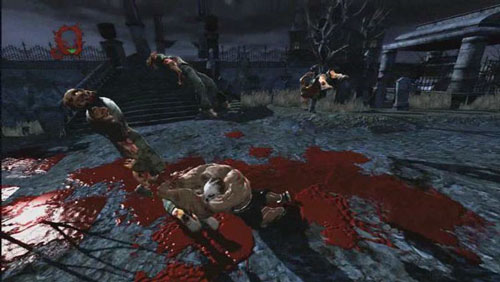 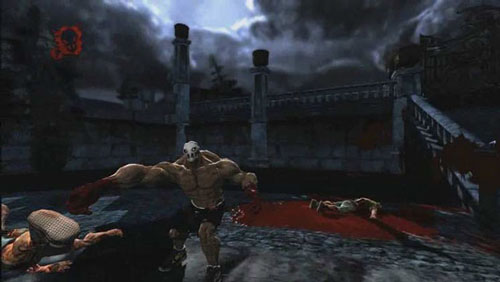 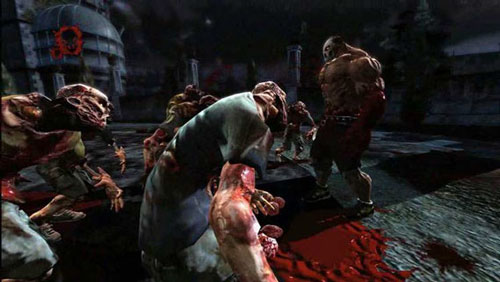 Notice anything odd in those pictures? I'll give you a hint. It's not the bland repetitiveness of the monsters and the areas where they're being fought.

It's the distinct lack of splatter featured in them. Where are the severed heads, the exploding torsos, the spines rent in two? I see blood spilled all over the floor, but I'm not sure where it's coming from.

Yes, these are just mid-development pics, but if you're making a Splatterhouse game, shouldn't we see some images that are representative of the splattering we should get to perform in the game?

When I think of Splatterhouse, do you know what the first thing I think of is? 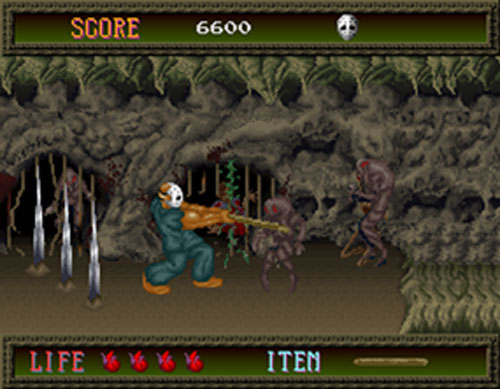 Hitting that zombie with a plank. 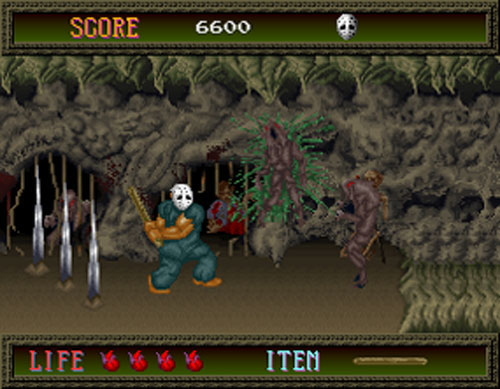 Then watching that zombie explode as he slams into a wall.

Know what I see in these pictures? 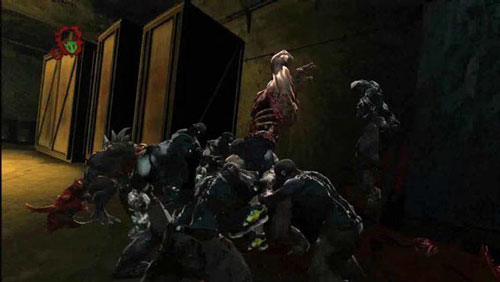 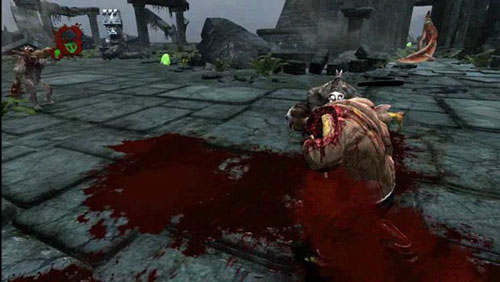 I see Rick getting torn apart. Missing an arm and a chunk of his shoulder, having his ribcage exposed. I'm going to take a wild guess and assume that the developers have come up with a new health system that indicates damage by visibly tearing pieces off of the model.

This is all well and good, but I don't come to a Splatterhouse game to see Rick get torn apart. I come to Splatterhouse to see him tearing the monsters to pieces. And I'm not seeing that in any of these images.

Maybe Splatterhouse will turn out just fine, but given these lacklustre images, my hopes aren't all that high.

(Note – This post was written quickly while looking at the original images—during my search for classic Splatterhouse images, I discovered that the developers of this game, Bottle Rocket, actually were the people behind Rise of the Kasai. This explains a lot. Although given their pedigree, I would have expected that at least one severed head might have shown up in the screenshots)

(Note 2 – I made a joke about evolutionary camouflage earlier, and it reminded me that the first Splatterhouse featured one of my favorite examples of that ever: 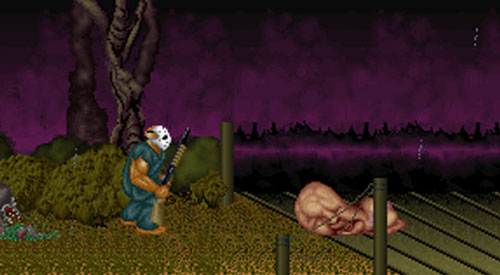 Looks like an ordinary every day giant fetus, doesn't it? 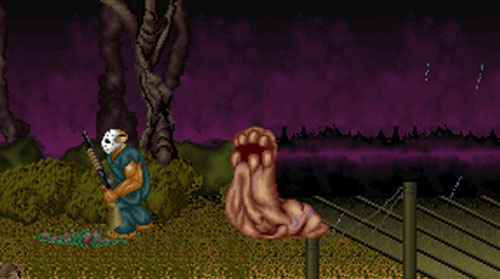 … but Namco confirmed that they took the project away from BottleRocket, a month or so before it was to go gold.