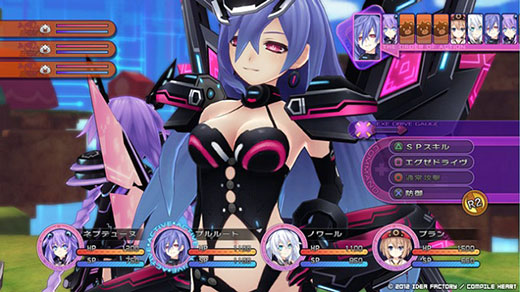 HIGH The finale video taking the characters through a brief history of video games.

LOW Stumbling without warning into one (of many) dungeons full of one-hit-kill enemies.

WTF The bonus condition requiring characters to walk 1/8th the circumference of the earth.

By the third trip into the world of Gamindustri, the dimension where major consoles and a few key game developers are represented by fighting girls, a formula has been well established: New villains appear to threaten the status quo, and a group of consoles learn to be friends and work together in opposing them.

At first it seems that Hyperdimension Neptunia Victory

is going to have a problem following that storyline, since basically all interpersonal conflict (beyond the endless conversations about bust size) had been resolved in the previous games. The game even winks at that issue by opening with a parody of the prologue fight from the first in the series.

The developers find a way around their contented main characters by quickly shifting the game's action into a parallel dimension that resembles Gamindustri during the initial rise of the four major console nations. This brilliant plotting allows the game to give fans of the series a window in to the series' backstory without resorting to a time travel storyline or wasting everyone's time by making a prequel.

As I once again took Neptune (Sega's Avatar in Gamindustri) on a journey to retain her lost position, I was pleased to discover that the series' writing is as sharp as ever.

One of the cleverest comedy JRPGs I've encountered, Victory offers not only an interesting plot and good jokes, but legitimately well-drawn characters. All of the alternate-reality versions of the previous cast manage interesting twists on their original identities, while remaining familiar enough to satisfy their existing fans. The new heroes and villians are treated equally well, all of them entertaining characters, from a parody of one company's flagship creature to an android who uses its status as an artificial being to challenge the simplistic concept of gender. Even my biggest question left over from the first game (Is villain Arfoire meant to represent the failed nation-state of Atari?) gets a definitive answer here, allowing the game's story to come to a satisfying conclusion.

…Not that the conclusion is the easiest thing to come by.

As is popular with JRPGs, Victory has a number of different endings, and the means by which they're unlocked can prove frustratingly obtuse. There are no obvious cues letting players know when missable 'special events' are occurring, so it's easy to blow past them on the main quest and wind up trapped in the alternate dimension forever.

The new 'Scout system', in which players hire a series of adorable creatures to search for new dungeons helps a little, by at least sectioning off a menu that's solely devoted to finding secrets. Even with the help, however, the game can be incredibly frustrating – at one point I was tasked with increasing my jumping height to reach a previously impassable area, but the only way to craft the necessary item was to find a component dropped by a monster that only appears when scouts have been assigned to a particular area, and that area's flag has been set a particular way.

If that last sentence was confusing to read, imagine how difficult it was to play. At various points Victory requires players who want to beat it with the best ending to either extensively consult help guides or essentially make their own, listing which items are dropped by which monsters, and when.

The combat is in line with the rest of the series – heroines attack with pre-programmed combos or special moves that drain their mana. A new development lets the player move their characters around the field, allowing certain attacks with wide or long hit zones to strike multiple opponents at once. It's not as interesting or well-implemented as Mugen Souls' 'billiards' system, but it adds welcome depth to the combat. One major drawback is that since there's no way to discover what the enemies' attack areas are, it's impossible to use the positioning system defensively.

Victory's monsters are very well-designed, but will seem familiar to anyone who regularly plays Nippon Ichi games. Once again, reused assets abound.

The game's dungeons are a mixed bag – the generic hallways leading to square rooms have been replaced by a variety of lavishly large and irregularly-shaped environments. The drawback is that there are far more dungeons than there are unique environments. In previous games, the simplistic dungeons let the developers get away with simply rearranging the hallways and rooms without breaking suspension of disbelief. Victory's large, detailed, asymmetrical areas dazzle the first time they're seen, but as the exact same rooms connected in the exact same way show up time and again, they grow tiresome. Changing whether players enter from the North or South can't cover for the fact that they're walking through an identical cave for the fifth time.

Those minor things aside, the game's one major misstep is the attempt to bring in metagame elements, such as a bonus structure that rewards the player for achievements within the game — things like having a certain character get hit or be healed a specific number of times and one of their stats will get a boost. It's a great idea in theory, but the execution is a disaster.

The various challenges have eight tiers each, and only the final tier offers a worthwhile reward. Sadly, each of those final tiers is basically impossible to get to with absurd requirements like pressing the 'search for hidden items' button thousands of times, hitting enemies twenty thousand times, leaving the game turned on while doing nothing for six hours, or walking five megameters.

I completed the game multiple times and none of my characters got anywhere near the top items on the lists. It's obviously an optional component to the game – players aren't forced to pursue any of these challenges, but to fill a JRPG with challenges that can't be completed borders on sadistic.

does its series proud. What started out as a fairly broad satire of the game industry has grown its own world of loveable heroes and villains whose continuing adventures could easily inspire more adventures for years to come. More importantly, being three games into the franchise hasn't dulled its satirical edge and willingness to call out bad industry practices. Unfortunate gameplay decisions here and there can't keep this from being an enjoyable gem of a JRPG. Rating: 7.5 out of 10

Disclosures: This game was obtained via publisher and reviewed on the PS3. Approximately 150 hours of play was devoted to single-player modes (completed 3 times).

Parents: According to the ESRB, this game contains comic mischief, fantasy violence, language, partial nudity, sexual themes. You should consider this one long and hard before handing it off to their children. It's bright and colourful, but don't be decieved – the subject matter involves kidnapped children, brainwashing, and attempted genocide. But it all turns out happy in the end! While a lot of the jokes are on the prurient side, and almost all of the main characters wear scandalously revealing clothes, the more borderline creepiness of the second game in the series has been removed. The violence is all cartoony and fake, and there's no drinking or drug references to worry about.

Deaf & Hard of Hearing: You won't have any trouble at all. There are no audio cues, and most of the communication in the game is made solely through text, so there's no chance of missing out on any story information.