The Console Wars Get Literal 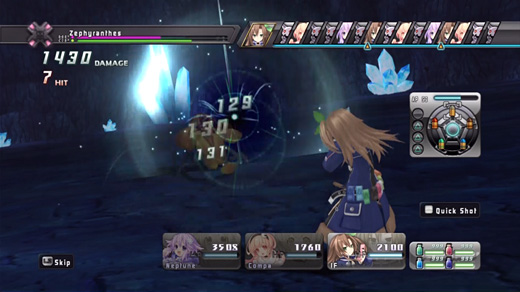 LOW Waiting for a minute for my hammer to recharge.

WTF Seeing the bruised heroine treated with "bondages" (not a typo!)

This game represents one of the best parts of being a video game critic to me—I have no illusions about my powers as a video game critic, tastemakers do not hang on every word, developers do not cringe and pray I miss some glaring error they left in the game, and publishers don't quake in fear at the prospect of a precipitous drop in sales that will follow a pan. I'm just here to offer some thoughts on a game from an experienced eye—the goal is simply to raise the level of discourse around a game. Nevertheless, when a game's developers make a sequel or follow-up that addresses every issue that I had with the previous title, I can't help but feel a little proud, whether or not they read my review.

…And let's face it, they didn't. They're in Japan.

is a Japanese role-playing game (JRPG) set within a metaphorical representation of the video game industry. The main character, Neptune, is a thinly-veiled avatar for Sega. As the game begins she's been tossed out of the pantheon of Console Protection Units, which is a fancy way of saying Anime Battle Girls who represent the big three (formerly four) console manufacturers. So, it's up to Neptune to regain her memory, get her powers back, and battle the evil force that has turned all the console goddesses against one another by crawling through repetitive dungeons and level-grinding monsters.

While not an official sequel to Trinity: Universe, HDN reuses so many assets that it's impossible not to compare the two. For example, there were few monster models running around this game that I hadn't already encountered—in one egregious example, each dungeon's 'bonus monster' is exactly the same monster every single time. Yes, the difficulty and reward will increase over the course of the game, but its appearance never does. Other than the overly familiar monsters, however, HDN compares well to its predecessor. The needlessly complicated item crafting system has been removed, leaving the player to concern themselves with nothing more than gathering enough money to buy better swords and deciding which armor layout best suits their combat style.

Perhaps to compensate for the lack of gameplay other than combat (more on that below) the turn=based fighting system offers a surprising amount of depth and customizablility. 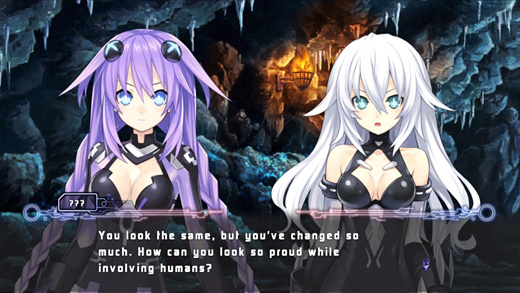 Attacking is done in four-move combos, which can be chained together provided certain moves are used. As new, more powerful techniques are unlocked, the player can assemble them into any combination they wish, so long as they have enough action points available to pull the moves off. However, a bizarre design decision holds the combat back; in addition to losing AP every time the player performs a move, during the active character's turn the number constantly counts down, acting as a clock which demands quick action. This is all well and good, except that the numbers continue shrinking even after the button has been pressed and the move animation is being executed. In practice, this means that in order to deal the maximum amount of damage, the player will be forced to constantly tap the 'skip animation' button. Simply turning off the animations is, bafflingly, not an option offered by the game.

The game's adventure sections have issues as well.

Everything, from plot advancement to choosing which dungeon to explore, is accomplished by simply picking different items from a menu and then watching a short conversation between the characters and hearing an event described before entering a dungeon. The dungeons themselves would be painless enough if it weren't for the developers deciding to add the illusion of depth by giving each main character their own ability—breaking walls, summoning monsters, locating treasure—forcing the player to constantly switch between them, rather than just having a single avatar doing everything like in Trinity Universe. It's bad enough that switching characters means standing still for five seconds, but giving all of the abilities' extended cooldown periods is just ridiculous. If more than one breakable wall needs to be broken in quick succession—not an uncommon occurrence—the player will have to stand still for a minute, waiting for the game to allow them to once again swing a hammer.

While the core gameplay falters and stumbles at points, Hyperdimension Neptunia is saved by the high quality of its comedic writing.

As the plot winds its way through the various islands where the four consoles are worshiped, no opportunity is passed up to take a dig at the big three hardware manufacturers. Whether it's Sony's cold obsession with technical excellence, Nintendo's immaturity, or Microsoft's seemingly disinterested entry into the Japanese console market, no one gets off without a humorous scolding. Even if the game's dungeons get a little tedious from time to time it's forgivable because the player is never too far from another incisive jab at popular franchises from other developers. While the characters are never named for copyright reasons, they're all represented with instantly-recognizable silhouettes to ensure that the jokes land.

's take on the JRPG doesn't break any new ground, it's certainly a step in the right direction for the developers. More accessible than Trinity: Universe while maintaining and expanding on that game's witty style, HDN is another perfect title for anyone looking for an easy entry to the genre, or really anyone who appreciates some laugh-out-loud comedy with their RPGing. Rating: 7.5 out of 10.


Disclosures: This game was obtained via publisher and reviewed on the PS3. Approximately 100 hours of play was devoted to single-player modes (completed 1 time).

Parents: According to the ESRB, this game contains comic mischief, fantasy violence, language, partial nudity, sexual themes. You shouldn't have to worry too much about handing this one off to your teens. While the jokes are relatively prurient, and endless humour is gathered from the differing sizes of the characters' breasts, for the most part the game's content falls under the category of harmless fun. So long as you don't mind the comedy being a little on the racy side, there's nothing else even mildly objectionable.

Deaf & Hard of Hearing: You won't have any trouble at all. There are no audio cues, and most of the communication in the game is made solely through text, so there's no chance of missing out on any story information.

Great review. I’ve had a passing interest in this game, I’ll have to try it out.