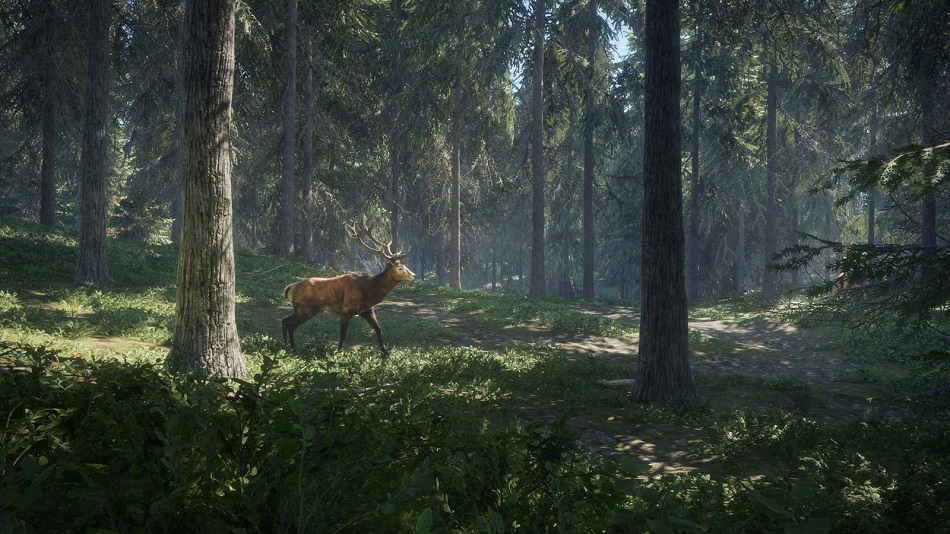 HIGH Finally tracking down a black bear on a moonless night.

LOW Being forced to hunt rabbits – again – to unlock the next level.

WTF How am I supposed to tell which of these sheep is legendarily formidable? They’re just sheep!

It’s nice when a title serves as a statement of purpose. There are no frills here, no fancy setup or elaborate narrative. The game simply wants to simulate hunting. So, how good a job does it do from the viewpoint of someone like me, who knows absolutely nothing about hunting?

Hunting Simulator allows players to explore more than a dozen enormous maps across a hundred missions, crawling through deserts, hiking up hillsides, and creeping through brush in the hopes of sighting and shooting their intended targets. Players can move around and explore in either first- or third-person perspective, then use rifle scopes once prey has been spotted. Fundamentally, the gameplay isn’t so different from a stealth/sniper title. The goal is to move carefully and deliberately through an area without being spotted, and then get a clean vital shot. The fact that I’m attempting to shoot a deer in the heart rather than a Nazi in eye doesn’t have that much of an effect on the mechanics.

From that mechanical point of view, this is a fairly forgiving simulation. Players don’t have to bother with wind speed or bullet drop – once a target has been sighted it’s a simple matter of point and shoot. Far more in-depth are the stalking mechanics, which reach a level of detail for which I was completely unprepared. Every animal can become aware of the player based on smell, sight, and hearing. Target an enemy and three bars appear on the screen, which gradually fill as any of the sense are triggered. If any of the lines fill up, the animal will spook and run for it. Avoid this — even with slow motion aiming in effect, a running animal is far harder to hit than a still one.

Each animal has unique abilities, and must be approached with different strategies. Wolves and bears, for example, have incredible smell, so players can use a puff of powder to determine wind direction and and then circle around to attack from downwind. Other animals have such keen hearing that players will have to slow-crawl to a good vantage point if they want a chance at a decent shot. While the shooting gameplay may be nothing special, the stalking is impressively designed, and does a great job of making players feel like they’re working hard to earn their shot opportunities.

However, there is one problem with the stalking mechanic, which keeps it from feeling like a truly effective simulation – the way the game handles tracking. 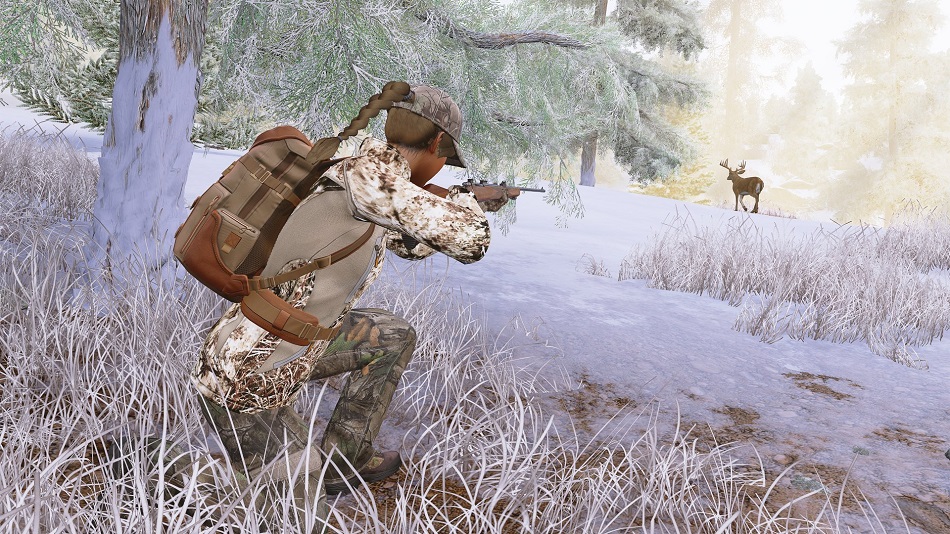 Each hunt starts with the player being told about a general area they might be able to find traces of the animal they’re searching for. Once they’ve found a track, they can analyze that and see an illuminated set of tracks letting them know what direction the animal was traveling, and how long ago the tracks were left. This information places a circle on the map, letting players know roughly where the animal can be found, and finding subsequent tracks will update that circle accordingly. That all sounds good, but all tracks are placed there artificially. In this game, animals do not leave tracks in real time.

For example, if I shoot an elk and only injure it, it’ll make a run for it. While it’s running, it doesn’t leave any marks on the ground whatsoever, making it impossible to track. If it happens to die, a marker will appear on my map. If it doesn’t die, it essentially ceases to exist once it’s out of my sight.

If my shooting makes animals run away, I don’t have the option of following them — all a player can do is wander around the map, hoping to find a new set of tracks leading to some freshly-spawned animals, and this lack of a proper tracking mechanic is the game’s biggest problem by far. This omission seems especially strange when one considers that the player character leaves footprints wherever they go. Would it really be so hard for the animals to do the same? Other non-simulator games have managed it, why is that feature not here?

The only other real flaw to Hunting Simulator is its puzzling unlock system. The game offers a wide assortment of maps, each with its own set of exclusive animals, but it only lets players take them on one at a time. I understand wanting to make the player sample every area before moving on to the next one, but forcing them to complete every single hunt before letting them see the next location is oddly frustrating. Also, the weapon unlocks are a complete mystery – players can see a list of guns an equipment that they’ll eventually gain access to, but there’s no criteria for how to unlock them. These two odd choices combined to create a great deal of frustration in the first two maps, in which I was expected to hunt down rabbits and birds nearly ten different times all before I finally unlocked a shotgun – the best weapon for doing that – on the third map.

So, how well does Hunting Simulator simulate hunting? I can’t speak to its verisimilitude, but as a game, this is a solid animal-stalking experience which has its best parts undercut by a frustrating menu system and unrealistic tracking mechanic. The shooting, simple though it may be, is satisfying, and there’s definitely a worthwhile amount of challenge to be found in carefully sneaking up on prey. This is a good hunting game, but these technical issues keep it from being a great one. Rating: 6.5 out of 10

Parents: According to the ESRB, this game is rated T and contains Blood and Violence. It’s a hunting game, what did you expect? This is filled with imagery of adorable animals being shot and killed, with bullet-cams lovingly depicting the flight of projectiles into the flesh of the unsuspecting prey. There’s none of the Sniper Elite borderline pornographic X-Ray damage cameras, but it definitely has the potential to upset even younger teens.

Deaf & Hard of Hearing Gamers: While listening for animal calls is a key gameplay mechanic, there are visual cues to help impart that information as well. All instructions are offered through text, although the text is not resizable. This is fully accessible. 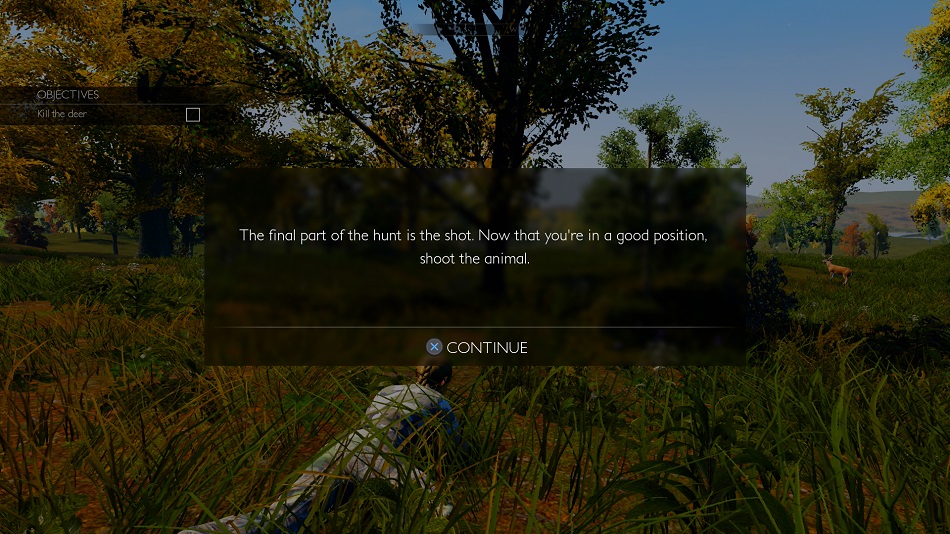 Remappable Controls: No, this game’s controls are not remappable. there is no controller diagram. The player controls their hunter with the left thumbstick, the camera with the right. The shoulder buttons handle aiming, shooting, and switching camera modes. Face buttons handle pose changes, reloading, and item use. The touchpad opens the map.