A Flashlight on Past Sins 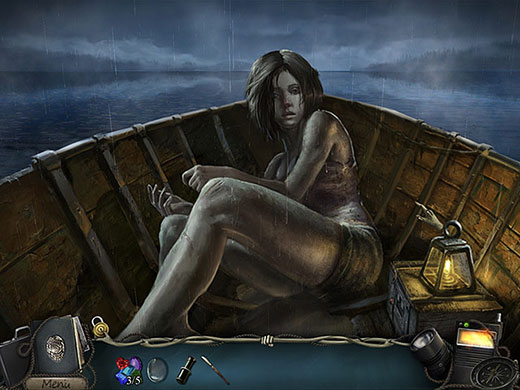 HIGH Finally reeling in that boat and getting back to the title screen.

LOW It's over? That was abrupt.

WTF Seriously, what happened to (spoiler)? I need to know.

Right from the title screen which features a half-naked woman suffering from exposure in a rowboat on a rainy night, Hope Lake is determined to appear darker and more sinister than the average HOG. Horror is a ubiquitous subject within the genre, and there are countless examples of games set in crumbling hospitals, churches, and madhouses, but Hope Lake wants to evoke an entirely different brand of horror.

By focusing the player's attention not on a scary beast or sinister edifice, but the plight of a kidnapping victim, the developers make it clear that they want to play on more grounded, everyday fears. While the game never manages to be as gripping an exploration of terror as the title screen implies, the change of pace it offers is both welcome and enthralling.

Not in the least. By setting the game in and around the grounds of a long-shuttered boarding school where a psychopath has taken residence, the developers have found the perfect setting for piles of refuse and random objects to be scattered. Whether it was the abandoned infirmary filled with a variety of rusted tools and machines, or the dusty attic stacked with decades of stored possessions, I never once questioned the contents of a HOG screen, as bizarre and random as they might have become.

Playing as private detective Kelly Wells, the player is given every logical reason to scour rooms for clues and useful items. Yes, the game uses the standard device of demanding the player find a dozen more items than they actually need, but the game manages to keep the screens fresh with multipart solutions to finding items, and well-drawn locations in which the items are believably hidden.

More importantly, the key items the player finds have a tendency to stick around in the inventory for a little while rather than perishing immediately after being used to remove an obstacle. It's a minor step, but just acknowledging that the player may be able to find more than one use for an axe goes a long way towards making the game feel more practical and realistic.

Hope Lake is interested in telling a dark, intense story about hidden sins and the drive for vengeance by carefully crafting the HOG screens and puzzles to maintain the tone throughout the game. Even if the creation of some puzzles seems beyond the ability or interest of the villain, they always serve the larger purpose of reinforcing the game's eeriness. Artistically speaking, this is an unusually accomplished and consistent entry in the HOG genre.

Even the game's story gets high marks for most of its running time. From a propulsive opening sequence that uses a few brief animated scenes to establish the stakes, the player is thrown headlong into the mystery and given every reason to believe something terrible is going to happen if they don't solve it fast. Every step of the way there's a new discovery waiting for Kelly, and some new bit of the evidence or piece of backstory to give more insight into the villain's motives and plan.

Things only get a little troubling right at the end, which happens incredibly abruptly. After an entire game devoted to building up the villain and his insane scheme, the story gets wrapped up with just a few bits of dialogue. It's certainly not the satisfying resolution the game seemed to be promising, and the details are so threadbare that the fate of several missing characters goes completely unexplained. There are hints in the game pointing to a certain interpretation of events, and it's possible to leave Hope Lake assuming a resolution the game doesn't provide, but those same hints also point to a grand climax that the game skips over. Honestly, I'm left not knowing exactly what to think about the finale.

Other than the story problems, Hope Lake is top-notch with gorgeous art and well-constructed puzzles to overcome. As HOGs go, Hope Lake is as creepy and intense as they come. It's only too bad the lack of a satisfying story resolution keeps it from true greatness. Rating: 8.5 out of 10


Disclosures: This game was obtained via paid download and reviewed on the PC. Approximately 8 hours of play was devoted to single-player modes, and the game was completed.

Parents: This game was not reviewed by the ESRB, but it contains blood, violence. Don't let the kids near this one. Stalking, violence, blood, gunfire, a history of brutal child abuse. This is a notably nasty story for the genre, and should be rated as such, even if the ESRB hasn't bothered to.

Deaf & Hard of Hearing: It's a hidden object game with no audio cues. You're fine.