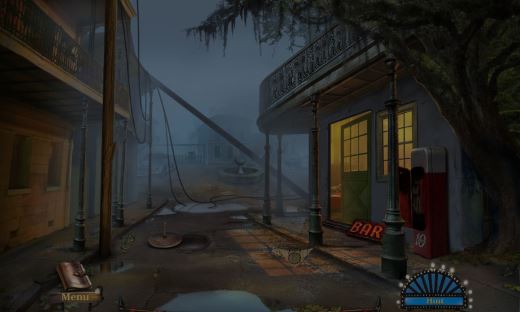 Right up top, just seconds into the opening movie, there's an evil clown. I can't stress enough how much goodwill that clown buys the game's developers from my point of view. I don't think of myself as an especially biased reviewer – there are game design elements that I'm partial to or disgusted by, but never without well-reason caused. Certain aesthetic choices, on the other hand, so fundamentally tweak my interests that I will forgive quite a bit of nonsense in order to see them implemented. Killer Klowns are very high on the list of things that can cause me to turn a blind eye towards a game's flaws. Which The Curse of Silent Marshes absolutely requires.

On to the Hidden Object judging criteria! 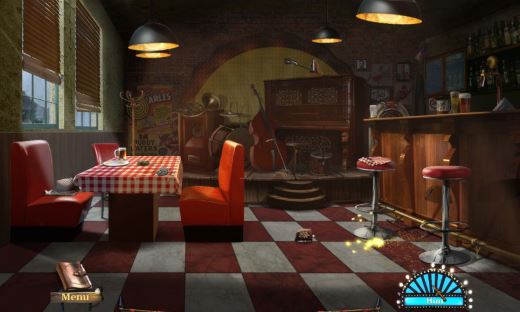 I'll be honest – it's pretty bad. Items are tossed around the screen with no regard to any kind of basic logic. This is a game where you'll find a globe, a teddy bear, and a set of knitting paraphernalia in the back of a pickup truck. Damned if I could explain why. There aren't very many screens in the game, either, which is a bit of a disappointment, since, other than their lack of logic or order, they're actually fairly smooth to navigate. All of the names are accurate and the items don't cheat on size or the rules of gravity. That might be damning with faint praise, but it's not nothing.

The searches follow the standard 10 for 1 logic of loading the item list with nonsense to stretch things out. This isn't unexpected, of course, but it's always annoying. At least the game's story, in which Anna, the main character, must rescue her friends from the clutches of an evil clown who has used voodoo to trap them in a dream world, has the kind of batty logic that would send someone scrambling through storage closets hoping that odds and ends could save the day.

The magical premise solidly establishes the kind of logic players are expected to bring to the game, so it's never jarring to be asked to break a doll out of a crystal ball, or use river water to erase the chalk which is creating a magical barrier. The contained location also keeps the player's journey at the forefront of their mind – right at the top Anna knows her goal is to free her friends and escape town, and every step she takes is a clear move in that direction. That's not to say all of the puzzles are fantastic; a few of them are so oblique that I was forced to lean on the hit button – who on earth sees a set of wire cutters hanging from an overhead cable and thinks 'I know, I'll shoot a flare at them!'. The game's story also ends in a frustratingly abrupt fashion – after spending a lot of time setting up the villain's backstory and motivation, I was sad to see no real resolution for any of the characters – just a 'well, that's over' once the final puzzle was solved.

The Curse of Silent Marshes may not be the Silent Hill rip-off I was hoping it would be, and it never bothers to explain why a voodoo-empowered villain chooses to dress as an evil clown, rather than a skeleton man or something – but I still found the game interesting to play. It's quite short, clocking in at just under two hours, and there aren't very many hidden object screens – each one must be visited twice to stretch things out a little. Still, beyond a few buggy puzzles and bizarre narrative leaps, this is a game with small ambitions which more than meets them.

If you'd like to play along with my journey through Silent Marshes, you can find the Youtube playlist here!