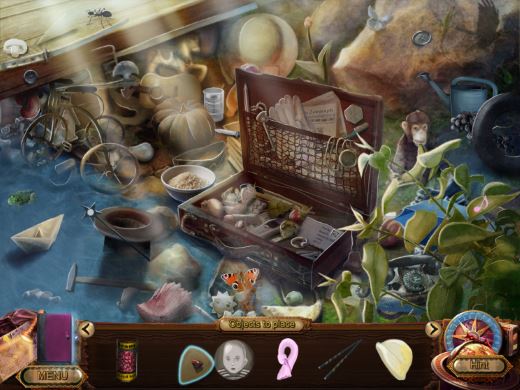 When Suzanne's fiancee goes missing in Prague after asking for her help in explaining what a Mayan artifact was doing in the middle of Europe, it's up to the player to help her save the day! This will be accomplished by lying to, stealing from, and in one case, actually poisoning the innocent bystanders who stand in her way. Adventure games with jerk protagonists are nothing new, but Suzanne is a special kind of self-centered a-hole. I understand that her cause is essentially just, but wow, is it strange how quick she is to deceive and inconvenience people to suit her own interests. Also, there's a part where she uses firecrackers to scare of some pigeons, presumably deafening them, when the same end could have been accomplished by simply walking up to them, waving her arms and going 'shoo'. So yes, I was a little uncomfortable with her as a main character.

Also, the game takes weird liberties with the hidden object formula, which I'll get into in the Hidden Object Criteria! 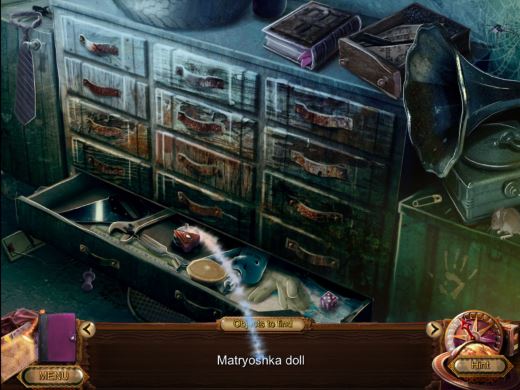 The game's developers obviously knew this was an issue, so they largely force Suzanne to find items in piles of garbage. This happens so often that it's actually kind of a theme in the game – there's a recycling station that people haven't been respecting very well, two dumpsters, a river that people use as a dump, even a net full of random items that have been dredged out of the ocean. It's nice to see developers putting in the effort of trying to come up with places which would have items to pick over, but sad to see that all they could come up with is trash heap after trash heap after trash heap.

Not in the least – and in a very strange way. While most games ask players to remove a variety of items from a pile of nonsense in order to find the item they need to proceed, Lost Civilization tasks them primarily with filling trash heaps with even more garbage. Sure, from time to time there's a classic 15-1 item search, but about as often the player will be handed an inventory full of random items, and match them with something on the screen that they're related to. Not only is this less entertaining than making items disappear, it makes considerably less narrative sense. Where are these extra items coming from? What is accomplished by adding them to the pile? At least in traditional HOSs there's a narrative figleaf in which we can imagine removing three armloads worth of items helps us locate the thing we're really looking for – even if it was right there in the middle of the screen all along. These 'Added Object Sceens' don't track in any way, shape, or form.

The developers do a decent enough job here. While adding garbage to scenes never makes any kind of sense, it's always in service of perfectly logical, if slightly dickish, goals. The game also moves along at very brisk pace. It's only two hours long, but in that time Suzanne will explore two major and three minor locations, go through more than a dozen HOSs and AOSs, as well as deal with puzzles that fit right in with the world in which the game takes place. As a narrative it has more than a few holes – no one ever really explains what Nibiru has to do with anything, and Suzanne is perhaps the most incurious archaeologist in the history of fiction, but by and large the story works as a frame to hang the various activities on.

While Lost Civilization is nowhere near the top of my list of Hidden Object Games, it's extremely professionally produced and never gets frustrating. This is largely due to something that I feel like the game should have singled out in its marketing – it has perhaps the fastest-recharging hint button I've ever encountered! I don't imagine players will need it that often, what with the HOSs being fairly large and easy to navigate, but it's nice to see the game letting players opt out of frustrating puzzles if they just want to get to the end. With its strange, wrongheaded innovations Lost Civilization isn't setting the world on fire, but there's much worse out there.

Also, the game features no Lost Civilization. Just a couple of Mayan pyramids.

If you'd like to play along with a trip through the game, a YouTube playlist can be found here!

Lost Civilization is available from Steam!