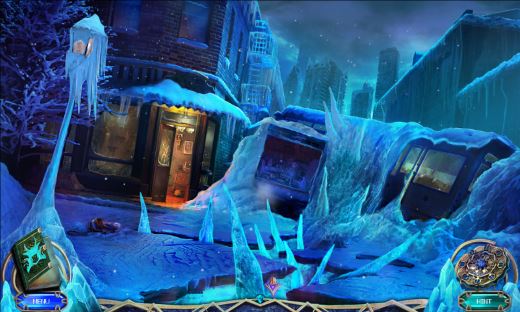 Set somewhere in Scandanavia, or possibly Russia, Insane Cold posits a fascinating premise – what if, for no clear reason, Frost Giants were to return and just start wrecking the place? Well, obviously it would be up to one man, armed with a magical amulet – which he possesses for no clear reason – to save the souls of their victims and use said spirits as a weapon against the evil giants from the ancient past. So yeah, nothing about this game makes much sense. Also, it's shoddily produced in a number of ways! But hey, forget my negativity, let's move on to a more concrete system of judging hidden object games – the HOG Criteria! 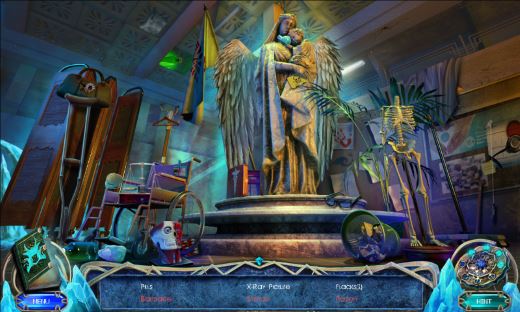 Oh my god do they ever. This game is set literally minutes after Frost Giants swooped in and started causing a fuss, but literally every hidden object screen looks like a pile of garbage with barely coherent themes. Yes, the hospital areas are mostly filled with medical supplies, and the aquarium is 50% fish stuff and 50% pirate things, but by and large, generic items are scattered all about in the hopes of cluttering up the screens even further. Worse, every HOS must be searched twice, but the game does not permanently remove all of the items stripped away on the first visit, leaving players without an advantage – or really any satisfaction – on their second visit.

It's the standard 'you want one thing, find 19 others' premise most games use – but even that simple gameplay dynamic seems to have confused the heck out of the developers, because they botch it in a number of ways. First there's the decision to not let players see all the items they're looking for at once – at any given time they're only allowed to look for six items, which is just absurdly small. Then there's the weird font the developers have chosen, which makes actually reading the names of various items surprisingly difficult. Not that it matters, since multiple translation failures wind up putting a completely wrong word onscreen. How on earth does the game expect players to see the word 'butterfly' onscreen and expect them to know they should be clicking on a bow tie? Just a mess all over, people.

The puzzles are at least a high point. There are some memory games, gravity puzzles, and a couple which fall under the broad 'draw a line between points without backtracking' category. They sort of make sense within the game world, so long as one doesn't think about it too hard. The game is very bad, on the other hand, at keeping a clear path in the player's mind and letting them know what they're supposed to to next. More times than I could count I'd find myself finished a set of rooms and then left completely baffled as to what was expected of me – invariably, the answer would be 'backtrack until a new HOS appears and you get a new item'. This is the exact reason that HOG developers started putting interactive maps in their game, and I didn't for a second hesitate to abuse the hint button in striving to discover which direction to follow.

Insane Cold: Back to the Ice Age isn't a very good HOG – there are plenty of decent HOG screens – including a standout set around a doll's house filled with cute animals, but the technical errors keep them from ever being effectively entertaining. As a story it's competently enough told, but there's nothing interesting enough to keep an English-speaking audience enthralled through sub-par gameplay.

Also, don't go to the ball-carrying statue puzzle at the back left of the first hospital screen until the hint button tells you to – a glitch can make it so it's impossible to leave the puzzle, and if you don't have the yellow ball necessary to solve it, you might have to quite the game! So… yikes.

If you'd like to play along with my oft-times frustrating trip back to the Ice Age, just click here to load the playlist!