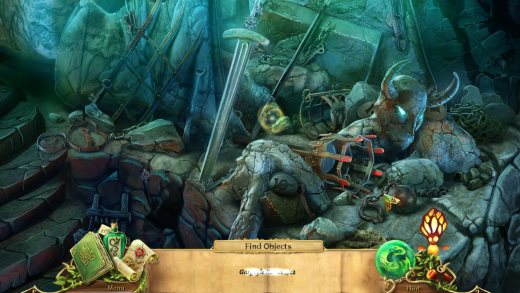 That's two games in a row that have just blown me away. Inspired by the high quality of the Grim Legends 3 beta, I resolved to check out the series it's the third entry in, and that has proved to be an incredibly fruitful decision. Song of the Dark Swan is not a sequel to the previous game in the series, just another excellent dark fantasy story. It does have some similar themes, however – tragic tales of love gone wrong, people transformed into animals, identical twins… it's clear that this is a follow-up to The Forsaken Bride, but it never feels like a rehash. Grim Legends 2 has its own story to tell, and it does so in a stellar fashion. 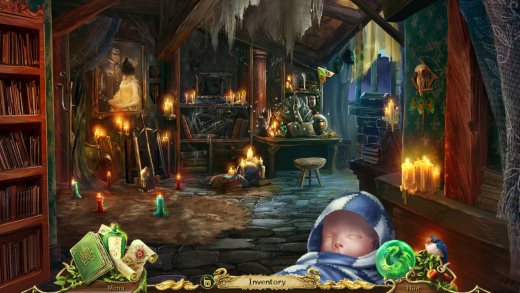 Not at all. Again proving that artists working at the top of their game can make HOSs beautiful, the developers offer screen after screen of appropriate items scattered logically around believable locations. There are cluttered storerooms, an alchemist's tables, and a few destroyed structures to comb through looking for items, and the developers have made sure each one is completely gorgeous. The art style, with its thick, almost hand-painted lines and amazing attention to detail, its consistent through the entire game, making every HOS a pleasure to play.

Almost entirely. While there are a couple of 12:1 screens, by and large the hidden object sequences in this game are made up of construction screens, mini-puzzles, and integrated  puzzles. The integrated are probably the most impressive this time around, since the developers have found a great excuse for giving the player HOSs which are fully integrated into the story. The main character is a herbalist and healer brought to a remote kingdom to cure the queen's inability to speak, and during her adventures she'll have to assemble more than a few poultices and potions. As a consequence, the game is packed with a large number of 'ingredient hunts', in which the player must find a variety of reagents in completely logical locations. This is a great way to fully integrate hidden object screens without ever stretching the world's logic. All of the HOSs are hugely varied – especially in the bonus mission, which features a section set in a tiny town for faeries. These sequences are especially creative, as they do a great job of playing with perspective – a coffee grinder becomes a large structure, a vegetable stand is packed with single beans – it's all clever and carefully realized.

Setting this up as one of the premiere Hidden Object series, Song of the Dark Swan is every bit as brilliantly constructed as the previous game in the series. The story moves from strength to strength, telling a fascinating and often tragic story full of surprise developments and sinister characters. As usual, the story is confidently told, through dialogue, documents, and puzzles – but the game manages to one up its predecessor by working in a little environmental storytelling as well. There are a number of locations in the game which manage to give players a window into the world's history and characters simply through their excellent design.

Even my biggest complaint about the previous game – that segments of the story were locked away behind some too-challenging pixel hunting – has been rectified this time around. There are still hidden objects to find in every screen, but now they don't flit in and out of this dimension, and they're only attached to an achievement and piece of artwork, rather than a good chunk of the plot.

Grim Legends 2 is a pleasure from beginning to end. There isn't a bad hidden object screen in the bunch, and I only skipped a single (extremely fiddly) puzzle, which may actually be a record for me. It builds on the successes of the previous game in the series, managing to enthral and captivate its audience in the main game, and then delight them with the wonderfully silly trifle that is the bonus chapter. These are two absolutely spectacular HOGs, and they've got me more excited for Grim Legends 3: The Dark City than I was after playing an hour of it.

Grim Legends can be purchased from Artifex Mundi!