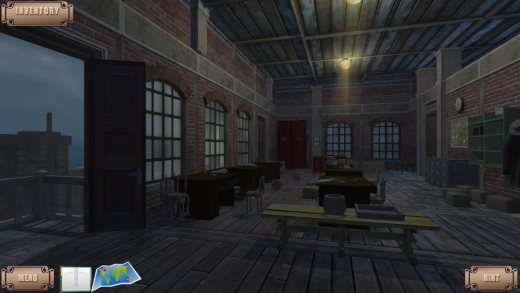 This is something of a milestone here at the HOGuru's Haunt. That name is not going to catch on, I'm guessing. The milestone, though, is something else – this is the first all-3D HOG I've even encountered. It may be the only all-3D HOG there is, although I'll have to do some research into that. I'm used to the occasional 3D backdrop, and I've seen plenty of 3D animated cutscenes, but Ferrum Secrets is the first time I've seen someone build an entire world out of polygons and then dump a bunch of items in one place and expect me to sift through them. Based on this audacity alone Ferrum deserved a look, and I was certainly surprised by what I found. 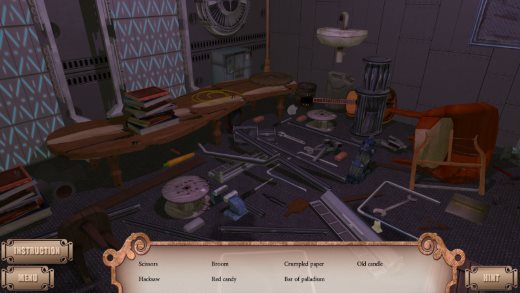 Almost not at all. This is the first thing I noticed about Ferrum Secrets – objects seem less random and arbitrary in 3D. I'm sure this is partially a factor of the novelty, but the internal consistency of having the various clickable items all made of the same basic lines and textures as its surroundings massively simplified the struggle of getting artwork to match that so bedevils 2D HOGs. This could easily sound like damning with faint praise – 'everything looks terrible, so the objects fit right in!' – but that's not my take on it at all. While the environments may be primitive, harkening back to the days of Myst or D, the locations they depict – a trashed house, a run-down factory – are the kinds of places one would expect to have scattered piles of refuse, so setting HOSs there seems natural.

Not entirely – the hidden object screens are largely of 12:1 construction, other than one diversion to find plants for a potion. The game's developers at least recognize that this is an issue, so they cover up the problem with a figleaf explanation, having their heroine announce that she should 'clean up' the various areas if she's ever going to find the item she needs. The screens aren't then constructed so that a variety of items actually have to be removed in order to find the important one, but at least some effort is being put in.

The game is all over the map here. While I applaud the interesting choice of engine and art style, it's impossible to overlook how shoddy and random much of the construction is. The HOSs are well-designed, and there are some fairly clever puzzles – especially one that takes advantage of the 3D camera to let players move around a series of pipes that they need to turn on and off. The story around them is just odd, almost as if it was cobbled together around the assets that they developers had on hand, rather than starting with the plot and constructing from there.

The story concerns an evil fog that has fallen over a city, and the disappearing scientists who are somehow involved in its creation. Nothing wrong with that, other than the fact that there's no fog to be seen in the vast majority of the game. The most puzzling thing, however, is a strange interlude in which a witch – pictured below: 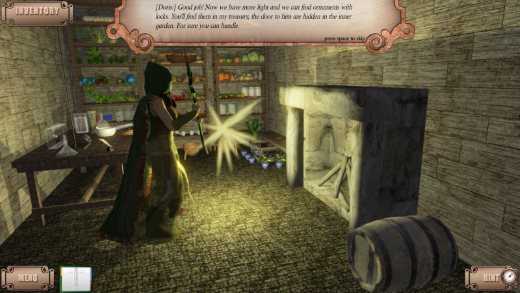 Helps the player brew a potion to cure an arbitrary illness they gained in the previous chapter. If it seems like the witch in question looks like she's ready to his something with a magic staff, that's because she's obviously a pre-made model that the developers simply dropped into the game, irrespective of how it fit into the setting. It's incredibly jarring to be playing a game about stopping a steampunk zeppelin from using chemical weapons on a metropolis and then suddenly have a sidequest send me into a magical dungeon to find reagent. The whole sequence obviously exists only to pad out the game's extremely short running time, so I was understanding – but it still derails attempts at narrative pretty badly.

Despite its extremely short running time and fairly basic puzzles/HOSs (I neglected to mention, but 3D hidden objects are much easier to find than 2D ones), I was fascinated by Ferrum Secrets. Yes, that's entirely due to the fresh concept, but if nothing else, this game should encourage other developers to take risks with the genre. This isn't a great game, but as a proof of concept that HOGs can work in far more broad environments than had previously been believed, it might just be an important one.

Want to see my playthrough of the game? Just head over to this playlist!