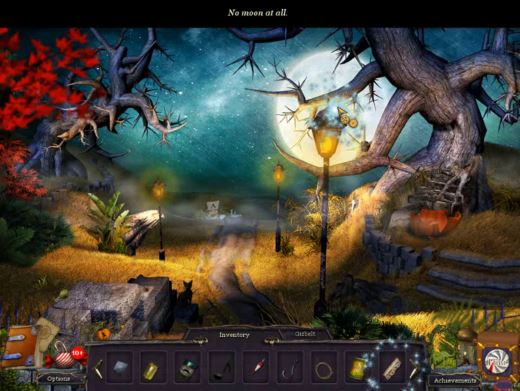 It's rare that a game so thoroughly defeats me in the way Evil Pumpkin did. It's not that I wasn't able to finish the game – a slowly-recharging hint meter and the extremely helpful denizens of YouTube ensured I would be able to brute-force my way through the trickier sections. No, Evil Pumpkin foiled me by forcing me to resort to hints over and over again. A well-designed adventure game – and make no mistake, this is more of an adventure game than a HOG, to the point that the hidden object screens are actually optional – moves players through the story in a logical fashion, presenting them with obstacles to overcome and giving them fair clues and tools to allow them to struggle their way through.

Evil Pumpkin goes a different way entirely, loading itself up with nonsensical, sometimes buggy, puzzles and some of the least impressive HOGs in recent memory.

On to the HOG criteria! 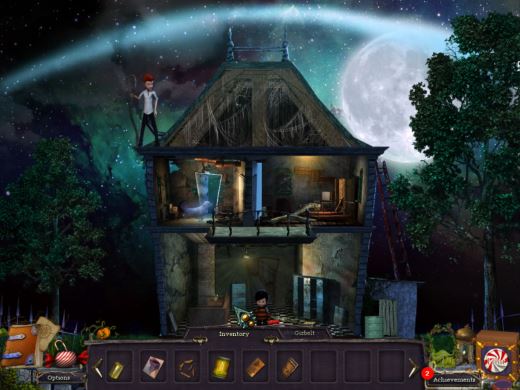 It's pretty bad. While the game does a passable job of restricting its searches to areas that would logically be cluttered, many of those areas are littered with items which make no sense given the setting – and that's just in the logical areas. There are also plenty of screens where a load of nonsense is tossed in. A church pew? Seems like a good place for a gold bar, straight razor, bullet and tree! It's just a mess for mess' sake. And that's not even getting into the rampant cheating that goes into item placement. There isn't much size cheating – the game has a good grasp of perspective, at least. That doesn't stop it from defying gravity, changing colours, and going transparent whenever it suits the developers' purposes. Just shoddy work here.

Only in the most cursory fashion. There are the standard 12:1 item finding sequences, but beyond that, no justification is given for the searches. This is largely because the game is far more interested in its puzzles than its searches – on the 'difficulty select' menu, HOSs only appear as an element on the lowest difficulty setting, aimed at 'casual' players'. This suggests that serious adventure gamers wouldn't bother with hidden object searches, and should focus on the game's other, more nonsensical puzzles. Given this attitude towards the genre they're working in, it's no surprise that the game's hidden object screens are so lacking.

Not well at all. The story follows a little boy on a journey to find out why his town is the only place in the world without a Halloween. It's not a bad premise, but his method of investigation never makes much sense, and the conclusion he comes to seems utterly random. This isn't helped at all by the game's terrible puzzles, which range from annoying to buggy. This isn't just a case of my distaste for sliding block puzzles rearing its ugly head once more. There's the equivalent of a jigsaw puzzle with pieces that don't fit together and offer no clue as to where they're to be placed on the board. There's an 'eliminate the subjects' game whose rules are so oblique that I could see people being driven mad. Then there's a puzzle which is just plain wrong – as in the developers forgot their own world's rules when crafting it, so the answer doesn't make any logical sense.

With its lacklustre HOSs, frustrating puzzles, and hint/skip meter which takes forever to charge, Evil Pumpkin: The Lost Halloween is a disaster on every level. Literally the only thing that the game has going for it is a wry wit that surfaces in a bevy of puns offered for nearly every circumstance. For anyone uninterested in wordplay or adorable talking animals, this game offers nothing to recommend.