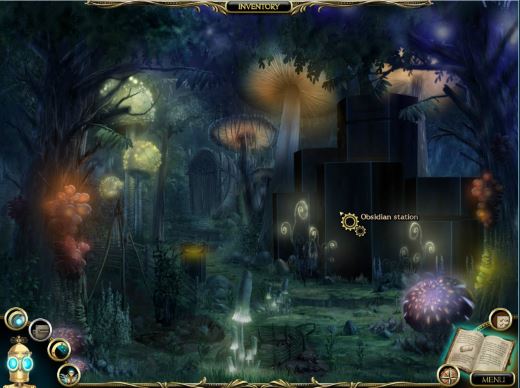 It's always annoying when technical issues get in the way of enjoyment of a game. I'm doing this to compliment or complain about design decisions, not coding errors. Where's the fun in pointing out that someone forgot to add a colon somewhere in the thousands of lines of text that make up the framework of a game? Still, sometimes games are so badly compromised that it must be mentioned. Clockwork Man: The Hidden World is one such game. It tells the story of Miranda, a young scientist bent of uncovering the secret behind her parents' disappearance nearly a decade earlier. She'll travel to Thule with the help of her clockwork robot sidekick – a small golden droid who speaks entirely in bleeps and bloops, turning him into a sort of combination C-3P0 and R2D2.

Sadly, this journey is hampered by both design errors and technical gaffs, which I'll detail as we move through the… Hidden Object Criteria! 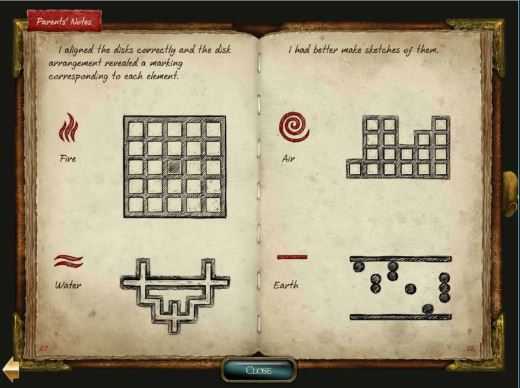 Oh, it's bad. Extremely bad. While the game tries to keep the items true to the steampunk Victorian setting, there is no excuse for how absolutely covered in garbage the game's screens are. One particularly dire example gives a quaint Irish cottage the character of a trash yard, with empty pots, furniture, and bits of food scattered over every concievable surface. Then there are rampant cases of size-cheating – in one case I was asked to look for a pocket knife which was hidden in the spokes of a wagon wheel, making it something along the lines of eighteen inches big. This is all made worse by the developers' decision to include 'scrolling' hidden object screens, in which the player is forced to scroll the screen up/down or left/right to find all the items. I'm baffled by this choice, since it takes the baseline concept of hidden object games – put 20 items on a screen and have the player look for them – and increases the amount of trash-covered space they have to look through by threefold. Absurdly, this massively increased difficulty is accompanied by one of the slowest-to-recharge hint buttons I've ever encountered. Also, during once stretch of playing the game the hint button glitched out on me and flat-out refused to recharge, stranding me alone with some of the most annoying difficult hidden object scenes ever.

Absolutely not. This is classic 'find a load of nonsense, get one useful item' design. Occasionally the game offers some meagre justification, such as 'clean up all the bottles in this yard' or 'help me find all the food I've squirrelled away', but by and large there's no rationalization given for any of Miranda's searches.

It's a compelling enough narrative – villains are on their way to Thule, where Miranda's parents were last seen, and she's got to go along to stop said conspirators from ruining that paradise undisturbed by history. The journey isn't structured particularly well, opening with Miranda exploring a mine, then flashing back to an extended sequence of searching through offices and attics a few weeks earlier. The developers are trying to use the cinematic device of starting with the action and then zipping back to tell the story, but the mine exploration isn't notably more thrilling than searching for old documents and artifacts hidden in a house – this is a hidden object adventure, after all, and the 'thrilling' scale is only ever going to get so high. While the hidden object puzzles don't usually make the most sense, at least the puzzles hit in nicely with the setting. Repairing a submarine and unlocking alien technology seem like the kind of things that could be solved with clever puzzle design, and they are – but the lack of a skip button could prove terribly frustrating to players looking to just enjoy a pleasant story and some object hunting.

Clockwork Man: The Hidden World has too many missteps to easily recommend. The HOSs are needlessly complicated – beyond their sheer size, they also feature parallax scrolling, meaning that different planes of the background move at different speeds, covering items at different times. Good luck finding a snake when it's only visible for a few degrees halfway to the right edge of the level! Glitches in the hint system mean that sections of the game drag on  far longer than they're welcome, and sometimes the music gets stuck, and continues playing a single set of atmospheric effects in every screen. It's a mess, and the story just isn't good enough to be worth slogging through to experience all of it.

If you'd like to play along with my journey through Clockwork Man: The Hidden World, and hear me go mad with frustration, you can find the YouTube playlist here!

Clockwork Man: The Hidden World is available from Steam!