The Path of Blood 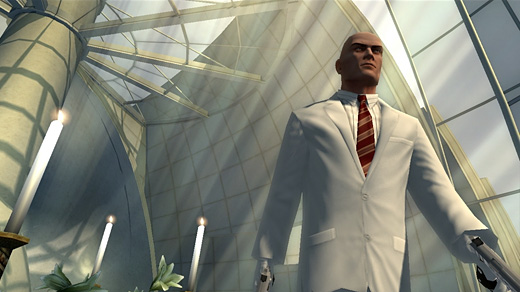 HIGH HD Traditions of the Trade.

LOW Trying to sneak up on someone in Silent Assassin.

For me, the most notable thing about the Hitman franchise is just how long it took for the developers to figure out exactly what it was they were building towards.

Rather than the normal path of video game sequel development in which features are layered upon basic concepts, the Hitman series always seemed like a compromised vision. Each installment was fresh, different and engaging, but also gave the sense that they were never quite what that the developers had set out to make.

For instance, if someone starts with Super Mario 64 and then immediately jumps to Super Mario Galaxy 2, they'll be able to see how the first game developed into the second, but they wouldn't look at Super Mario 64 as being creatively compromised due to a lack of gravity tricks and spherical worlds—yet that's exactly what happens with the Hitman series. The first three games feel like like little more than interesting dry runs whose primary accomplishment is to point the way towards the fourth, Blood Money. For players who want to experience the journey the developers went on, the Hitman HD Trilogy

gives them that chance. They'll start with the complex multi-stage missions and far-too-big levels of Hitman 2, explore how faithfully remaking Hitman in Contracts distracts them from their better design ideas, and then everything comes to a head in Blood Money, which is still the best Hitman game ever made.

Let's break it down.

Hitman 2 picks up some time after the first game (PC only) left off. Opening with the kidnapping of 47's only friend, the adventure follows him through a journey of vengeance that only lightly touches on the series's overarching genetic engineering storyline. 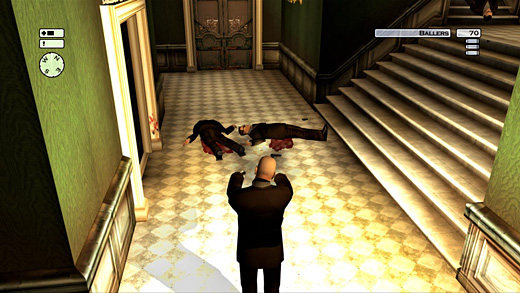 Graphically, the HD update doesn't do much Hitman 2 much good—while everything is super-crisp, the game's environments show the result of having been developed on more primitive systems. Textures are flat and dull, rooms are barren and undecorated, and there's a severe lack of bystanders in what should be cluttered alleys. Even the HUD suffers in the adaptation—the health and suspicion meters worked fine on large 4:3 CRT screens, but they're hard to read and look strange on widescreen HDTVs.

The gameplay in Hitman 2 is also some of the series's weakest. While the advancements it made (grading on stealth, the ability to incapacitate bystanders) were key to the series's future, the core is stiff and unrewarding. Gunplay is awkward, disguise is unintuitive, and moving quietly is almost unbelievably frustrating.

Enemy AI—even on the lowest difficulty settings—is incredibly suspicious of anyone doing anything but walking in a straight line. This wouldn't be such a chore if walking wasn't maddeningly slow—crossing some of the game's overly large maps without running could take nearly ten minutes, which is flat-out inexcusable. Heaven help those who want to move quietly—the silent crouch-walking is even slower, making it only suitable for sneaking up on tortoises, statues, or statues of tortoises.

It's not all bad, however. Once the player escapes the sluggish Russian missions, they'll find a few well-designed levels that allow a wide variety of approaches to taking out their targets, along with a number of interesting changes in scenery. There's also one late-game twist that's almost worth the price of admission by itself, as the developers use a visual trick to lure the player into a bad situation.

Hitman: Contracts is a vast improvement over its two predecessors in most respects, not the least of which is the fact that the far more complex and detailed levels show off the HD update. Still, its nature as a remake prevents it from truly taking advantage of the new ideas it pioneers.

Picking up exactly where the original game left off, Hitman: Contracts will confuse the hell out of anyone coming to the franchise with only console experience. In point of fact, the series's genetic engineering storyline gets so little mention in this title that I'd expect newcomers to be baffled by the game's opening images as 47 leaves an insane asylum, stepping over dozens of corpses who looks exactly like him. 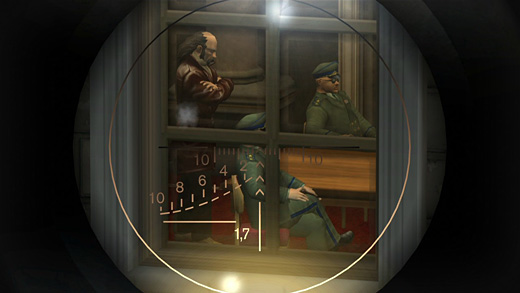 From there the game becomes a strange hybrid—half is a remake of the original game's levels that have been tweaked to allow for stealth play and grading, and half is new content. While the changes to the classic levels help a little, they're still far more restrictive than they should be. The new levels (along with Traditions of the Trade, the original game's only real experiment in open-concept assassination) are uniformly fantastic.

Whether the player is infiltrating a decadent slaughterhouse party, working their way through a hedge maze deep in the English moors, or dodging a SWAT team in a dilapidated hotel, each new area gives players the freedom to explore and execute the level however they like, along with ample tools to make exploration truly rewarding. While it may not be fantastic yet, Contracts speeds up 47's sneaking just enough so that it's possible to move around guards without their knowledge and position him in just the right location for garrotting.

All of these developments culminate in Hitman: Blood Money, an incredible game that everyone should have already played. Just in case someone hasn't, I'll outline its virtues—great gunplay, customizeable and upgradable tools, infinitely replayable missions, a mostly coherent story, and the big one: the ability to completely hide 47's actions by creating fake accidents to take out his targets.

Blood Money has the series's most varied locations and mission objectives, along with an incredibly large number of ways to approach them. With this game IO Interactive presented players with a playground of assassination and let their imaginations run wild. The results were fantastic, especially because the developers finally caved and added speedy sneaking. (Not that I'm obsessing or anything.)

shows a series in a constant state of reinvention and experimentation. As the years went by, the developers shaved some rough edges and expanded what worked, gradually transforming it from a curiosity for the hardcore to a wholly accessible murder simulator that anyone can enjoy. While some might pine for the older, stiffer and more difficult Hitman games, the HD Trilogy makes a strong argument that each iteration was a step towards something truly great. While each title has high points worth seeking out, their true value lies in the fact that they had to exist before Blood Money could be a reality. Rating: 8.0 out of 10.


Disclosures: This game was obtained via publisher and reviewed on the Xbox 360. Approximately 15 hours of play was devoted to single-player modes, and the games were completed.

Parents: According to the ESRB, this game contains blood and gore, intense violence, sexual content, strong language, use of drugs, partial nudity. You shouldn't let your children anywhere near these games. It's a game about professionally murdering people. Sometimes those people are mostly naked. Also there are corpses lying on flophouse beds, dead of drug overdoses. Just far away is where they should be.

Deaf & Hard of Hearing: This game is super-accessible for the hard of hearing, with few, if any audio cues, and a convenient meter letting the player know if they're being looked at by guards. All instructions have onscreen text.

There isn’t a bad game in this collection. Even though I still have them on PS2, I just had to purchase this brilliant HD version, both for the usual entertainment purpose as well as showing my disdain towards Absolutions “Hitman Lite” direction.

Happy to report I got my 3 Platinum Trophies the other day.

I bought Blood Money on Xbox Live right before this trilogy was announced. Sounds like that was the way to go. If only I could get past the second mission…