Oliver Stone is Rolling Over in his Grave 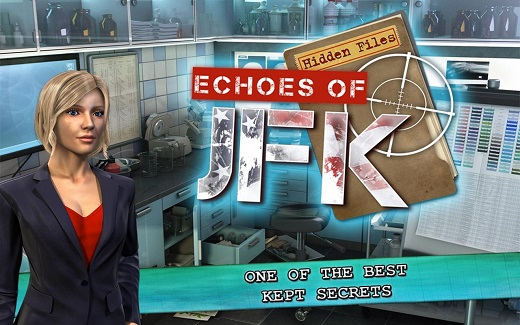 LOW Literally nothing else does.

WTF Wait, (SPOILER) is in on the coverup? That seems like a pretty extreme accusation, guys.

I'm always a little taken aback when an HOG's plot attempts to represent an actual law enforcement investigation, rather than the far more popular trope of a gifted and motivated amateur meddling in things far out of their depth. It's easier to accept a character wading through piles of trash while searching for a grasshopper-shaped brooch if they don't also have a badge, gun, and more important things to do with their time.

Hidden Files: Echoes of JFK is perhaps the most egregious example of the disconnect between the real-world job that the game attempts to depict and the actual gameplay being offered. As an FBI agent looking into the death of a reporter who was investigating the JFK assassination, I can't think of any logical reason for the majority of the things the game has me doing.

It's about 50/50 this time around. By setting the game in abandoned storage facilities, cluttered offices and a junkyard, the developers have managed to find logical reasons to fill their game with piles of garbage that must be sorted through. Then they threw in a few more screens of important government offices, apartments, and high-priced vacation homes that are also filled with random garbage, and all traces of verisimilitude go right out the window.

Unfortunately, the game leans quite heavily on the standard 'find fifteen random items for every important one' mechanic. Worse, the screens themselves are absolutely packed with cheating on the developers' part. Items are resized and even recolored to render them nearly invisible against the background. I found myself leaning on the 'hint' button far more frequently than usual, and never once did the reveal of an item's actual location make me feel like missing it was my fault for not paying close enough attention.

While the searches are well below average, Hidden Files's puzzles are pleasant diversions, which also manage to fit well with the narrative. While some require players to accept that sane professionals would craft truly bizarre locks to hide their secret documents, most have the overall feel of fictional policework as players experiment with fingerprint identification, file decryption, and a poorly-implemented shooting gallery sequence.

Also notable is how clearly the developers' lack of familiarity with English shows through. There are typos all over the subtitles and files that appear, and even the names of objects are so badly mangled that they make the game more difficult than it should be.

Asked to find a 'reel', I spent two minutes searching for a film canister or part of a fishing rod before finally giving up and hitting the hint button—which revealed that the game actually wanted me to click on the spindle of thread sitting beside some bottles. This was far from the only example I encountered. One time—and this is not an exaggeration—the list of items demanded I find a 'hat', and then the hint button revealed that it really meant I was supposed to click on a pair of goggles.

Hampered by a nonsensical plot, unrealistic activities and mediocre HOG screens, Hidden Files: Echoes of JFK comes nowhere near living up to its premise, and is neither crazy enough to recommend ironically, nor competent enough to recommend for those looking to relax with a little clicking. While the scenes may be universally well-drawn, their attractiveness can't hide the fact that the game is a mess. Rating: 3.5 out of 10


Disclosures: This game was obtained via paid download and reviewed on the PC. Approximately 6 hours of play was devoted to single-player modes, and the game was completed.

Parents: The game was not reviewed by the ESRB, but it contains blood, violence. There's some blood, shooting, and references to alcohol and smoking. More importantly, though, it suggests that the entire US government is involved in a conspiracy to cover up the murder of JFK, a revelation which might shake your children's faith in all authority figures. Allow them to play at your own risk!

Deaf & Hard of Hearing: It's a HOG with no audio cues. You'll be fine.