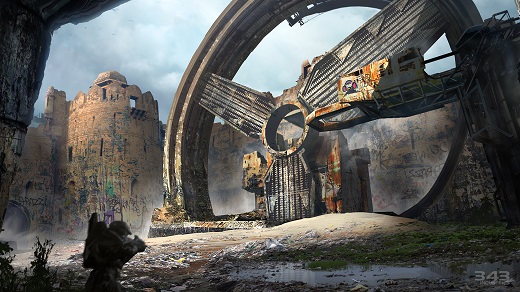 LOW I couldn't get the multiplayer to work even once.

WTF How do the first three Halo games still not have subtitles?

Halo: The Master Chief Collection is a bit of a disaster.

Why? It's a half-assed, crudely cobbled-together product prone to crashing, lockups (and as of press time) absolutely non-functional multiplayer.

I repeat, the multiplayer absolutely did not work at the time of review. An hour's worth of attempts on four different days each resulted in nothing but failed connections and dropped matches. That the game was released with matchmaking this broken is a stain on the already uneven franchise.

Once that colossal screw-up sinks in, the other failures aren't a huge surprise—everything about the game's presentation suggests that very little work went into getting three of the four games included ready for release. If I had to guess, I'd say that Microsoft had planned to put out a remastered Halo 2 as a standalone product, and then changed their minds and threw another three games on the disc so they could charge full price for it.

MCC's edition of Halo: Combat Evolved is the exact same one that was released as Halo Anniversary a few years ago. It remains a bland graphical polishing of the original title, although I was surprised to see that 343 didn't take this second swing at the game to fix the errors they made last time. When adding bloom and flare effects to some of the game's larger weapons, the developers got carried away, making plasma shots so bright that it becomes impossible for players to tell what they're shooting at unless they switch back to the original graphics. An embarrassing thing to miss once—but twice? That's just sloppy.

To the developers' credit, Halo 2 does look great. It follows Halo Remastered's practice of simply swapping out textures and models for more attractive versions of the originals, but where that game's replacement graphics were flat and lifeless, Halo 2's are lush and full of depth. 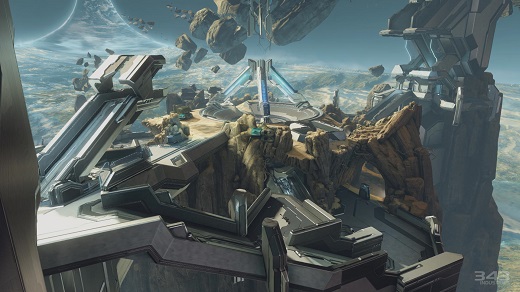 Previously, allowing the player to switch between the original and remastered graphics modes with the push of a button had been rarely more than a novelty—here it allows players to see a dramatic realization of just how far graphics have come. The Flood transform from flesh-toned balloons into multi-tentacled monstrosities, and hulking Brutes go from being embarrassing Quake-era throwbacks to frighteningly-muscled foes with real threat behind their motions. This remastering process has one major drawback, however—due to their decision to revamp the graphics and absolutely nothing else, the developers have crafted a Halo 2 that plays much older than it looks.

When originally released, Halo 2 was pushing the boundaries of what the Xbox was capable of, but now its technical restrictions seem arbitrary and out of place. Worse, when immediately followed by Halo 3 and 4, the architecture seems extremely primitive and bare. So many of its maps are filled with wide open spaces and long, dull ramps, and whether human, Covenant or other design, the environments always consist of straight lines without a lot of clutter for the processor to keep track of. The façade laid atop Halo 2 is a gorgeous one, but it remains just a façade.

Halo 3 appears completely untouched, for better and for worse. While my problems with that game's design remain, it actually works better here because it comes off like the last nine levels of Halo 2, rather than a standalone product—wedged in the middle of this collection, it no longer feels too short for players to get their money's worth.

However, Halo 3 suffers the most in comparison with the technological upgrades of the games around it. While the levels and enemies are as attractive as ever, the developers have done the game a massive disservice by not finding some way to freshen up the cut-scenes. Upon its original release, Bungie's decision to have story segments made up of 3D models flying across low-res concept art was baffling. The fact that those exact sequences were left as is with the backdrops blurrier than ever is inexcusable.

Halo 4 is the exact same game that came out two years ago. It's the best looking game by far, but suffers from a total lack of ambition and an unwillingness to innovate. After players have fought their way through an epic trilogy concerning the end of the Human/Covenant war, Halo 4 comes along and 'freshens things up' by asking players to spend more than half the game fighting more Covenant foes.

The new setting in 4 is an interesting one and the new villains are some of the most visually complex things the series has to offer, so it's a disappointment to see so many elites and grunts running around because… the developers didn't want to have to bother coming up with any new vehicles? Halo 4 also has the distinction of being the buggiest in the collection—while all of them locked up at one time or another, only Halo 4 crashed to a black screen with red error messages written on it.

If the developers had gone all the way and rebuilt Halo 2 instead of just re-skinning it, it could've sold as a standalone product. Had Halo 3 been tweaked to be visually consistent, it could have helped the collection deliver a unified, epic experience. Sadly, that kind of major overhaul wasn't done, leaving an unsatisfying product that's a pale shadow of what it had the potential to be.


Disclosures: This game was obtained via publisher and reviewed on the Xbox One. Approximately 30 hours of play were devoted to single-player modes (completed 4 times). Multiplayer modes were not sampled due to server issues.

Parents: According to the ESRB, this game contains: blood and gore, language, violence. Keep your kids away from this one. Not only is incredibly violent with murder being the only way to meaningfully interact with any of the other characters in the game, but players are actually encouraged to gun down enemies that are fleeing and screaming in terror. Lots of yikes. There are no drugs or swearing of note, but Cortana's outfit does get progressively more suggestive with each passing iteration, culminating in part four, where she is depicted essentially is a naked woman wearing circuitry.

Deaf & Hard of Hearing: I've never seen a game as actively hostile to deaf and hard of hearing gamers as this one. Most of the game's plot occurs in non-subtitled dialogue during the game's levels, which you will be completely missing out on. Worse, all of the game's specific directions about what players are supposed to do next—go through that door, blow up that reactor, destroy that skyhook—are given through dialogue, and without that dialogue, you will spend minutes of the game with absolutely no idea how you're supposed to progress until, eventually, the game takes pity on you and finally gets around to putting an objective marker on screen. This was inexcusably bad design. When all of these games originally came out over the past 10 years, the fact that there is still no subtitling for objective indicators is frankly insulting. On the upside, apparently 343 Industries doesn't share Bungie's antipathy towards the disabled, because Halo 4 is fully subtitled.