In the Order They're Recieved 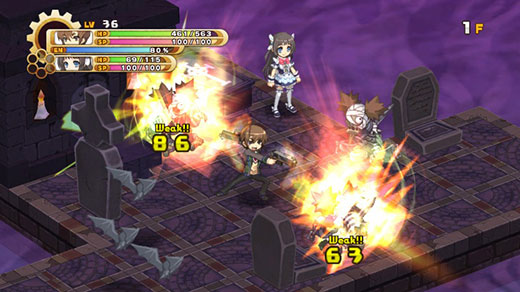 LOW The game demands that players grind for levels in order to have a chance of beating bosses.

offers players the chance to be God, and to do what God does – answer people's prayers. Because this is from Japan, God is a high-school student who wins the job in a lottery, and is assisted by pretty angels who dress in maid costumes. Because this is a video game, the way God alters fate is by traversing dungeons and beating up the monsters that represent psychological and external factors that keep people from having the things they wish for in life. It's such an absurd and audacious premise that even if the Roguelike gameplay was a disaster, I still would have been with it to the end.

From the start, GFP is captivatingly weird. The main character, Renya, is told that his new duties as God are to use a machine to enter a simulation that allows him to subtly change the fate of wishers by beating up a variety of colourful creatures. The first person he has to help: Cinderella – who's concerned that her story doesn't send a good message to young girls.

Renya is understandably confused, until it's explained to him that his powers aren't just limited to the present world – all creatures, real or fictional, past or present, on earth or around the universe, are God's children, and their fates are his responsibility. This creates expectations that the game can't possibly fulfill, but it does serve to prime the player for how weird the story gets as things chug along. I won't spoil anything, but suffice it to say that a lot of time is spent exploring exactly how one defines the term 'God'.

This is my first attempt at a Japanese turn-based Roguelike, and it's interesting to see the spin that they've put on the genre. While permadeath (one of the key elements of the genre) is left out of this story-driven game, GFP finds its own way to cruelly punish failure. Instead of traditional level-based character advancement, players gradually up their equipment, which provides a percentage-based boost to their HP, attack, and defense stats. That's all lost when forcibly kicked out of a simulated dungeon.

There are only ten dungeons in the game, which makes Guided Fate Paradox a little short on content, for even an off-model JRPG. There's plenty of story on hand, but the dungeons themselves feel a little brief, especially during the required repeat trips that are necessary to get strong enough to defeat later bosses. However, in addition to the interesting plot, the dungeons themselves are surprisingly well-designed.

Each area offers a major gameplay twist to the top-down dungeon crawl. One has Renya exploring six sides of a cube, another forces him to constantly race just ahead of a deadly fog, and the most punishing level places the player in an ersatz Garden of Eden, where fruit splats across the floor tiles every couple of turns, providing bonuses and penalties for the player and their foes alike. Sadly the game's enemies aren't as interestingly varied as the levels they inhabit – while I was expecting to see familiar faces pop up in the challenge dungeons, it was disappointing to have early game monsters turning up with new paint jobs in the later levels. With only ten areas to populate, I would have thought the developers could have managed a little more diversity.

Wearing its weirdness and humour like a badge of honor, Guided Fate Paradox

is a fresh take on the Roguelike genre with a quirky tale and dialed-back difficulty that ensures it's accessible to all audiences. Whether it's JRPG fans curious about cruel dungeon crawling, or Roguelike purists wondering what's going on with all those big-eyed dolls and their debates about optimal breast size, there's definitely something here to bring fanbases together. Rating: 8.5 out of 10


Disclosures: This game was obtained via publisher and reviewed on the PS3. Approximately 45 hours of play was devoted to single-player modes (completed 1 time).

Parents: According to the ESRB, this game contains fantasy violence, language, suggestive themes. You shouldn't find this too objectionable. The 'angels and devils warring' storyling may hew a little close to blasphemy for the religious-minded among you, but beyond that it's fairly harmless. Even the busty angels don't come across as especially wanton, and the swearing is absolutely on the tame side.

Deaf & Hard of Hearing: You will be great this time around. No audio cues, all of the dialogue written out because it's spoken in Japanese… no, there's only one problem: a few situations in the dungeons can cause monsters to be offscreen and still able to attack, and one monster makes a distinctive sound while preparing said (extreme damage) attack. Without that warning surprise deaths are definitely possible. It's definitely an uncommon occurrence, though.