If Solipsism Was a Game… 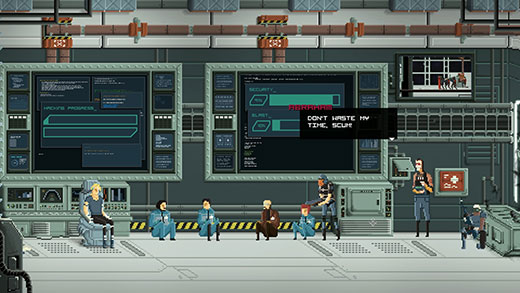 HIGH The reveal of exactly what's going on is very well handled.

LOW The boss fight that's only winnable if the boss chooses not to do a certain move.

WTF Nothing you do matters? What!?

Warning—This review of Gods Will Be Watching is full of SPOILERS.

It is full of spoilers because it is impossible to talk about the game's fatal mistakes/bold design choices (depending on who you ask) without getting deep into the plot. I am here to discuss what this game is, what it wants to do, and what it actually does, and it's impossible to do that without spoiling every secret the game has locked away in its eight-hour running time.

For a spoiler-free opinion, please go back to Sparky's main review. Otherwise, read on…

So, decisions matter. They matter because they affect other people. The choices we make ripple outwards, changing lives around us. That's why they're important.

In what can charitably be read as an attack on the omnipresence of half-assed video game morality systems, the developer of Gods Will Be Watching has created a game that revels in the irrelevance of the decisions that the player makes. GWBW offers high-stakes situations filled with life-or-death choices, then rubs players' faces in the fact that their decisions don't matter, because after all, this is just a game that can be reset as many times as necessary to obtain the optimal outcome.

In the distant future, the heavy-handedly-aptronymed Sergeant Abraham Burden has been tasked with a mission to infiltrate an alien-rights organization which has been interfering with the Federation's plans via terrorist attacks. Complicating things, Abraham has 'gone native', and begun to agree with his enemy's goals, if not their methods.

In an attempt to settle these differences, the player will find themselves guiding Abraham through a series of resource-management exercises. Whether taking hostages, enduring torture, or desperately trying to cure a plague, the gameplay centers around keeping a close eye on everyone's mood/vitals and keeping everything as well-balanced as possible. This takes different forms in different levels—at one point the player might have to decide whether to shoot a hostage to keep their other cowering victims in line, while in another they could find themselves begging to have their own tooth torn out in order to save their best friend's life.

The situations are extremely interesting, and the developers do a good job of making it seem like the stakes are high enough to justify the extreme options they're presented with. After all, if stopping a planetary genocide is the goal, what isn't justifiable to achieve that? These are the kind of questions the game is asking… Or at least seems to be. Just a few chapters in, it became clear that the game wasn't interested in my answers.

No matter what steps I took to resolve the tense situations, it was as if the game didn't care. I finished a chapter with a particular character dead. Before restarting the chapter, I let the intro for the next level play out, and I was surprised to discover that the character in question was fine. Not only was the story NOT branching based on my decisions, but, through the use of a weird glitch-esque visual effect that introduces the resurrected character, it was going out of its way to let me know that it had reset everything back to the status quo, irrespective of my actions.

This design decision upends everything players have been conditioned to expect from morality systems in video games. Players are used to relationships and storylines shifting irrevocably when choices are made, but GWBW doesn't concern itself with anything so mundane as letting actions have consequences. While the game is purportedly about the fate of the universe, it asks players not to worry about all that, and wants them to dwell solely on their feelings about the main character's hard decisions.

This becomes clear in the game's final chapter where subtext becomes text, and it's revealed that the main character is trapped in a Groundhog Day situation, living the same seven years over and over—the fate of individuals and the decisions the player makes aren't important because no matter how badly one chapter ends, they'll enter the next as if it had an optimal resolution. Agency is stripped away to ensure that the story continues unaffected—not an uncommon occurrence in games, but in a game that purports to be entirely about decision and consequence, it's jarring.

In addition to the story and conceptual problems, during two of its seven chapters, the gameplay becomes so divorced from its own internal rules that the result is disastrous.

For the first four chapters the story is tightly contained, with narrow deadlines to complete a mission in a single location. Then the fifth chapter gets ambitious, and stumbles badly. Tasked with escorting a team of soldiers through a desert, logic problems pile up, almost entirely centered around the wholly necessary (yet terribly designed) scouting system. Even worse is the game's final chapter, which takes the interesting premise of playing the same fight over and over until it's done correctly, then institutes an element of random chance that turns it into a frustrating slog.

In the last moments, the player is asked to make a decision supposedly outside of the endless Groundhog Day cycle—a decision that will set the rest of human history on one course or another. Then it's time for one last joke on the player—even that purportedly final decision doesn't matter, because this isn't a game about the fate of trillions of sentient beings all across the universe. It isn't even a game about whether or not the player can change the mind and heart of the most important man in the galaxy, even though we're told time and again that it is. This is a game about players making choices that don't matter about the lives of people who aren't real.

Like the eternally reoccurring punishments that characterize the wrath of the Greek gods, Sergeant Burden is stuck in an inescapable cycle of torment and suffering, which the player is invited to briefly share. The game offers nothing but misery for misery's sake. Why? Maybe the titular Gods could say. But as far as I can tell, they only watch. Rating: 3 out of 10


Disclosures: This game was obtained via publisher and reviewed on the PC. Approximately 9 hours of play was devoted to single-player modes (completed 2 times).

Parents: This game has not been rated by the ESRB. However, don't let your kids near this. Other than all the exploding heads, there's the fact that it's a solipsistic slog through misery, built around the idea that the human experience outside of the main character's head is completely unimportant.

Deaf & Hard of Hearing: It's a pixel-art game where all dialogue is text, and there are no gameplay-dependent audio cues. Go nuts!