Pulling Mohair Over Their Eyes 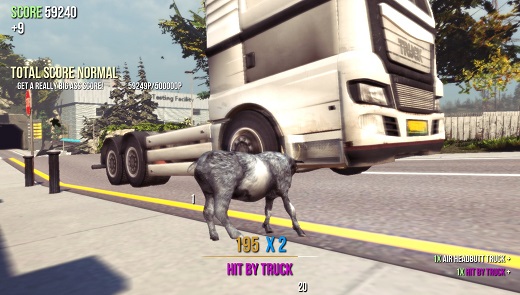 LOW Getting stuck in level geometry every couple of minutes.

WTF Everything. It's a goat simulator, people.

How much is a joke worth, financially speaking? If the joke is on the person paying for it, does that make it more or less valuable?

I pose these questions at the beginning of this review of Goat Simulator because it's important to understand that this 'game' is, on a fundamental level, a joke at the expense of anyone playing. That's not necessarily a negative thing, as there are many out there who can laugh at themselves for being tricked into participating in ridiculous activities.

But, this again raises the question—how much is that experience worth?

I would argue that ten dollars is a little too much. Just look at the title and try to deny that the whole thing is a prank, since the game is less a goat simulator than it is a threadbare entry in the chaos and destruction genre—a Katamari Damacy without the wit, structure, or awesome soundtrack.

(It also features a scoring system cribbed from Tony Hawk games, but it's only there to perpetuate the illusion that this is a traditional video game, rather than an elaborate gag.)

As the player starts. they're put in the hooves of a goat and given free rein to explore two linked maps, headbutting and licking anything they like, while using a handy double-jump to explore the largely vertical environment.

Chasing any kind of a score immediately reveals itself as a fool's errand, as the goat's controls are flat-out terrible. Running in a straight line works well enough, but once I started trying to turn left or right things got dicey, and it was all downhill from there.

The goat's incredibly floaty jump makes climbing things far more difficult than it should be, and the lick and headbutt commands—functioning as, respectively, 'pick up' and 'shove'—are wildly unreliable, forcing the player to attempt completely logical plans over and over again not because there's anything wrong with their theory, but because the game's physics engine is so wonky that there's no way to predict the effect that any action is going to have. As an example, I must have spent twenty percent of my total playtime being launched through the air for no discernible reason—at least when I headbutt a car until it explodes, I understand why I go cartwheeling into the nearest cornfield. What, then, is the connection between jumping on a watermelon and being launched into the stratosphere?

To the game's credit, there are a fair amount of gags and easter eggs buttressing the main joke of the game's existence with things like monuments to destroy, aliens to contact, and Satanic altars to sacrifice the innocent upon. However, even with a good amount of secret areas, there just isn't much to the game, and everything can be completed in just a couple of hours.

With sketchy gameplay that focuses on being zany fodder for YouTube videos and gags that quickly run out of steam, even those excited about the prospect of flailing about as a bleating goat will grow weary of Goat Simulator sooner rather than later and realize that they're the butt of a joke authored by the game's developers. In their defense, it's not like the developers have been subtle about the fact that Goat Simulator is a complete mess.

I appreciate the developers' commitment to a gag, and as a piece of conceptual comedy Goat Simulator has few competitors in the world of video games. Still, when there's not a huge difference between playing the game and watching compilation clips of it online, potential buyers must ask themselves whether it's really worth ten dollars for the opportunity to feel buyer's remorse soon after. Rating: 3 out of 10


Disclosures: This game was obtained via publisher and reviewed on the Xbox One. Approximately 3 hours of play was devoted to single-player modes, and the game was "completed".

Parents: According to the ESRB, this game contains violence. You don't have to worry about your kids with this one. No swearing or drugs, the violence is generally cartoonish. The only questionable part of the game is the pentagram where players are expected to sacrifice innocent bystanders to unlock certain goat powers. That could easily lead to some interesting conversations.

Deaf & Hard of Hearing: You'll be just fine—there's no story or audio cues, and directions are clearly written as text onscreen.

Considering all the insanity this game contains, I’m surprised there isn’t an Easter egg where the goat encounters Andy Kaufman. Sounds like something he’d appreciate.