Information control is one of the most vital components of storytelling—deciding when and how your audience gets pieces of information can be almost as important as the details of the information itself.

This is yet another place where Deadly Premonition

breaks ranks with video game convention. If the player is strictly following the storyline there’s a proscribed time and place for York to meet all of the town’s denizens. If, however, York and Zach decide that getting to the police station and starting the plot isn’t a priority, then the the two of them are free to meet almost all of the game’s characters at their own pace. 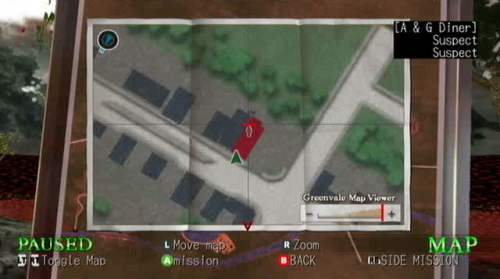 See the little grey guys on the map there? That’s two of Greenvale’s twenty-odd residents. Once York has met them they go from being a grey “Suspect” to being either pink or blue, with a proper name attached. Once that’s been accomplished, the player can keep track of the characters’ movements around town if they feel like it. There’s a more important reason to meet everyone in Greenvale, though—because it’s the kind of thing that an FBI Agent might actually do in this situation, driving around town and interviewing people around the case on their own turf, where they feel most comfortable, and willing to talk.

The player has the option to play Deadly Premonition like a normal video game, following the proscribed pathway until they’ve met everyone that they’re required to—the scene in which the introductions occur actually lines everyone up in a single large location, just so it can all be taken care of at once. It’s a perfectly satisfying sequence, and one that acquits its purpose adequately—but the player who rushes through the experience risks missing out on the unique conversations that York can have with characters.

Take, for example, this conversation that York has when meeting Olivia for the first time:

Or when he first meets Thomas, dropping by his apartment unannounced, in the middle of the night, during a rainstorm.

Giving the players options like these feed into the overall sense that Greenvale is a real place, and that the people who live there go on living even when they’re not in a room with York, giving him a clue or assigning a mission to accomplish.

Compare this to something like Grand Theft Auto IV, which is an almost shockingly shallow depiction of a working world. Once, on a whim, I decided to follow a prostitute and her John around town to see where he drove after picking her up. A minivan pulled over in the warehouse district and a prostitute walked over to speak with the driver. They talked for a moment and then she climbed inside. Riding a motorcycle I tailed the couple, remaining a discrete distance behind, of course. I assumed that at some point they’d reach a location, the transaction would be completed, and then the prostitute would leave: Verisimilitude Accomplished!

It never happened, though. I tailed the car for nearly 12 in-game hours without any further incident. As the sun rose over liberty city, I realized that nothing was ever going to happen—their roles as hooker and john had disappeared as soon as she climbed into the car. Once that was over, they were just another random bit of traffic, following a new AI routine. I wound up with the same results when I picked a random person in downtown FakeManhattan and walked behind him for half an hour. Over the course of ten in-game hours the man never went into a building or met with anyone. He just wandered aimlessly around Liberty City until I got bored of watching him. 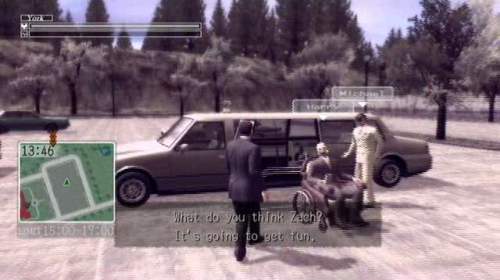 That’s Harry—every day at lunchtime his valet Michael drives him in his wheelchair-converted limousine down to the A&G diner, where they collect a lunch, and then drive back to his mansion at the edge of town. 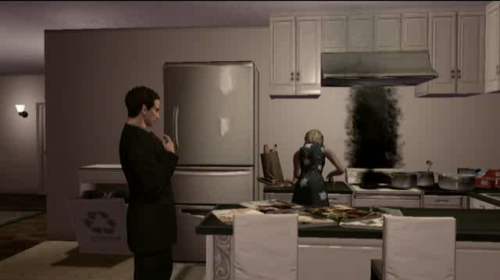 Remember Emily, the Sheriff’s Deputy? Most nights after work she drives to SWERY ’65, a local bar and has dinner there. When it’s raining however, she’ll stay home and cook dinner for herself.

Everyone in town has patterns of behaviour, places they like to spend time, people they like to hang out with… there’s so much activity that you could spend hours just following people around and watching their routines. There aren’t a lot of characters in Deadly Premonition, but each one has a distinct personality and depth that few games attempt, let alone achieve.

The most important thing to note here is that this is yet another way that Deadly Premonition accomplishes things that couldn’t work in any other medium: letting the player become a co-author in the story. It manages this by having far more content than the story requires. Films have a proscribed length that they can’t violate, limiting the amount of story they can feature. Even in the most digressive novel the author must decides the order in which the characters are introduced, and how much coverage they receive—editorial decisions that determine how the audience will react.

While this is true of Deadly Premonition as well, it’s true to a far lesser extent—there’s so much content to be seen and experienced that players get to decide just how deep an experience they want—and they have to want the experience. This isn’t a traditional video game experience where characters talk to NPCs to hear that person’s life story and obtain a quest, then get rewarded at the end of it with an item and a little closure for the story they heard at the start. Sallie Graham will never have useful information to offer about her daughter’s murder. The player can watch her wail and gnash about the death of her daughter, they can learn her backstory, and follow her to SWERY ’65 where she drinks for hours before retiring to Richard’s trailer, looking for some solace in the arms of her first love. There will be no reward for any of these activities, beyond a deeper understanding of just how well-conceived Greenvale and all of its inhabitants are.

It can be argued—I am, in fact, arguing—that it’s the best-realized location in history of video games.

Next time around, the plot begins in earnest, and York Morgan slams into a wall called “genre convention”. And it’s every other horror game that gets injured. And heck, since you’ve already bought a copy of all those other horror games, why not pick up a copy of Deadly Premonition! Still under twenty dollars at Amazon.com

! Okay, it’s only four cents under twenty dollars, but come on…

Next time: The Squirrel Detective (Deadly Premonition is the Game of the Year, Part 9)

While I wouldn’t go as far as to say this is the most emotionally consuming game I have ever played, I can say that it’s been years since I enjoyed a game as much as this. A game that I would feel irresponsible to recommend to people due to its glaring flaws, but I’m more than happy to give away copies because people should at very least give it a go.

I thought I’d made this clear, but let me try again – if I can do anything to make it easier for someone to buy a copy of Deadly Premonition, I will. A link to Amazon is the best way of doing that, because there’s guaranteed to be a copy there that you can buy immediately. A link to eBay might offer people a better deal, but it couldn’t guarantee that a copy would be available the moment someone wants to buy it, which is the goal. I mean, I’ve already given away two copies myself, but I can’t do… Read more »

Agreed, fantastic realisation of a game world – the best ever – and excellent kooky characterisation makes this a game to remember. Just a real shame about the netherworld zombie killing sections of the game.

You can’t have the good without the bad in my opinion and I feel this makes it fall short of ‘game of the year’ material….

Wow, you’re still writing about Deadly Premonition? Thanks very much for a great series, so thoughtful and well-written. I’ve been thinking a little about this – the emotional power of the game is, pretty obviously, in the non-interactive cut scenes, in the narrative. At its most basic level, the game is just a vehicle for delivering you from one cut scene to another. This should be a problem, in that it removes the potential for the player to make a meaningful impact – it takes all the choice away from the player, and leaves him with little impact on the… Read more »