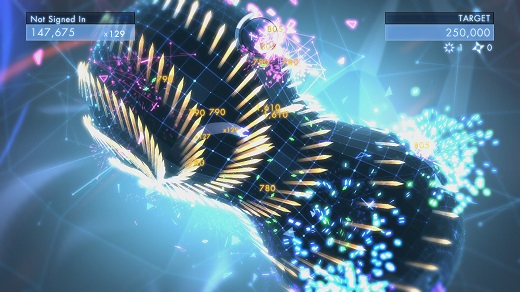 LOW A rammer lunging in from offscreen at the worst possible moment.

Geometry Wars 3 had an unbelievably low bar to clear in order to be a success.

As the sequel to what is arguably the best twin-stick shooter ever made, if its developers rereleased it for current systems with nothing more than slightly improved graphics, it would've been cause for celebration. With Dimensions, however, they've gone above and beyond, not only giving players every bit of content from Geometry Wars 2, but also adding a new adventure mode that takes the already-impeccable mechanics and applies them to a series of innovative, addictive challenges.

It's a show of how confident GW3's developers are in the aesthetic that the graphical changes made are so minor and unobtrusive. Yes, two-dimensional wireframe shapes have now been rendered as shiny polygons, but none of the character has been lost. With vibrant colors and distinct designs, all of the enemy types remain instantly recognizable—after just a few minutes, any player will be able to instantly know what a flash of color means and exactly how they should respond to it.

While the visuals remain familiar, the big change comes in adventure mode—the playfield has transformed from a simple rectangle into huge three-dimensional shapes that players guide their ships along the surface of. With each facet of these shapes offering two-dimensional action, the developers have changed and deepened the mechanics of play.

Navigating these shapes take a little getting used to—it's a bit jarring to go from a standard playfield to spinning around the outside of a giant peanut. But, they are uniformly excellent in their design and used to incredible effect across the game's 50 adventure levels. Even better, at no point is an area strangely-shaped just for the sake of being unusual. Whenever I found myself flying around a globe or skirting the edges of a giant die, it was invariably because the developers had come up with a clever set of enemy locations designed to use the terrain to push my skills to their absolute limit. Whether by trapping me in a cylinder covered in rotating death walls, or fighting a boss on the inside of a dome, every bit of adventure mode provides an interesting and unique challenge.

Beyond fantastic level design, the developers change things up by adding drones and a new power-up system to the mix. The drones are cute little shapes the follow the player around and help out in combat. Their abilities include collecting items, ramming enemies, providing a second stream of fire, and more. Each one is useful in its own right, and none feel out of place in the Geometry Wars world.

The power-ups are handled in an equally interesting fashion—from time to time, a collection of bonus crystals will appear in a shape designed to evoke one of the power ups. By avoiding enemies while destroying all of the pieces, players will gain double firepower, homing weapons, or defensive explosions for a limited amount of time. It fits right in with the game's core mechanics, never feeling cheap or like it's too much of an advantage.

The only flaw I could find in Geometry Wars 3 is the developer's stubborn insistence on keeping the slightly-too-close camera from GW2. Everything about this game has the feel of a classic arcade experience, and the original Geometry Wars understood that being able to see the entire playfield allows players to change their plans dynamically as new enemies appear. In Geometry Wars 2, the camera was moved in, allowing the player to only see between 30-60% of the screen at a time, artificially increasing the difficulty by giving enemies a chance to spawn offscreen and take the player by surprise. It was the one mistake that the otherwise-perfect GW2 made, and I'm sad to see it repeated here. I'm perfectly fine with enemies spawning on the other side of a giant rotating capsule, but when they're out of sight due to the developers intentionally making their own game less playable, I can't sign off on it.

That one flaw doesn't keep Geometry Wars 3 from being a masterpiece, though. Whether it's getting 10 million points in a game of Waves or the near-zen state that a great run of Pacifism can put players into, Geometry Wars 3 offers the best possible twin-stick experience by taking everything great about the series and finding new ways to employ it for the ultimate retro shooter playground. Rating: 9.5 out of 10


Disclosures: This game was obtained via publisher and reviewed on the Xbox One. Approximately 6 hours of play was devoted to single-player modes, and the game was completed. Multiplayer modes were not sampled due to server issues.

Parents: According to the ESRB, this game contains nothing worth warning about. Let your kids play all they want—you are not going to find more acceptable violence anywhere. Exploding blocks is the most harmless aggressive action anyone can take. I encourage them to use this game is a tool to develop their hand eye coordination and hopefully learn how to cope with frustration along the way.

Deaf & Hard of Hearing: No problems at all on this front—there are no audio cues to hold you back.