Before I started looking back on 2007 I wanted to do a little housecleaning. Last year, for a variety of reasons (website changeover, forgetfulness) gamecritics.com neglected to offer our nomination for the videogame of the year. And I'm glad we didn't. If we had, I would have ended up naming Urban Chaos as game of the year. While itself a fantastic game, UC can't hold a candle to the actual game of the year, but since I wouldn't actually play that game for another two months, I couldn't possibly know just how perfect it was. Of course, I'm talking about the best FPS ever made, Rainbow Six: Vegas. 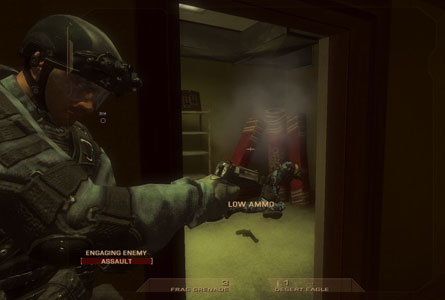 I've got a long history with the franchise, you see. As FPSs were first experimenting with the wonder of polygonal worlds in Duke Nukem, I was already bored of wanton bloodshed and desperately seeking realism. Where were my headshots? Where was the brutal difficulty level? Why can't I play with other people instead of just against them? Most importantly, why wasn't anyone making an FPS version of Hostage, which up until that time, was the greatest video game ever made. My prayers were answered by a little thing called Rainbow Six. Based loosely in the world imagineered by right-wing techno-thriller writer Tom Clancy, R6 told the tale of a bunch of special forces operatives who had to shoot up Euro-Disneyland to stop terrorists from executing tourists. Sure, there were other missions, but that one really stuck in my mind, as the poor approximation of Disneyland was far more charming than the poor approximations of jungles or bio-domes. 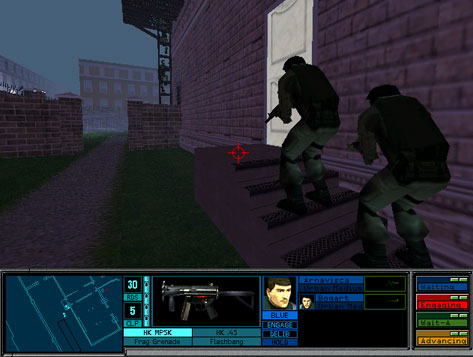 For all of its dream-answering qualities, though, Rainbow Six was a bit of an odd duck. At its core the game offered a stunningly good realistic FPS experience. Wrapped around that core, however, was an in-depth to the point of being tedious mission planning system. Since the player was expected to control three teams of up to 12 people at once, there obviously had to be a strategy component to the game. It was just too bad that the strategy component was so restrictive. Players were given a layout of the map and intelligence about objectives and possible enemy threats. Based on this information, the player was expected to come up with an elaborate mission plan, with three teams moving in unison to carry out objectives. Nothing particularly wrong with that, except for the fact that a small mistake in the planning stages would result in a failed mission-it was all but impossible to call an audible and change plans during a mission, leaving the player facing down the task of heading back to the planning screen and trying to figure out what went wrong. Rainbow Six was a shooter where the player spent far more time planning how to blow away terrorists than actually murdering them. Realistic? Absolutely. Fun? Significantly not. 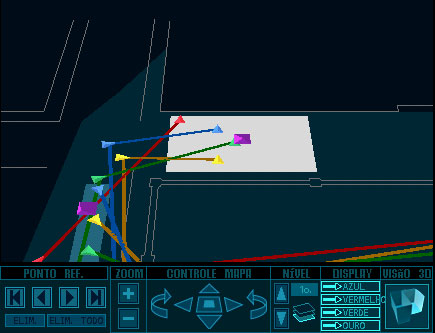 I'll wager that the developers were proud of the fact that they had a planning system so in-depth that if the player did everything right, the AI commandos could complete the mission without any direct input. They shouldn't have been. Luckily, there was another way to play the game. If all planning was thrown out the window, and the player elected to just 'wing it' and sneak through the levels, killing people with silenced weaponry, it went from a staid, borderline dull experience in careful strategisation to the most gruelingly realistic FPS ever devised. Each level was a master class in stealth gameplay, demanding the utmost care when moving or attacking. Every enemy was always on high alert and ridiculously, inhumanly accurate with their firearms. 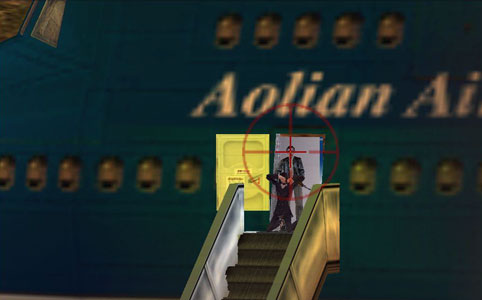 I was extremely pleased when subsequent games reflected my tastes rather than those of some hypothetical sim-lover out there in the gaming community. By Rainbow Six 3 guns were visible onscreen, allowing for realistically complex reloading animations (the secret obsession of the FPS nerd), and the series made great strides forward in co-operative gameplay, replacing planning tedium and questionable AI with real-life friends to help me kill my way through the missions. Not everything was a step in the right direction, of course. Sadly both graphics and playability took a bit of a hit when the console-exclusive titles came out. In addition to the downgraded textures and smaller, more linear locations, the pinpoint accuracy previous games required had been replaced by a large targeting circle, which the player just had to put somewhere in the general vicinity of an enemy to ensure a kill. 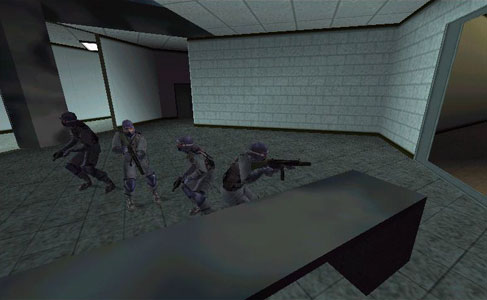 This trend towards playability and excellence reached its apex with the release of Rainbow Six Vegas. From the beautiful graphics to its seamless control scheme, R6V was an unmatched experience in gaming perfection. Its secret? Ripping off kill.switch. Sure, games have been ripping off kill.switch ever since that game was released, but R6V was the first FPS to full implement a cover system. Every time the player needs to get behind cover, the camera pulls back to a 3rd person perspective, giving the player the opportunity to take potshots at enemies while marveling at the game's fantastic player and gun models. Not only is the system flawless in its execution, it makes every FPS without a cover system look positively archaic. Dinosaurs like Halo 3 and Call of Duty 4 were victims of parallel development, so their lack of any kind of cover mechanic can be understood, if not exactly forgiven. No FPS game whose development began after the release of R6V has an excuse for not endeavoring to steal all of its gameplay mechanics wholesale. The day of hovering back and forth from behind columns is over, it died with Duke Nukem's cultural relevance. 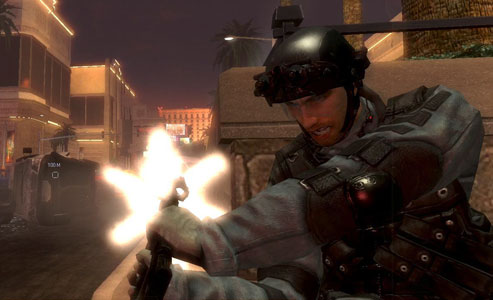 I had planned to review Rainbow Six: Vegas for the website, but found it to be so perfect, so unimpeachably wonderful that I was forced to recuse myself. How do you fairly and critically judge a game's merits when every moment played feels like the kind of euphoria that the beat novelists and poets spent endless, comma-free paragraphs attempting to describe after shooting up heroin? When all of your dreams involve murdering mercenaries with a silenced Mk. 23, how can you fault someone for making them come true? 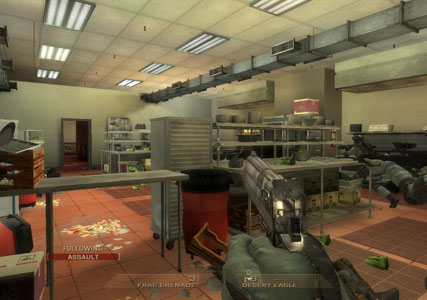 Just how good is Rainbow Six: Vegas? So good that I'm awarding it the first ever Game of they Year two-peat. That's right. Not only is R6V for the Xbox 360 the overall game of the year for 2006, but Rainbow Six: Vegas for the PS3 was the best game of 2007. Is it really kosher to give a game that wasn't originally released in 2007 the title of Game of the Year? No, not really. But that's how good Rainbow Six: Vegas is. It defies all logic and breaks down conventional methods of scoring games. 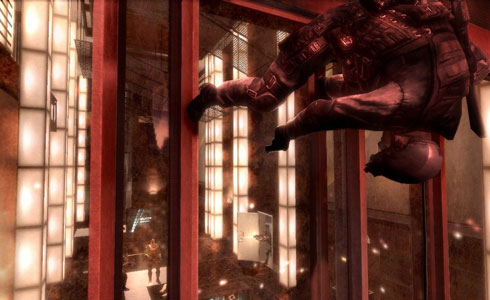 So the only question remains-will Rainbow Six Vegas be game of the year again in 2008? Probably not, since no plans to release it for the DS seem in the offing. Still, there looks to be a top contender for the title coming out early in the year: 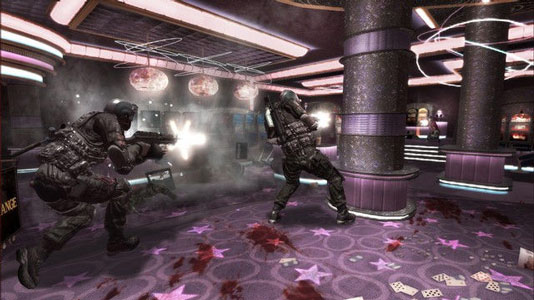 Are you serious? Rainbow Six Vegas? Game of the Year two years in a row? Wow…

Since I only picked one game, and announced that it was the best game of the past two years, the title seemed appropriate.

Are you sure you don’t mean “Games of the Year”?